The €219,000 figure excludes indirect costs, parking, siteworks and VAT which would bring the total cost of delivering the apartment to €440,000.

Paul Mitchell, one of the authors of the report, predicts construction costs will increase by up to 7% this year.

Similar to apartments, office construction costs have also risen significantly increasing by 10.7% in the past year.

“The cost increases are having a negative impact on viability because rents still haven’t recovered to 2019 levels at this point," Mitchell said. 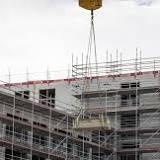 "That said there are still a lot of speculative office projects under construction in Dublin and in some other regional cities.

We are predicting costs will rise by between 6% to 7% this year although high energy price inputs may add increased costs in labour and demand.

According to the report, there was a 30% increase in the number of judicial reviews taken against the fast-track Strategic Housing Developments (SHDs) last year. The report points out that although planning permission was granted for 26,151 residential units under the SHD process, over half of them – 55% or 14,296 units - were prevented from going ahead because of judicial reviews.

Mitchell points out that on the one hand while nearly everyone agrees we need more supply, on the other the supply is being choked off by the increasing prevalence of JRs.

“While the country aspires to build more houses, the harsh reality on the ground is it’s just not going to happen unless we reform the planning process.

"The SHD process has been in place for four years and in that time 30% - or some 28,000 units – have been stalled in JRs. People generally have an issue with height or scale and are using the JR process, in some cases to challenge An Bord Pleanála permissions," he said.

The report forecasts 25,000 to 30,000 housing units to be built this year. Mitchel said 35,000 units – the figure most commentators believe is needed to meet demand – could be achieved in two to three years.

Prev: Oppo A11 to arrive in China with 48 MP camera