Home > HUAWEI > Jio Phone Next: here are the cheapest 4G smartphones it will compete against

Jio Phone Next is the company’s affordable 4G offering that was unveiled at the Reliance 44th AGM on Thursday. The handset is co-developed in partnership with Google and will run an extremely optimised version of Android. It may come with the usual Jio suite of apps, Google apps (including Play Store access), and Microsoft suite as well. The company aims to shift 300 million users stuck with the 2G network to 4G while keeping the cost of the Jio Phone Next in the affordable range. While the company hasn’t revealed the complete Jio Phone Next specifications and price in India yet, we can expect it to cost less than Rs 5,000. Let’s take a look at what to expect from Jio Phone Next and which handsets it will have to compete against.

Jio Phone Next as said has been co-developed in partnership with Google and will boot an optimised version of Android. The phone is equipped with features like a voice assistant for hands-free operation, automatic read-aloud of screen text, language translation, smart camera with augmented reality filters, and more. The phone has a typical boxy design, with the volume rocker and power button on the right. It has a single rear camera with an LED flash and a selfie snapper above the screen. The company promises to push fast software updates and optimisations. Jio Phone Next will be on sale from September 10th in the country. Price and specs are yet to be revealed by the company.

With that covered, here are 5 other cheapest 4G smartphones that Jio Phone Next will compete against. 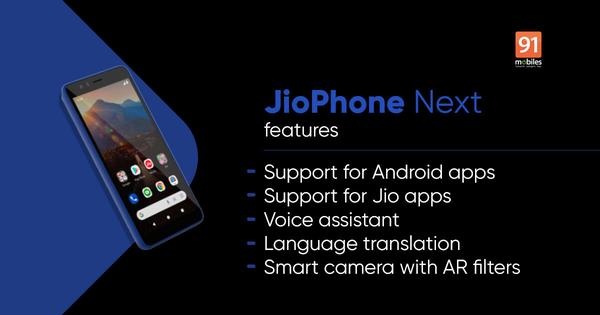 Nokia C3 is HMD Global’s affordable 4G offering. The handset originally launched in India back in August 2020 and comes with a 5.99-inch HD+ display and 18:9 aspect ratio. It is powered by the Unisoc SC9863A chipset paired with up to 3GB RAM and 32GB internal storage that will be expandable via a microSD card. The phone boots Android 10 out of the box and packs a 3,040mAh battery that charges over a micro-USB port. It is equipped with a dedicated Google Assistant button for easy search and a 3.5mm audio jack. The Nokia C3 has an 8MP primary camera on the back and a 5MP sensor on the front for selfies and video chats. There is a rear-mounted fingerprint sensor for security.

Realme C20 is the cheapest 4G phone from the company that launched in India back in April. The handset flaunts a 6.5-inch HD+ display with 720 x 1600 pixels resolutions, Corning Gorilla Glass 3 layer, and 89 percent screen-to-body ratio. The phone ships with the MediaTek Helio G35 SoC coupled with IMG PowerVR GE83220 GPU, 2GB RAM, and 32GB internal storage that is further expandable via a microSD card up to 256GB. It runs on Android 10-based Realme UI custom skin on top and packs a 5,000mAh battery with 10W charging support. Realme C20 has a single 8MP sensor on the back with an LED flash and a 5MP shooter on the front for selfies and video chats. Connectivity features include dual-band Wi-Fi, Bluetooth 5.0, GPS, and a micro-USB port.

Redmi 9A is the cheapest 4G enabled phone from Xiaomi. To recall, the phone sports a 6.53-inch HD+ display with 1600 X 720 pixels resolution and a waterdrop notch for the selfie snapper. It is powered by the MediaTek Helio G25 SoC coupled with IMG PowerVR GE8320 GPU, up to 3GB RAM and 32GB storage that is further expandable via microSD card. The handset runs on Android 10 OS with MIUI 11 custom skin on top and packs a 5000mAh battery. Redmi 9A has a single 13MP primary camera with an LED flash. On the front, there is a 5MP snapper for selfies and video chats. Connectivity features include 4G LTE, Wi-Fi, Bluetooth, GPS, and a 3.5mm audio jack.

Also read: A closer look at Jio Phone Next, the ultra-affordable 4G smartphone from Jio and Google

The Lava Z1 is a ‘Made in India’ phone and is also one of the cheapest 4G offerings in the segment. It sports a 5-inch display with sizeable bezels above and beneath the screen and is powered by the MediaTek Helio A20 SoC paired with 2GB RAM and 16GB internal storage that is further expandable via a microSD card. The phone has a 5MP snapper both on the front and on the back. The company says the phone is military-grade certified and is equipped with Corning Gorilla Glass 3 layer and a 3,100mAh battery.

Lastly, we have the itel A23 Pro. The handset sports a 5-inch FWVGA display with a 16:9 aspect ratio and 854 x 480 pixels resolution. It is powered by a Unisoc 9832E quad-core processor paired with 1GB RAM and 8GB onboard storage that is further expandable via a microSD card up to 32GB. It runs on Android 10 OS out of the box and packs a 2,400mAh battery with no fast charging support. The itel A23 Pro has a 2MP sensor on the back with LED flash and a VGA lens on the front for selfies and video chats. Connectivity features include 4G LTE, Wi-Fi, Bluetooth and a microUSB port.