Tough doesn’t have to mean ugly anymore now that HMD Global has introduced the Nokia XR20 smartphone, which it says “can withstand anything life throws at it and look great doing it.” That’s quite a bold claim when, by necessity, rugged phones usually look like they’re hidden inside a chunky, rarely very attractive case.

But does this mean the XR20 is a tough phone for everyone, regardless of whether you spend time in situations where a lesser phone would be pulverized in moments or not?

The Nokia XR20 effectively straddles the world of tough phones and chunkier mainstream models by avoiding protruding bumpers and slash cuts on the rear panel to symbolize ruggedness. It also sports a subtle blue hue instead of a black or yellow color scheme that just screams “danger!” While it’s obviously not a mainstream phone like the OnePlus Nord 2, it won’t only look at home covered in dust and thrown haphazardly in the cab of a piece of heavy machinery either.

Just take a look at some of the details. I like the exposed aluminum metal chassis down the side of the phone and the simple X pattern on the camera module, for example. But Nokia hasn’t forgotten what the phone is really all about, despite these neat visual elements, by including a cutout for a lanyard strap, a textured polymer rear panel for more grip, and a programmable emergency button, too.

One-handed use is practically impossible if you have small hands.

It’s a chunky beast at 10.64mm thick and 248 grams. A slender plastic shell covers the phone, effectively looking like an ergonomic tough case on a slimmer phone and providing it with “military specification” MIL-STD-810H certification and an IP68 rating. This means it has survived drops from 1.8 meters and being in water down to a depth of 1.5 meters for up to an hour, along with resisting exposure to dust and plenty more. It has Gorilla Glass Victus over the screen.

It’s a very wide phone, and one-handed use is practically impossible if you have small hands, but it’s comfortable and natural to hold as it does not have any protrusions or guard sections on the body. There’s a subtle raised lip around the screen to protect it when placed facedown, but it’s not so extreme that you feel it each time you swipe through menus.

Unusually for a phone review, I’ve deliberately dropped the XR20 and put it in water, too. It’s still working as you’d expect after various dunkings and drops from waist height onto a variety of surfaces from grass to gravel. The hard plastic shell has picked up a scuff already, though, suggesting that while it looks pretty now, it may not for that long if it gets really abused. That’s the price you pay for the XR20 looking vaguely normal. I do like the confidence to be able to give it a quick, mildly soapy scrub down, though.

The Nokia XR20 isn’t a catwalk model, but it’s not made only for the building site either. It definitely wants to cross into both worlds, but once we get into the rest of the phone, it becomes clear that while it’s all dressed up, the beauty is only skin deep. It’s not a criticism, just don’t mistake it for something it isn’t. If I was a surfer, weekend hiker, or someone who worked in environments that didn’t favor electronics generally, it really fits the bill. Not really as a primary phone, but certainly as a second “lifestyle-friendly” phone.

The camera module may look like it contains three or four camera lenses, but in reality, it has two, with the other two spots taken up by two flash units — a dual-tone LED and a single LED. Inside a hole-punch cutout at the top center of the screen is an 8-megapixel selfie camera.

The rear dual 48MP main camera and 13MP wide-angle camera setup means the XR20 is never going to be a camera superstar, and sure enough, it can’t compete with phones designed with camera performance in mind. Color balance, white balance, and dynamic range are all over the place, and rarely do two photos have the same tone. Inconsistency continues when you switch to the wide-angle. 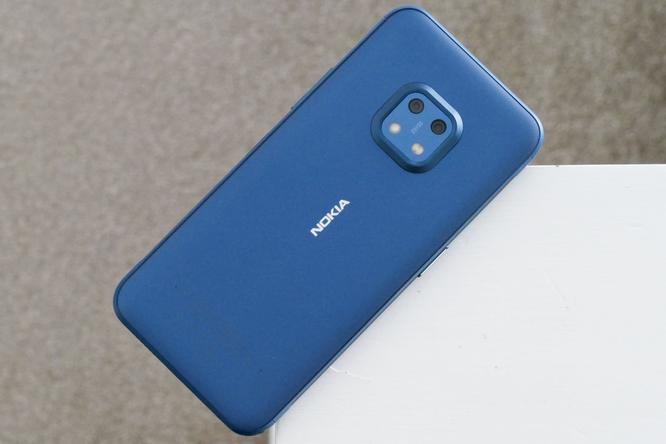 It may wear the Zeiss name, but the Nokia XR20’s ability doesn’t live up to it. It’s not worth judging it too harshly because Nokia really isn’t selling the phone as a top camera performer, and the photos it does take are mostly acceptable in decent lighting, but if you’re at all interested in taking really good photos and having some creative fun with a camera, this isn’t the phone for you.

There are a lot of buttons on the Nokia XR20. The Google Assistant button on the left of the chassis is large and easy to locate, which also means you will definitely press it by accident. There’s a programmable button on the top of the phone that can be set to perform a single action like turning on the flashlight or dialing an emergency contact after a long press. It’s almost flush with the body, so it’s unlikely you’ll do this by accident.

The fingerprint sensor is inside the power key and is centered on the right-hand side of the body. Annoyingly, I find my finger naturally presses the volume down key above it when picking up the phone, something not helped by the small sensor being flush and not having any texture to help locate it. It’s reliable when you do find it, and a speedy face unlock system is there as a backup.

It has enough power for general tasks.

A Qualcomm Snapdragon 480 processor with either 4GB or 6GB of RAM makes the XR20 a midrange phone. It has enough power for general tasks, and I’ve had no problems browsing, using social networks, swiping through Google Discover, and editing photos. The difference between it and more powerful phones is mostly found in overall speed when performing tasks like starting up the phone and apps or gaming. In these instances, the XR20 is a little slower to react. It’s not annoying in most situations, but it can be when you want to multitask or just get things done quickly.

You’ll also notice the power shortcomings when watching video and playing games, where there are sometimes a few stutters when watching 1080p movies. The 6.67-inch, 20:9 aspect ratio, 1080 x 2400 LCD screen has sizable bezels around it, and it sadly only has a 60Hz refresh rate. The screen sits “under” the bezel, making the design look a little antiquated. The 550 nits brightness doesn’t sound like much, but it’s legible in sunlight.

Watching Carfection’s Ferrari Portofino M review reveals good viewing angles and a pleasing color palette. It’s a good screen for a midrange phone, but it’s not very modern and many mainstream phones have the more desirable higher refresh rate. There are two speakers, but the stereo separation is minimal, with most of the volume — of which there’s plenty — coming from the speaker on the bottom of the phone. The phone playsAsphalt 9: Legends relatively smoothly and doesn’t get hot. The overall weight of the Nokia XR20 means it’s not really the ideal video or gaming partner, and the Snapdragon 480 lacks the guts to impress.

Android One is neatly designed and laid out in the same way as on a Google Pixel phone, so it’s very easy to use and I haven’t experienced any reliability issues.HMD Global promises three years of version updates with the phone, and four years of security updates, which is excellent. It has 5G provided you have coverage in your area and NFC for Google Pay, plus there’s a 3.5mm headphone jack, but the Wi-Fi connection struggles to maintain a weak signal compared to other phones.

The 4,630mAh battery is very strong and returns two days of life even when you’re playing games or watching videos, as well as making a few calls. It’s great to see 15-watt wireless charging included, plus there’s 18W Quick Charge 4.0 wired charging, too. However, there’s no charger included in the box, so the actual charge speeds will depend on the charger you end up using.

An uninspiring camera, a 60Hz refresh rate screen, and a Snapdragon 480 processor is a recipe for a phone that costs $250, but the Nokia XR20 costs $550. While it may look better than the majority of tough phones, it’s still a tough phone — and a good one — at heart, and you’re paying for the engineering and certification that goes into making it so, rather than a camera- and processor-centric spec list.

The XR20 will almost certainly outlast phones that cost half as much, and still look decent when you take it out on the town.

The story often ends here, meaning the ruggedness is really the only reason to buy, but that’s not quite the case with the XR20. It’s not just the body that makes it built to last — there’s real longevity elsewhere, too. HMD Global promises three years of Android version updates and four years of security updates. It’s also covered by a three-year warranty if purchased in the U.K. or Europe, complete with a one-year free screen replacement guarantee. Warranty details for the U.S. differ, and HMD Global indicates it will come with a two-year extended warranty.

Combine this with the tough body, Gorilla Glass Victus, and IP68 water resistance, and you’ve got a phone made to last until 2024 and beyond. The performance may not deliver much value, but the updates and warranty do a far better job. As a second phone to use when things get muddy or rocky, the XR20 will almost certainly outlast phones that cost half as much, and still look decent when you take it out on the town.

Is there a better alternative?

The Nokia XR20’s rugged nature puts it up against the Cat S61 and Cat S62 Pro, both of which cost more but feature Flir’s thermal camera technology and a far more traditionally rugged design. The Cat S48c is older but can be found for a far lower price, as can the recent Motorola Defy.

If you want to spend around $500 on a phone without the rugged design, we recommend the Samsung Galaxy A52 5G. It does have water resistance and is made from plastic so it should be moderately hardwearing, but the screen and camera are superior to the Nokia XR20’s.

How long will it last?

As mentioned above, the Nokia XR20’s Android software will be updated for three years, and the security updates will continue on for another year after that. The warranty period varies depending on where you buy the phone, but it will potentially be covered for up to three years. That means you should safely be able to own and use the phone until at least 2024, plus it has 5G so you can take advantage of the fastest connection speeds as well.

Should you buy it?

Yes, but only if “needs to withstand harsh treatment” is at the top of your wish list.