Home > HUAWEI > Nokia XR20 review: A rugged handset but too many compromises

Formerly the undisputed king of rugged/seemingly indestructible phones, Nokia has decided to make a bit of a comeback in 2021, launching its first proper rugged smartphone in years: the Nokia XR20.

With 5G connectivity, a well-sized screen and a design that should be able to withstand some fairly tough knocks, the Nokia XR20 might be just the ticket for those that need a tough yet competent smartphone that can keep up with their everyday adventures.

Nokia XR20 review: What you need to know

It’s immediately obvious that the Nokia XR20’s biggest selling point is its rugged build. While most modern handsets are relatively dainty and delicate by comparison, the Nokia XR20 packs in robust features such as an MIL-STD-810H rating, IP68 waterproofing and a thick protective bumper surrounding its aluminium frame. The screen is also protected by a layer of Gorilla Glass Victus, which is tougher than anything we’ve seen previously on a Nokia handset.

Nokia is keen to point out that the XR20 is well supported for years to come, with a promise of three years’ worth of core Android updates (up to Android 14) and four years of monthly security updates. You also get an extended three-year warranty if you buy one in the UK.

READ NEXT: The best smartphones to buy

Coming in at either £399 or £450, the Nokia XR20 is an expensive smartphone for what it offers in terms of internal hardware, but it’s actually a reasonably priced choice if you compare it against other rugged handsets.

Admittedly, the tough smartphone market isn’t particularly extensive, but the main competition comes from the likes of the Ulefone Armor 9 FLIR, which costs £440 but has a smaller screen and lacks 5G. It does, however, come with an endoscope camera and FLIR thermal imaging, so it’s perhaps better suited for use on a building site or as an engineer's companion.

Alternatively, there’s the Blackview BV9900 Pro, which has an even smaller 5.84in display but also incorporates an FLIR imaging camera. It’s yet another handset that’s a little behind hardware-wise, however, and it can be tricky to track down in the UK. If you can find one, you can expect to pay roughly £520 or so.

Finally, we recently reviewed the Motorola Defy, which has similar rugged properties as the Nokia, but costs just £279. It’s much weaker than the Nokia XR20 when it comes to performance, however, with a smaller 720p display and support for only 4G connectivity.

Ruggedness is the obvious focus when it comes to the Nokia XR20’s looks. It’s a chunky handset that doesn’t exactly inspire at first glance, but the thick rubber bumpers that surround its exterior are a nice touch, and it feels as though you should be able to drop it onto any surface and it will bounce right back.

That being said, it’s reasonably sleek where it counts. It fits nicely in the hand, despite its plus-sized dimensions, and the textured rear is nice and grippy as well. To my eyes, it’s a better-looking phone than the Moto Defy, mostly since it doesn’t look like the sort of handset that’s only ever spotted on a building site. In fact, you can (almost) mistake it for a “normal” smartphone if you do spot one in the wild. 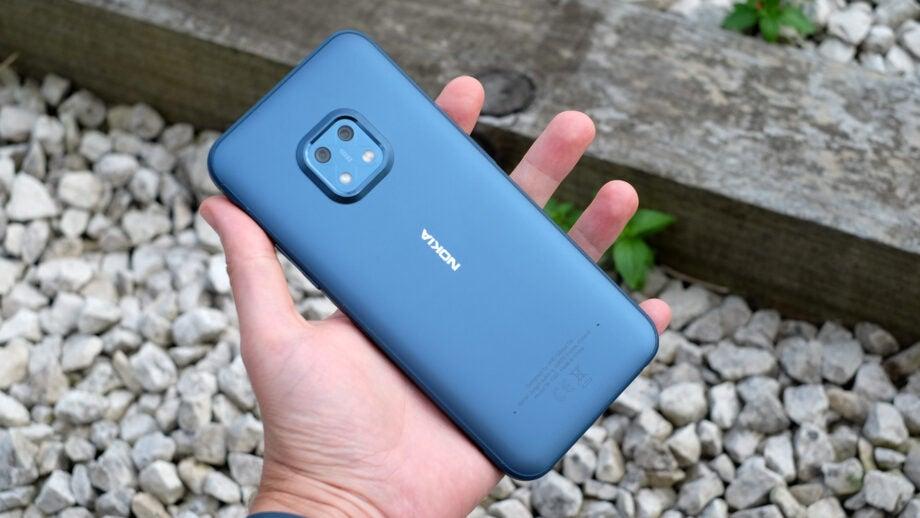 The front of the phone is covered by a protective layer of Gorilla Glass Victus which, according to Nokia, is its toughest screen yet. The XR20 is also IP68-rated for dust and water ingress protection, which means you can submerge the phone up to a depth of 1.5m for at least half an hour. And, like the Moto Defy, the MIL-SPEC-810H certification also means that it’s capable of withstanding temperatures between -25°C and 55°C, and it’s drop-tested up to a height of 1.8m.

A small pinhole notch sits at the top of the screen, hardly stealing focus, which is where you’ll find the 8MP (f/2.0) selfie camera. I particularly like the red emergency button, which is located on the top edge, next to the shared dual SIM and microSD card tray. When pressed, this can be used to quickly call any pre-selected emergency contacts.

On the right-hand side of the phone is where you’ll find the volume rocker and power button, which also houses the fingerprint sensor for secure unlocks. On the left is Nokia’s pesky Google Assistant button, which I often pressed accidentally. Just like Nokia’s other smartphones, you sadly can’t remap or disable it, either.

Finally, the USB-C charging port is sensibly situated on the bottom of the handset, sitting next to the 3.5mm audio jack.

The Nokia XR20’s FHD+ IPS screen is a big one, measuring 6.67in across the diagonal. If you’ve got small hands, you probably won’t be able to use it one-handed, and it’s quite unremarkable in the quality stakes as well.

To start with, it only supports a maximum refresh rate of 60Hz, which is a shame since cheaper handsets now support boosted refresh rates for a lot less money. Colour accuracy is on the weak side as well, with an average Delta E of 3.82 (lower is better) and coverage of just 85.9% of the sRGB colour gamut, with a total volume of 102%.

Still, at least the Nokia XR20’s pixel density of 395ppi isn’t too shabby, and brightness peaked at 556cd/m² in testing, which is perfectly readable if you find yourself outdoors and in bright sunlight.

READ NEXT: The best budget smartphones

At its heart, the Nokia XR20 is simply a variant of the Nokia X20, which unfortunately means it uses fairly unremarkable hardware. It has a Qualcomm Snapdragon 480 chipset for processing duties, which we last saw inside the £180 Moto G50, although it does have a healthy 6GB of RAM. Software-wise, the Nokia XR20 launches with Android One, which is a bloat-free version of Android 11, and is as close to a stock experience as it gets.

Nippy to unlock, there's still a moment's hesitation when opening apps, and the Nokia XR20’s Geekbench 5 multi-core score of 1,637 isn’t exactly sitting pretty at the top of the charts, either. With speeds roughly on a par with the Moto G50 and slightly ahead of the rugged Moto Defy, it’s all typically average stuff for the Nokia XR20.

Gaming performance paints a similar picture, with the XR20 pushing out an average frame rate of 37fps in the GFXBench Manhattan 3 onscreen benchmark. Most games should run just fine, but high-fidelity titles such as Call of Duty: Mobile might need to have some of their visual settings tweaked in order to get consistent frame rates.

With a 4,630mAh battery, the Nokia XR20 just about stretches to a couple of days’ use on a single charge. Lasting for little over 17 hours in our video playback test, the Nokia XR20 lags behind everything else, although the 15W wireless charging is a slight bonus.

It’s also worth mentioning that the Nokia XR20 doesn’t come with a wall charger in the box. In its absence, Nokia says that it will plant 50 trees for every device sold and will make a donation to the ClearRivers charity whenever you buy a separate wall charger in a bid to establish a plastic-free sea.

The Nokia XR20 comes with a pair of bog-standard rear cameras and an equally unremarkable 8MP front camera for selfies. There's a 48MP (f/1.8) main lens, which sits alongside a 13MP (f/2.4) lens for 123-degree ultra-wide shots. It’s a fairly simple setup, that’s for certain, and the results are suitably rather humdrum as well.

In terms of colour reproduction, the Nokia XR20 does a good job of capturing the sentiment of what you’re snapping, but there’s little to no vibrancy or general excitement to the images. Zoom in on stuff further into the frame – such as grass verges and tree foliage – and it mostly merges into a bit of a messy mush.

Low-light performance is more of a stand-out, and while colours aren’t wonderfully produced, the Nokia XR20 does a decent enough job of capturing detail. Night Mode isn’t the best, however, since this setting fails to cut through the darkness and generally softens the image a bit too much.

Software-wise, there is at least some assistance in the form of auto HDR, and it also recommends various shooting modes depending on what you’re pointing the cameras at. This is a nice gentle nudge in the right direction if you’re not usually snap-happy or you’re still getting to grips with what Android has to offer.

For videos, the Nokia XR20 is similarly limited but functional. There’s no 4K capture, with a maximum recording resolution of 1080p at just 30fps. Simple electronic image stabilisation adds a tiny amount to this very basic video capture setup.

READ NEXT: The best mid-range smartphones

A run-of-the-mill handset in almost every way, the Nokia XR20 won’t appeal if you aren’t already in the market for a tough-as-nails smartphone. For the same amount of money, you can do much better as far as specs are concerned, but of course you’ll miss out on the Nokia XR20’s near-indestructible qualities.

Paying extra for the reinforced screen, hardy design and rubber bumpers is the kind of decision that comes down to how you use your smartphone. If you have an active lifestyle or a physical profession, then you’ll know more than most just how easy it is to damage your phone, and that’s where the Nokia XR20 really comes into its own.

As a compromise, though, you’ll miss out on fast performance, a strong camera and a long-lasting battery, but that’s not to say any of these aspects aren’t competent enough. Over the next few years, you may find yourself more frustrated by the Nokia XR20’s speeds, but at least you won't have to worry about it getting damaged easily, and the 5G connectivity will help the Nokia XR20 remain relevant for years to come, too.