Realme India and Europe CEO Madhav Sheth confirmed the upcoming Realme 8 series phones in the previous episode of ‘Ask Madhav’. The company is yet to confirm the Realme 8i and Realme 8s launch dates in India just yet, expected by September in India. Realme 8S specifications have been leaked previously, and the new renders suggest that the upcoming Realme phone will come with 64MP-powered triple cameras, a side-mounted fingerprint sensor and an all-new special purple colour edition.

Realme 8S will sport a 90Hz 6.5-inch Full HD+ display running on MediaTek’s Dimensity 810 SOC offering 5G connectivity on a budget and Android 11. Realme 8S launch may happen alongside the entry-level Realme 8i.

Both the Realme 8 phones will soon launch in India. Realme already have a diversified Realme 8 series in the country offering three phones as of now: Realme 8, Realme 8 5G and Realme 8 Pro.

Here’s everything you need to know about the upcoming Realme 8S in India. 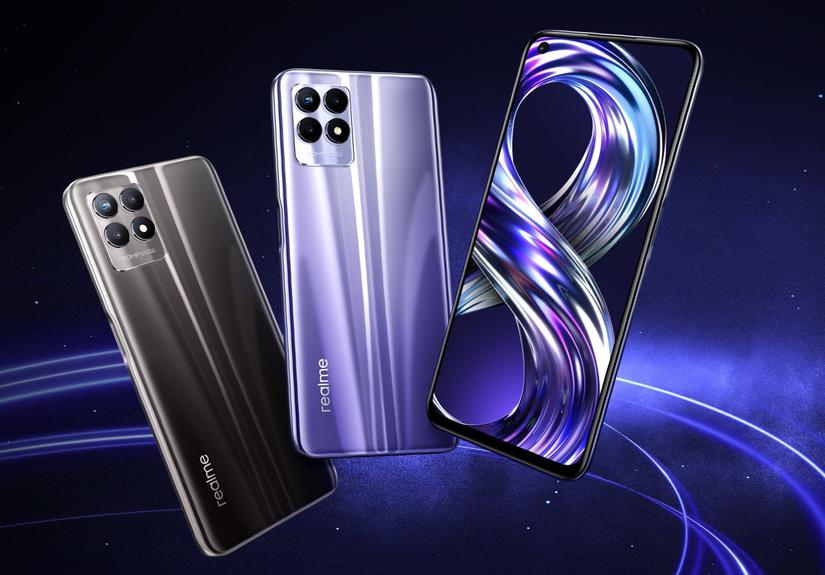 Realme 8S and Realme 8i India launch will happen by September, yet to be confirmed.

The current leaks suggest Realme 8i, Realme 8S launch date around September. Realme 8S and Realme 8i Flipkart availability will be confirmed soon as well.

The leaked Realme 8S design shows a very identical to other Realme 8-series phones with some minor changes in design language. The upcoming Realme smartphone will have the triple camerasm system arranged in a square module alongside an LED flash. The volume rocker stays on the left, the SIM card tray on right and the power button has an integrated fingerprint sensor on the right as well.

The new change is a color option. The phone has been leaked in a new purple colour, which confirms Realms 8S will launch in a special Purple colour option.

The device will be available in 6GB and 8GB RAM options with an additional 5GB virtual RAM.

The company will roll out the new virtual RAM feature with Realme 8S where the device UI will use a portion of the internal storage for seamless performance and multitasking. Realme 8S will have 128GB or 256GB storage options running on Android 11 OS with Realme UI 2.0 custom skin on top.

Coming to Realme 8S cameras, the device will have a triple camera setup at the back featuring a 64MP primary sensor with an ultrawide lens and a macro sensor. The device is said to come with a 16MP snapper upfront. Realme 8S will be backedy a 5,000mAh battery with 33W Dart fast-charging support. Realme 8S will have a USB Type-C port for charging along with a 3.5mm audio jack.

Finally, Realme 8i specifications appeared on TENAA back in April revealing a few key specs. The upcoming Realme phone is said to feature an AMOLED display and with 5G connectivity support expected. Realme 8i is expected to come with an in-display fingerprint sensor and a 4,400mAh battery. It’s still not known whether both the upcoming Realme 8 series phones will support 5G or not. Realme has been focusing on budget 5G phones in India, so Realme 8i may also have 5G support.