Xiaomi’s Mi series of flagship killers may have put the company on the map, but the brand’s Redmi Note lineup laid the grassroots for the tech giant’s meteoric rise in the country. As such, Xiaomi enjoys the biggest share of the smartphone market in India and if the reviews for the brand’s recently launched Redmi Note 10 range of phones are anything to go by, then the latest entrants would’ve only added to the company’s accolades.

Well, to capitalise on the momentum, Xiaomi recently unveiled yet another smartphone in the Redmi Note 10 lineup dubbed the Redmi Note 10S. Understandably, there’s a lot of confusion surrounding the latest entrant and how it slots itself amidst the rest of the devices in the lineup so in this review, let’s take a closer look at everything the phone brings to the table.

The Redmi Note 10S doesn’t quite hit the nail on the head and is let down by its poor performance. Add to that the Note 10 Pro’s aggressive pricing and there’s very little reason to upgrade to Redmi’s latest mid-ranger. 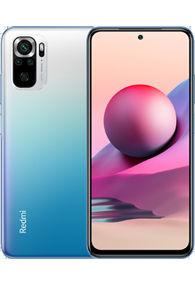 The Redmi Note 10S sits between the Redmi Note 10 (review), and the Redmi Note 10 Pro, and consequently, the handset draws a lot of parallels to the aforementioned devices. Understandably, the Redmi Note 10S borrows a page from the Redmi Note 10 in the design department and can also be seen toting a plastic back with a classy matte finish that keeps smudges at bay. The smartphone is available in three colours, though buyers looking to make a splash will want to pick up the Ocean Blue hue, which offers a stunning gradient finish towards the back. Coupled with the chrome accents on the camera module, the Redmi Note 10S is among the better-looking phones under Rs 15K.

Now, while the Note 10S doesn’t feel as premium to hold as the Note 10 Pro (which ships with a glass back), the handset offers much better ergonomics, thanks to its featherlight weight of just 178 grams. Furthermore, seeing how plastic is more durable than glass, the smartphone’s build will undoubtedly stand the test of time too. Consequently, I didn’t feel pressured into babying the Note 10S during my time with it and I can see a lot of buyers using the phone without a case too.

As for I/O, the Note 10S ships with a USB Type-C port at the bottom with USB 2.0 spec. The handset comes with a dual-SIM tray with a dedicated microSD card slot, thereby allowing buyers to expand the storage of their phones. In terms of audio, the smartphone comes equipped with a hi-res certified 3.5mm jack, which paired nicely with my 1More Quad Driver IEMs – I didn’t hear any static when using the earphones and the audio quality was to my liking as well. You’ll also get dual-stereo speakers with the phone, which get adequately loud albeit sound tiny. Regardless, the Note 10S’ audio setup should suffice for watching movies or playing games on the go.

Now, much like the rest of the phones in the Note 10 lineup, the Note 10S also comes equipped with a side-mounted fingerprint sensor which worked flawlessly during my testing. I was also in awe of the handset’s face unlock tech which is among the quickest under Rs 20K. Moving on, let’s talk about the handset’s display and here, the Note 10S features the same panel as seen on the Redmi Note 10. To that note, the smartphone ships with a 6.43-inch, FHD+ AMOLED screen that refreshes at 60Hz. Going by the specs, you’d be wise to assume that the screen offers ample contrast and punchy colours. What’s more, the panel exhibits excellent peak brightness levels and you shouldn’t find any issues using the phone under the sun either. If anything, I would’ve liked to see a high-refresh rate display here, akin to the one on the Redmi Note 10 Pro. But, I digress.

Do note that the display offers a satisfactory touch response rate and the screen did a good job of picking up on any and all on-screen gestures. I should also point out that the bezels surrounding the panel are quite slim and the punch-hole notch didn’t distract me whilst watching movies on the phone either. Speaking of which, the smartphone does come with support for WideVine L1 certification and consequently, you will be able to leverage HD streams from OTT services on the Redmi Note 10S.

Camera-wise, the Redmi Note 10S borrows the Redmi Note 10 Pro’s camera stack and offers more or less the same setup with a few tweaks. The handset still ships with a 64MP main sensor and an 8MP ultra-wide angle lens, but switches the 5MP Tele-Macro shooter on the Note 10 Pro in favour of a 2MP macro sensor. Lastly, you’ll get another 2MP depth sensor towards the back, with a 13MP selfie shooter present upfront.

To cut a long story short, the Redmi Note 10S is a capable pocket shooter and the device clicks appealing images across a variety of different scenarios. Photos shot with the phone during the day exhibit ample details with good dynamic range, and the sensor’s colour science sways in the favour of authentic tones too. What’s more, unlike the high-res shots from some other competing handsets, the 64MP photos from the Redmi Note 10S don’t just elevate the details in the scene, but the smartphone also keeps the exposure and white balance under check. The same goes for the lowlight images too and while I did notice instances of over-sharpness at a closer crop, the sensor did a good job of squeezing out the details from the shadows and somewhat mitigating the noise in the composition.The wide-angle images look good too, with the 8MP sensor offering a wider canvas for landscape photography and retaining a good amount of corner details in the scene as well. Unfortunately, the output from the 2MP macro sensor is nothing to write home about – the images lacked sharpness and the sensor would take its sweet time to focus on the subject as well.

As for selfies, the Redmi Note 10S’ 13MP shooter does a passable job of clicking appealing selfies under the sun. My one qualm with the sensor is that the images appear beautified even after I’d turned off all the skin-softening features. Lastly, if you’re planning to shoot a lot of videos with your phone, then you should know that the Redmi Note 10S can shoot 1080p clips in 30 and 60fps, and 4K footage in 30fps as well. The quality of the footage was fine for the most part, though the software-based stabilisation could’ve been better.

Unlike the rest of the devices in the Note 10 range, the Note 10S is backed by a MediaTek chip. In particular, the device features the Taiwanese tech giant’s gaming-oriented Helio G95 processor which works alongside either 6GB or 8GBof LPDDR4X memory and UFS 2.2 storage. Unfortunately, while the specs of the handset are on par with the competition, the smartphone’s performance leaves a bit to be desired. While the handset performed reasonably well in day-to-day tasks such as browsing the web or using various social media apps, I noticed that the app launch times were a bit on the higher side.

Funnily enough, I cannot substantiate the same by means of synthetic benchmarks as here, the smartphone outputted admirable results which were on par with the SD732G toting Redmi Note 10 Pro, and the Redmi Note 10 Pro Max (review). However, when subjecting the handset’s Helio G95 SoC to sustained loads, say, playing Call of Duty Mobile, the processor throttled in a jiffy. In fact, while the title can, in theory, run with the graphics preset set to High and at Max frame rate settings on the Helio G95 equipped Redmi Note 10S, in actuality, the game felt – for the lack of a better word – unplayable. I even dropped the settings to the lowest graphics preset but to no avail – the in-game frame rate still felt quite choppy.

I had a similar experience in other resource-hungry titles too, mind you. Be it Genshin Impact or Fifa Mobile, the Redmi Note 10S’ SoC left me wanting more horsepower. The same was also evident in the CPU Throttle test wherein, the SoC struggled to sustain its peak frequency for extended periods. So if you were buying a phone to make the most of the upcoming Battlegrounds game by Krafton, or pretty much any other graphically-intensive title for that matter, then you might want to look elsewhere.

Thankfully, the Redmi Note 10S does right some wrongs with MIUI v12.5, which feels a tad more polished than MIUI v12. In particular, animations and transitions felt more responsive and lively, and although the skin still ships with a ton of bloatware, you can even uninstall some system apps this time around. Unfortunately, the custom skin still doesn’t support gesture-based navigation on third-party launchers. Furthermore, you can’t install a custom icon pack on the default launcher either. And, while the handset didn’t clutter my notifications with ads, I did get a handful of app recommendations from GetApps, the brand’s proprietary app store. All things considered, MIUI 12.5 is a step in the right direction albeit the custom skin, on the whole, still has ways to go before it can rival the experience offered by Samsung’s OneUI or OnePlus’ OxygenOS.

In the battery department, the Redmi Note 10S ships with a 5,020mAh cell which comfortably saw me through the end of a heavy workday involving lots of phone calls, instant messaging on various platforms, and some gaming. The icing on the cake is that the handset ships with a 33W brick in the box which managed to charge the device completely in just an hour and twenty minutes.

Xiaomi has thrived in the affordable segment by offering enticing devices that have swept the competition with their specs and aggressive pricing. Unfortunately, the company’s very own Redmi Note 10 Pro casts a shadow over the Redmi Note 10S and offers a superior 120Hz display, a more premium glass-back chassis, and a better camera stack, all for just Rs 1,000 more. What’s more, the Redmi Note 10S’ Helio G95 SoC leaves a bit to be desired and buyers opting for the Pro variant will undoubtedly benefit with more consistent performance too.

Consequently, while the Note 10S isn’t a bad phone per se, it doesn’t quite make a mark amidst the current crop of affordable handsets. So, if you were eying the Note 10S, I’d recommend you save up Rs 1000 more and opt for the Pro model instead. With that said, provided you don’t have a flexible budget and are in a dire need of a new phone, then you may want to consider the POCO X3 (review) too, which puts forth a more well-rounded package.

Prev: PayTmMall: Upto 50% off on smartphones

Next: Samsung Galaxy M32 or Redmi Note 10S: which one should you buy?