The Galaxy S22 Ultra is Samsung's most recent flagship and it boasts several high-end features, but how durable is this phone which has a starting price of $1199? While rugged phones are ideal for those who want a device that can take a beating, most are usually lacking in features and a fair share of them pack either outdated or mediocre specifications.

Up until 2017, Samsung used to launch a rugged version of its flagship smartphones under the “Active” series. The Active line was limited to the U.S. market and was sold only by AT&T, save for the last Active phone, the Galaxy S8 Active, which was later sold by Sprint and T-Mobile. Although Samsung has stopped making Galaxy S Active smartphones, it has improved the quality of materials it uses for standard flagships. It also sells rugged protective cases that can provide added protection. 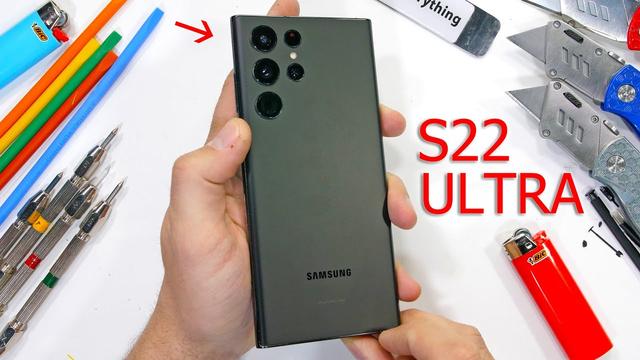 The Galaxy S22 Ultra is Samsung's most premium Galaxy S smartphone and it shows it in the materials used. The phone is covered in glass on both sides, and this is not just ordinary glass but Corning's new Gorilla Glass Victus+ which made its debut on the Galaxy S22 series. It also has a metal frame that is made from super-strong aluminum that Samsung has dubbed Armor Aluminum, in addition to having an IP68 water- and dust-resistance rating. To find out how durable the Galaxy S22 Ultra is, tech YouTuber Zach Nelson of the JerryRigEverything channel has put the phone through his infamous durability test.

From the tests, it is revealed that the Galaxy S22 Ultra not only has a metal frame but metal buttons too. While the frame shouldn't easily get deep scratches as shown in the video, Samsung has applied a plastic wrap around it that can prevent small scratches for those who decide not to throw on a case. The top of the S Pen is also made from metal but the shaft is plastic and can snap in two if the right amount of pressure is applied, such as a person accidentally sitting on it. However, like the phone, the stylus is also water-resistant.

The video also shows that Gorilla Glass Victus+ on the Samsung Galaxy S22 Ultra scratches at the same level as Gorilla Glass Victus but there isn't a drop test to show if it is better in terms of surviving drops. The final test is the bend test and the phone passes with flying colors as it doesn't snap in half nor does the glass on both sides get cracked. TheSamsung Galaxy S22 Ultra is not a rugged phone, but it isn't a fragile one either. Nevertheless, it is still advisable for owners to invest in a case considering the glass build.

NEXT: How To Use Hyperlapse With Night Mode On Samsung Smartphones