Being one of the most popular mobile games out there, PUBG Mobile continues to attract a wide audience, which also includes a number of cheaters or hackers. The game developers have been pretty active and vocal regarding the use of cheats and earlier this year started publishing weekly reports. According to its latest anti-cheat report from last week (9th October to 15th October) over 2,872,644 accounts were permanently banned from PUBG Mobile.

Now as per our experience, it can get very frustrating to deal with hackers on PUBG Mobile. The best way to tackle such players is to report them via the in-game anti-cheat system. There is also a video review system to hunt down cheaters. But before you do that, it’s best to understand how these hacks and cheats actually work. Here we have some of the most hacks and cheats used by players in PUBG Mobile.

The purpose of this article is to spread awareness around the various types of hacks that are used in games like PUBG Mobile. We do not encourage the use of such hacks as it can lead to a permanent suspension of your account. Moreover, the use of cheats and hacks is just an unfair advantage that you gain to win a game, what’s the fun in that? Try using these PUBG Mobile tips instead.

This is one of the most common cheats used in almost every shooter game as it is easy to implement. Using this hack, players get the advantage of spotting their enemies even when they are not in the line of sight. One can easily spot the location of every single player through walls, hence the name wallhack. Traditionally this cheat makes the walls transparent, but the most common wallhacks on PUBG Mobile highlight an opponent player in a bright green color. The hacker can easily detect his/her opponents and attack strategically. Recently, PUBG Mobile spotted a new way that hackers were using to implement wallhacks. Apparently they would team up and get killed in a match on purpose. Then using the spectator option, the hacker would help his/her teammate to get an unfair advantage. PUBG Mobile has already introduced some changes to prevent this from happening. 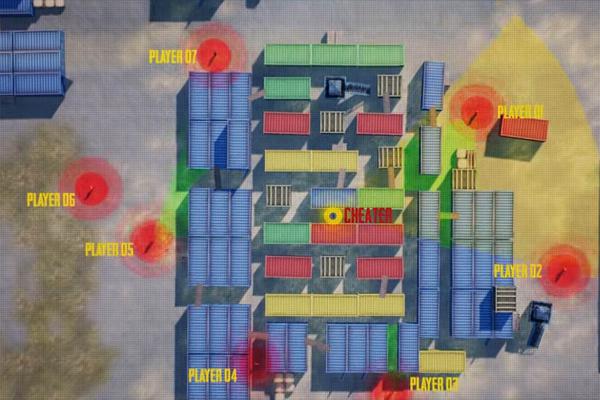 ESP or Extra Sensory Perception is another popular hack used to get an unfair advantage on PUBG Mobile. You can call this a step beyond wallhack wherein apart from the location of the opponents, a hacker can get additional information. The ESP system basically injects code into the game client that monitors the game data in your device memory. It is one of the most advanced hacking techniques that offers a variety of information on your opponents such as name, health, distance, weapons used, and much more. It is also called the radar hack as one of its most popular features is the ability to pinpoint items and players using guided radar-like lines. This is one of the few hacks that can be difficult to spot.

These are the best PUBG Mobile emulators right now

This is pretty straightforward and just like wallhack, it is seen on multiple shooter games. Using this hack, a player gains 100% accuracy when fighting against opponents. Certain aimbot hacks don’t even need the hacker to aim at the opponent or be in close proximity. It can redirect your shots right onto the head of your opponents resulting in effortless kills. This hack is quite easy to detect though. If an opponent manages to inflict damage while you are hiding with complete protection all around, there is a high chance that he or she is using an aimbot hack.

Yet another hack that is easy to spot, speed hacks are used to move fast within the game. Notably, the hack isn’t really fool-proof and comes with certain drawbacks. One can easily identify a player who is using a speed hack by their sheer speed and it isn’t entirely difficult to kill them. The added speed can sometimes be difficult to control and hackers can end up in a tight situation especially while driving vehicles. The speed hack can offer an unfair advantage during short-range battles and moving around the map to gather loot at a quick pace.

The jump hack lets users leap into the air allowing them to get a bird-eye view of the map. It is also called as the anti-gravity cheat as the effect is similar to what one would experience when there is less or zero gravity. Just like the speed hack, this can be used while driving a vehicle. While this hack is used to spot and hunt enemies from above, it is very blatant and can easily be spotted.

If you’re in India, due to the recent ban around Chinese publishers, PUBG Mobile and PUBG Mobile Lite is currently banned in the country. The government has advised not to download either of the games.

PC building enthusiast currently exploring the gaming industry. My love for tech began at an early age and I also have a keen interest in photography, music, PUBG Mobile, automobiles and a knack for keeping things clean.Email: [email protected]