Home > HUAWEI > www.androidpolice.com Leaked Samsung Galaxy A53 specs show one of last year's best mid-rangers is getting even better

Samsung always puts its very best tech into the flagship Galaxy S and Z lineups, but those can make for some pretty expensive offerings. For everyone else, the Galaxy A series helps strike a nice balance between powerful components and affordable price tags. Lately we've been following progress towards the upcoming Galaxy A53 5G, with plenty of renders and spec leaks to whet our appetite. Today we're picking up even more detail, as the latest leak goes in-depth into what kind of hardware we might expect from Samsung.

According to new info shared by Sudhanshu Ambhore on Twitter, the Galaxy A53 will be powered by the Exynos 1280 CPU, and should come with up to 6GB of RAM and 128GB of storage. Previous reports identified the processor as Samsung's Exynos 1200 chipset — that's not necessarily a conflict here, and the 1280 sure sounds like it could be a variant (neither chip has been officially announced as of yet). 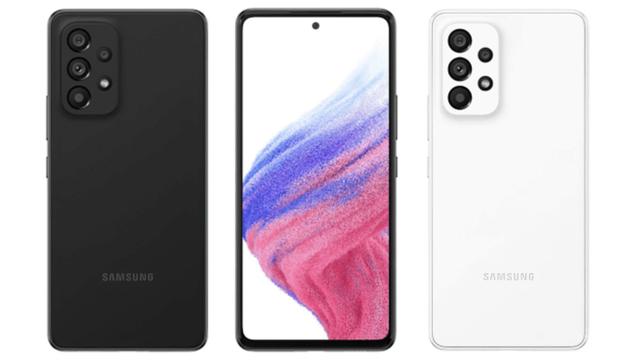 This new source also agrees with those earlier accounts on some other specs — the A53 sounds like it's going to get a 6.5-inch 1080p AMOLED display with a 120Hz refresh rate. Just like we've learned to expect from Samsung, look for a hole-punch front camera, which should be 32MP. The rear camera setup is tipped to consist of a a 64MP main sensor with support for OIS, complemented by a 12MP ultra-wide, a 5MP macro, and a 5MP depth sensor. The phone should also support video recording at up to 4K@60fps, or a super high-res 8K@24fps. Samsung's likely to ship the A53 with One UI 4.1, and a 5,000 mAh battery (with 25W charging support) will keep it juiced through the day.

We also get a look at what we might get inside the box — or rather, what we won't. While we can expect standards like the SIM ejecting tool, documentation, and a USB-C cable, the in-box charger is reportedly gone, and we'll have to learn to live without it. Get shopping for a charging brick if you want to fast-charge this phone.

It sure feels like Samsung's Galaxy A53 5G should debut soon — and other than the loss of the charging adapter, it's sounding like another mighty fine mid-ranger.

It was initially only available in South Korea

Arol is a tech journalist and contributor at Android Police. He has also worked as a news/feature writer at XDA-Developers and Pixel Spot. Currently a Pharmacy student, Arol has had a soft spot for everything tech-related since he was a child. When not writing, you'll either find him nose-deep into his textbooks or playing video games. Reach him at arol@androidpolice.com.

Next: Realme GT 2 Pro to launch in India this month