In this article we look to the future of the most popular budget fitness band in the world. It is our take on what to expect from Xiaomi Mi Band 7, including possible technical specs and release date.

A few leaks have dropped which give a good hint as far as possible features. We combine this with our best guess as to functionality we could reasonably expect. We have updated this article a couple of times, and will continue to do so as and when new information becomes available.

The wearable is a popular choice for those looking for a budget fitness band. In just two weeks following its release, some 1 million Mi Band 6s were snapped up! And that’s before it was even made available for purchase internationally.

The biggest upgrade of Xiaomi Mi Band 6 over its predecessor comes in the form of a larger display. You could say that this has become somewhat of a tradition. The size of the screen has been bumped up for several years in a row now.

In 2021 we got a 1.56 inch AMOLED that contours to the shape of the band, up from 1.1 inches before. That’s quite a sizeable increase. The company says this type of display gives users 50% more screen space than on the predecessor device.

Most impressively, Xiaomi has managed to achieve this without increasing the size of the device. There is a difference but it’s marginal. The current version measures 47.4 x 18.6 x 12.7mm which is only slightly larger and thicker than generation 5.

Which means the increase in size has been achieved by shrinking the bezel around the edges. In fact you could say there’s almost no bezel now. Well, there is but it is small.

The quality of the AMOLED on Mi Band 6 is pretty high (326 ppi, 152 x 486 pixels) so this might also stay the same on Mi Band 7. But an area of improvement could be screen protection. All the Xiaomi Mi Bands so far are succeptible to scratching. That could easily be changed with a Gorilla Glass display or similar.

A larger display, once again

If you think 2022 might a year where the display finally stays the same size, think again. Xiaomi looks to be going down the route of Huawei and Honor. Their latest fitness bands come with an even larger screen (measuring a whopping 1.64 inches) than the one that can be found on Mi Band 6. This has been achieved by making the middle part of the display wider than the strap.

Might Xiaomi opt for this route? It is looking incresibly possible. In fact, a recent patent in China would suggest this. It shows a Xiaomi “smart bracelet” that looks very much along the lines of the current generation. The main difference is the display which extends beyond the width of the strap.

If this ends up being the new design, it will further burn the line between fitness bands and smartwatches a bit too much. Xiaomi has a loyal following and is is questionable whether its customers will be happy with such a radical change in design.

Adding credence to this is info that comes from Magical Unicorn (via Logger). The source has a decent track-record of leaking info of unreleased devices.

This reveals Mi Band 7 is being developed under the codename “L66”. Two variants are in the works that go by model numbers M2129B1 and M2130B1. They’ve dug for information in the Zepp app software code and found that Xiaomi Mi Band 7 will come with display pixel resolution of 192 x 490 pixels. That’s just as wide as Honor Band 6, but taller.

They’ve even managed to dig up some pics of watch faces. Once again, there will be a rich selection.

Shown below are a few always-on options. Yes, Xiaomi Mi Band 7 looks like it will have an AOD option.

The all-screen front on generation 6 means Xiaomi has had to do away with the physical button below the display. So you now need to use the touchscreen to navigate the screen. This includes swipping, tapping and tap holding. That’s all well and good but a physical button can be useful in wet conditions, while you are wearing gloves, etc. 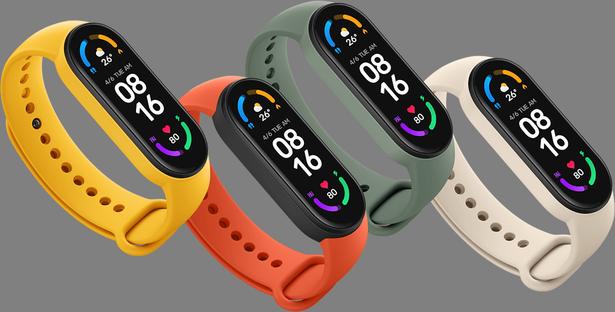 Might we see a return of some sort of physical button on gen 7? We wouldn’t rule it out. A good route might be something akin to the capacitive button which can be found on some Fitbit fitness bands and smartwatches.

Any other hardware changes?

Battery life on the current version is an excellent two weeks on a single charge. This has remained relatively unchanged in the last few generations although the battery life does take a hit with adavanced features. Awesome battery life is one of the main attractions of the Mi Band and we expect this to remain to be the case in the future.

Having said that, the more power-hungry specs of Mi Band 7 will put a strain on the battery. Hence the above leak points to the introduction of Power modes. Switch to the Battery saver mode and the band only records steps and basic information. But it will keep going for longer.

The water resistance is also quite good at 5 ATM on the current version. That means you can safely swim with it. Expect more of this on the next generation.

Apart from design tweaks, Mi Band 6 comes with several other upgrades over its predecessor. The most important one is something that was expected to land last year – an SpO2 sensor. This allows you to take blood oxygen measurements on demand.

The current generation also brings more sports modes over its predecessor. Now there are 30, and 6 of these are with auto-recognition.

Other than there was nothing really new this year. Many had expected Alexa functionality but this was nowhere to be seen.

The Mi Band ticks most boxes for those after a basic fitness tracker that won’t break the bank. You won’t find the bells and whistles of a Garmin or Fitbit but you do get a lot.

This includes the steps, distance, calories, stress, heart rate, blood oxygen, sleep, female health tracking, activity and more. Expect generation 7 to come with all this and more. Of course, the quality of statistics should be improved as next device will come with the latest tech on offer and improved algorithms.

Xiaomi has been improving the accuracy and breadth of its stats. For example Gen 6 brings sleep breathing quality through the SpO2 sensor. Heart rate monitoring has benefited from improvements in recent years but this still has room for improvement, particularly during high intensity exercise. Improvements in the accuracy of sleep tracking would also be welcome.

An altimer remains the one obvious omission. This is used to calculate floors climbed. We hope to finally see this on the 2022 iteration.

Another possibility could be built-in GPS. The current generation relies on your smartphone’s sattelite signal for this. So if you are doing a run outside and want detailed maps of your exercise and accurate stats, you need to have your smartphone with you – which is not ideal.

One route Xiaomi could go down is to introduce a version with GPS and a version without. Not everyone needs built-in GPS and there’s no reason for them to be paying for tech they won’t use.

The above-mentioned leak from Magical Unicorn does mention references in the code that refer to built-in GPS (including BDS, Galileo, Glonass support). Perhaps the two versions of the fitness band that are mentioned are one with and one without built-in GPS.

More improvements should come in the form of smart functions.Alexa compatibility was widely expected this year but it didn’t make the cut. Huami, which is the manufacturer of Xiaomi Mi Bands, has had this on its fitness bands for over a year now. There’s no reason for Xiaomi not to introduce this. There is a voice assistant currently on Mi Band 6 but that is only for the China region.

Another feature that is reserved for the local market arepayments-on-the go. NFC on Mi Bands exists, but only on the Chinese iteration. It high time Xiaomi brings this across the border?

Finally, Mi Band 6 allows you to control music from a connected smartphone. Built in storage for music would be nice, albeit unlikely.

Going back, once again, to the Magical Unicorn leaks. And this points to a few smart functions. One of these is aSmart Alarm feature. This was available with the first generation Mi Band but has sadly been dropped on the subsequent generations. Well, it looks like this may make a return on Mi Band 7.

The function wakes you up when you are in the light stage of sleep within a 30 minute window before the set alarm. It simulates natural wake-up which should hopefully have you up feeling refreshed as you have not been woken up from deep sleep.

The leak also mentions aPasscode feature. It made a brief appearance on Mi Band 4 but not on any other bands. It allows you to passcode protect your fitness tracker.

To summarise, we are expecting Mi Band 7 to come with a larger display with an always-on option, built-in GPS (maybe), features such as smart wake, passcode, Power Saving Battery Mode and more.

Xiaomi has been fairly regular at releasing subsequent generations of the Mi Band each year. Since 2016 these were unveiled in May or June, 2021 being the exception.

The tech giant surprised us last year with a Spring release date. So it seems the gap between subsequent generations is narrowing. This means Mi Band 7 could land any time now – possibly in May or June if Xiaomi reverts to the later release date.

As far as price, this has been creeping up. The current generation will set you back around $60 (check current price on Amazon). This price point is probably the top end of what you would want to pay for a budget fitness tracker. This is why we don’t really see Xiaomi bumping up the price any further.

Except, of course, if there’s an iteration with built-in GPS. If that one pans out expect it to retal around $30 more than the regular variant.

Next: Xiaomi 11 Lite NE 5G is selling for Rs 21,499 during Black Friday sale but you should buy this Xiaomi phone instead