The Asus ROG Phone 5 Ultimate was launched as part of the company’s gaming series ROG Phone 5 earlier this year in India. But unlike the vanilla model, this limited edition phone wasn’t made available for purchase in the country. Now, fast forward to today, Asus is sharing the price and availability details of its most premium handset of the series.

As per the official details, the ROG Phone 5 Ultimate will go on sale on December 26 at 12 pm via Flipkart in the country. The price of the smartphone with Snapdragon 888 5G mobile platform and the elephantine 18GB RAM is set for Rs 79,999.

The ROG Phone 5 Ultimate is identical to ROG Phone 5 Pro with a few cosmetic changes. It comes in a special frosted glass and Storm White color scheme and features a monochrome “PMOLED ROG Vision” display on the back.

Also, the 'Ultimate' limited edition model gets a whopping 18GB RAM compared to the Pro model. Furthermore, it has exclusive packaging, which carries a bunch of ROG merchandise.

Alongside the phone, Asus is also bringing a bunch of accessories to India including, the AeroActive Cooler 5 for Rs 2,999, ROG Kunai Gamepad for Rs 9,999, and ROG Cetra II Core Headset for Rs 3,999. All three accessories will go on sale on Flipkart. 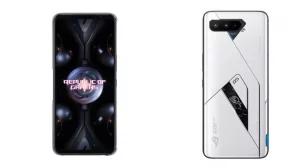 The Asus ROG Phone 5 Pro is also listed on Flipkart for Rs. 70,000, for Rs 10,000 less than the Ultimate’s price. However, the availability details are unknown.

Apart from these changes, the ROG Phone 5 Ultimate shares the same specifications, which include a 144Hz AMOLED display, Snapdragon 888 SoC. The phone also comes with AirTrigger 5, dual front-firing speakers, multi-antenna Wi-Fi, and so on.

Asus ROG Phone 5 Ultimate is touted as the world’s first 18GB LPDDR5 RAM gaming phone. It comes with Snapdragon 888 5G processor and a massive 512GB UFS 3.1 storage. The phone features a 6.78-inch Full HD Plus AMOLED display with up to a 144Hz refresh rate. It supports 800 nits peak brightness and HDR10 Plus support. It has dual 3,000mAh batteries in MMT technology-based design that supports 65W fast-charging, though the adapter in the box is 30W.

The Asus ROG Phone 5 Ultimate has a 64MP f/1.8 Sony IMX686 main sensor, capable of 8K and 4K HDR video-recording capabilities. The secondary sensors include a 13MP ultra-wide camera and a 5MP macro camera. On the front, the phone comes with a 24MP quad-bayer sensor for selfies and HD video calls.