It would be so much easier if we could build a life-size passenger aircraft the same as we build a hobby model kit. With some strong glue, assemble the two halves of the fuselage together, join the two wings and the empennage and job done! Unfortunately, things are never that easy in the real world, but one company that is applying some real joined-up thinking on the final assembly line is Broetje-Automation.

As a leader in the field of robotic solutions, Broetje-Automation’s mobile, highly flexible production systems and advanced digital solutions are utilised to increase flexibility in the manufacture of highly engineered end products. The company’s product portfolio ranges from individual machines to entire production lines and software solutions, including flexible and digitally sophisticated products - such as its Multi Panel Assembly Cells (MPAC), and multiple robotic applications - from very light robots working collaboratively with humans up to its PowerRACe heavy-duty, precise robot system.

The Covid pandemic has been an incredible turbulent time for the entire industry. While the downturns following travel restrictions were a big challenge for the industry, nevertheless it has been a time for innovation for our company as well. During the past two years we have seen a major technological shift in the production and assembly of aircraft. The post-pandemic production will be different than today. It will be smart, flexible and digitally interconnected and we thrive to be a leader in equipping this Factory of the Future.

We have therefore brought new systems to the markets that reflect this mega-trend. From machine-integrated digitalisation, such as the digital twin to the flexible shopfloor with mobile robots and mobile machines such as the mobile PowerRACe robotic platform as well as completely new assembly techniques, like automated robotic sealing or cobot systems doing the first steps in riveting, we see a real change thanks to new technologies that are available now.

As a company, we have also increased our global footprint as we see proximity to the customer becoming more and more important future-facing trends of the regionalisation of the supply chains. With our engineering, design, manufacturing and assembly capabilities in the US as well as in China, France and the UK, we now are closer to our customers and have more decentralised production capabilities to serve the customer’s needs.

Q) Why is there a need to adapt to the world of digitalisation and what kinds of technologies are you investing to help the operators do their jobs more efficiently?

We see digitalisation entering the shopfloor across the board. We’ve used digitalisation to simulate automated equipment and its interaction towards the workpiece for many years. Nowadays, this virtual twin is also the basis to upfront training and to secure critical parts of the start-up and qualification phases during the project.

One example is the ‘virtual acceptance’ that we have implemented with some of our major customers. For all of us the pandemic made it hard to realise face-to-face meetings. With the help of the existing digital twin - combined with live-streaming and other new technologies - we were able to perform not only design reviews but the entire acceptance process virtually now. Normally they would have been in-house at our premises in Northern Germany. This will be something we expect to last beyond the current situation, as it saves travelling time and cost and even is a contribution to a more sustainable collaboration within industrial projects.

On the hardware side we’ve made big advances in assisting the workers with light automation and robotics. Collaborative robots have been around for a while, e.g., to provide handling support. We have transformed them into a real robotic ‘colleague’ that is capable of providing value-added work directly on the workpiece. Examples are our drilling and riveting cobots, as well as systems for sanding or sealing. Together with our customers we are gradually introducing this system to the shopfloor. The cobots are performing tasks that are unergonomic, highly repetitive or even have a negative influence on health and safety for the workers. By freeing the worker from manual work, the human being can make full use of his intelligence on the shopfloor by fulfilling the control and decision-making function. The worker becomes a machine operator and experiences a clear upgrading of his actions. This not only increases efficiency, but also enhances the value of human labour and makes the aerospace production shopfloor and more attractive working environment.

Q) How can your customers’ production lines be transformed through the introduction of new technology?

We see increasingly more mobile and flexible equipment within the production lines. Therefore we have introduced the ‘Broetje-Automation Universal Carrier System’. This is a highly adaptable and flexible system to transform our equipment with additional mobile robot functionality. Consequently, it’s much more than what is already known as autonomous guided vehicles (AGVs). We integrate the mobile platforms into our machines to create mobile work cells. 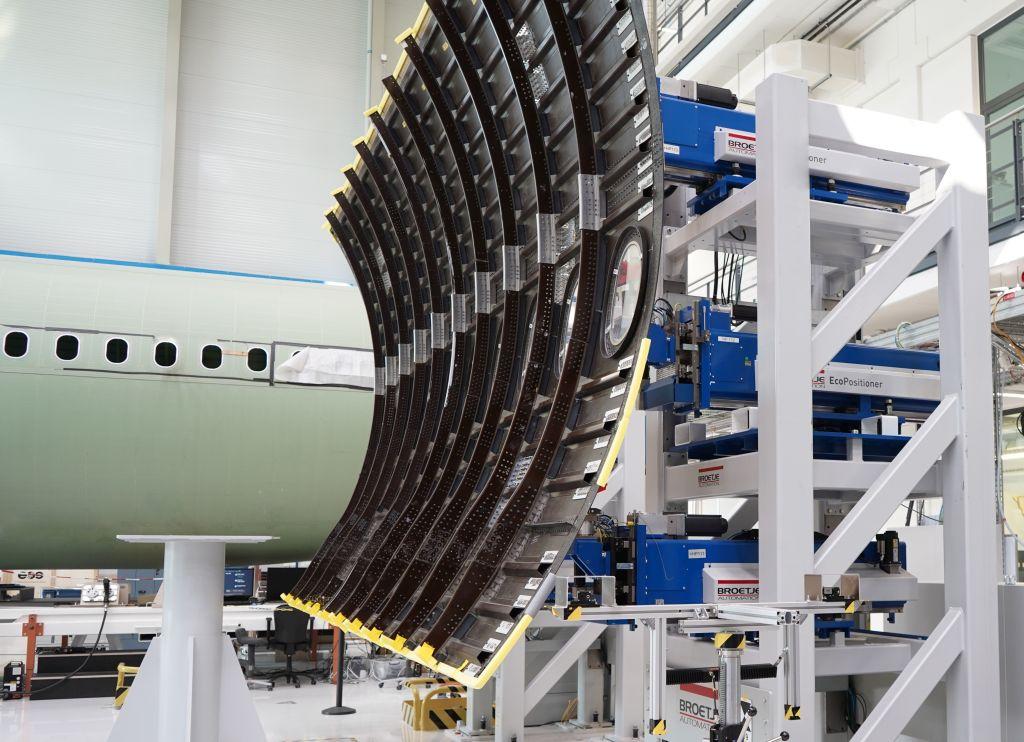 One good example is the mobile Power Robot Assembly Cell (PowerRACe) platform that was specially developed for the aerospace industry. It brings significantly more power to the component and it’s more accurate than any system on the market. With the integration on a mobile, self-driven and autonomously navigating platform, it’s extremely flexible to use, while on the other hand, you can use the identical proven methods for programming and operation that are used in conventional production today.

Q) What specific changes are your customers on the project looking to drive forward?

By using mobile assembly systems our customers are achieving not only higher levels of automation, they also are more rate flexible and can utilise the system for many different applications. Traditional stationary fastening systems very often have been designed for one specific part. With the introduction of a more flexible robotic system, you can add a much higher variety of parts that can be assembled by one system. Therefore, assembly automation becomes interesting for lower production rates and smaller aircraft programmes that in the past had no business case with a high level of automation.

Q) How much easier can the shopfloor now switch from one short batch product to another with minimal effort and cost in the process?

With the growing uncertainties that came with the Covid pandemic, rate flexibility counts for investment in capital goods, such as the production equipment. This provides very high added value for our customers.

But this is just the beginning. Today, autonomous mobile robots are mainly used to transport parts or tools to an assembly system. With our new universal carrier system technology, we’re able to move the entire production and assembly equipment while keeping the highest quality and accuracy standards. This unleashes your entire factory as you bring the production system to a new level of flexibility.

Our vision is to provide what we call ‘clean floor production’ that offers the flexibility to adjust the production to the actual need, rather than having to anticipate the production volume of a whole programme lifecycle. We believe this is the future for automated production of large and complex assemblies.

Q) What kind of change in mindset has been required to get the right systems and communication in place, and has honest feedback been vital in this process?

The crucial factor for innovation on the shopfloor is a close collaboration with our customers across technological domains. The digital system has to be in-line with the physical system and the process development in order to unleash its full potential. In the same way, our organisation is closely engaged with our customer teams in order to ensure we have the best possible system in place. Without honest feedback and open communication on both sides, this would be impossible.

Q) Going forward, what future innovations are planned that will extend the use of technologies throughout the production facility?

We will certainly see humans and robots working hand-in-hand on the shopfloor. We do not expect to take the human out of the equation, we rather see the human becoming the centre of an interconnected infrastructure. In the factory of the future, automation - thanks to increased flexibility and smarter systems - will follow human needs rather than forcing humans to act in the repetitive and unergonomic way of today’s shopfloor practises. This is a true paradigm shift towards humanistic and still highly automated aircraft production.

Another dimension of digitalisation is driven by fact that the industry is already facing demographic issues. Experienced people have left the companies as a result of restructuring, which means a lot of knowledge in manufacturing has gone or needs to be covered by less people.

This is why we’re working to enhance the level of autonomous operation in our machines. Firstly, we increase the amount of machine vision usage to secure automation. Secondly, we enhance the NC-tapes with additional information from the digital twin and previous production runs to allow the machine to decide without interaction. Using both, in the next step we can introduce multi-machine operation, allowing less operators to do more work without decreasing quality.

To support this approach we also use our Line Management System (LMS) to close the digital gap between different types and manufacturers of machines and the necessary remaining manual tasks. While MES systems have been around for some time, a middleware like our LMS helps to fully digitally integrate all the equipment on the shopfloor. All the LMS-gathered data - from the machines as well as from MES-level is then used to optimise processes and visualise them e.g., via different kinds of dashboards and reporting functions for operators, production managers, maintenance and all other personnel helping them to drive optimisation and resource efficient production.