Smartphone chargers are more powerful than ever and charging times are now so short that the battery in some phones will charge from 0% to 100% in less time than it takes to watch an episode ofRick and Morty. It’s all done using a special proprietary charging block and cable, which come in the box with your phone.

That is, of course, unless you buy a Samsung or Apple phone. In that case, the charger isn’t in the box at all, a move that both companies say is beneficial to the environment. Does this mean the firms that include chargers don’t care about the environment, or that you — as a buyer who wants to enjoy ultrafast charging speeds — don’t either?

Samsung has a section on its website explaining why it has removed the charging block and earphones from the box for many devices, starting with the Galaxy S21 series. The latest Galaxy S22 series does not come with a charging block or earphones, and neither do the most recent A-Series phones, and there are rumors that Samsung’s cheapest M Series phones won’t either.

Its reasoning is clear: “Samsung believes the removal of earphones and charger plugs from our in-box device packaging can help address the growing e-waste problem and unnecessary duplication of these items.”

Apple removed the charger and earphones from its boxes starting with the iPhone 12 in 2020,and has talked about the benefits of making the packaging smaller. During the iPhone 12’s launch event, it claimed 70% more products could fit on a shipping pallet, which combined with the removal of the accessories, would reduce carbon emissions by 2 million metric tons per year. It doesn’t include a charging block with the Apple Watch either.

The motivation for removing items from the box and slimming down the packaging revolves around environmental benefits, but it also saves companies money. The decision assisted Apple in not increasing the cost of the iPhone 12 and iPhone 12 Mini over the iPhone 11, despite adding new technology including 5G, according to Counterpoint Research.

If removing the charger from the box is better for the environment and a decent cost-saving measure, why aren’t all phone makers jumping on board? Outside of Apple and Samsung, many companies are using proprietary fast-charging systems as selling points to differentiate the latest hardware from the competition. After all, neither Apple nor Samsung come close to matching the charging speeds provided by Oppo, Realme, and Xiaomi. 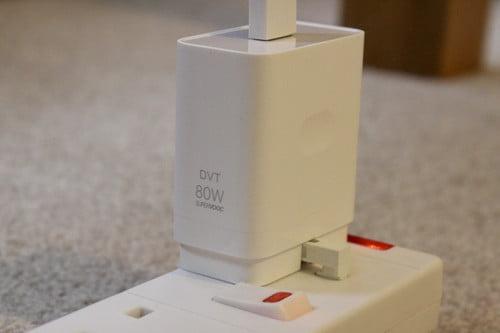 But is the benefit of a faster charging battery worth the environmental trade-off? Realme believes it’s a problem that needs looking at in a different way.

“We believe sustainability should not be defined by cancellation, but by providing new solutions with tech innovations, where we could eventually tackle the problem without sacrificing customers benefits,” the company told Digital Trends in an email.

Realme announced its 150-watt UltraDart Charge technology during Mobile World Congress 2022. It can charge a battery to 50% capacity in just five minutes, and will launch on the Realme GT Neo 3 in the near future. For it to work, you’ll need to use the supplied charging block and cable.

Madhev Sheth, the president of Realme’s International Business Group, explained further how the company is addressing sustainability in other areas.

“Although only a three-year-old upstart, we are moving steadily toward becoming an eco-friendly and sustainable tech player, aiming to make a positive impact on the environment through cutting carbon emissions and making sustainability more accessible to customers. We have been exploring various methods to pursue cleaner and more sustainable operations,” he told Digital Trends in an email.

“Realme is striving to cut carbon emissions from its GT series smartphones by 50% in five years via minimizing their full life-cycle carbon footprint through a process that goes from material selection, to design, manufacturing, packaging, use, and finally, to recycling. The GT 2 Pro is the first smartphone to use a biopolymer for its entire rear panel, reducing carbon emissions from its manufacturing by 35.5%. Compared with purely petroleum-based materials, this biopolymer creates two kilograms fewer carbon emissions for every kilogram made. The percentage of plastic used in the phone’s packaging has also been reduced from 21.7% to just 0.3%.”

Oppo, part of the same family as Realme, also packs fast chargers with its smartphones. The Find X5 Pro’s battery can be charged to 50% in 12 minutes, and fully charged in 30 minutes with the included SuperVOOC charger. In an email in answer to the same questions put to Realme, the company said:

“Oppo’s proprietary fast-charging technology is a key benefit of Find X5 Pro. This incredibly convenient, fast charging only works with a compatible charger, so Oppo strives to add value to customers by including the fast charger in the box. Through hardware and software optimization, Oppo has worked to increase the life span of Find X5 Pro’s battery to 1600 cycles. This is double the industry average, keeping the device battery healthy for longer, thereby reducing e-waste in other ways.”

Xiaomi has a 120W HyperCharge fast-charging system, which like the others here, also requires a proprietary block and cable. It’s astonishingly fast and will charge a 5,000mAh battery to full in about 15 minutes. In response to our questions, Xiaomi replied in an email:

“Xiaomi has both included and not included in-box chargers, and this is evaluated case by case. For example, with our recent global devices with 120W HyperCharge, we consider that most end users will not already own chargers of this standard, and therefore include them. We have also taken steps toward sustainability, such as continually reducing packaging plastic in our smartphone packaging since 2020.”

Fast chargers and you

A great deal has already been written about whether not packaging a charger is as environmentally beneficial as companies want you to think, but the general consensus is that yes, everything helps. However, experts also say there are other ways — some more significant than others — these firms can make a difference, and this is how Realme, Oppo, and Xiaomi appear to be justifying the continued inclusion of a charger.

Then there is the consideration that if you want to make the most out of faster charging speeds, you need a special charger regardless. Samsung charges $50 for its 45W charger needed for the highest speeds when powering up the Galaxy S22 Ultra, and Apple’s 67W charging block is $59. If you buy one of these just to get the fastest speeds the phone’s charging system offers, then has anything really been saved?

If you’re buying a new phone that comes with a proprietary fast charger, and are concerned about the impact it will have over time, aim to keep the device for longer than you may usually do, and carefully consider how you recycle your old device and associated peripherals.