In going afterMandiant,MNDT 0.09%Google parentAlphabetGOOG -1.66%is essentially betting on its ability to look small.

That’s no easy task for a company currently valued near $1.7 trillion. Especially since the $5.4 billion in cash Google is laying out for the cybersecurity provider counts as the company’s second-largest deal ever—after its $12.5 billion purchase of Motorola Mobility in 2011. The Mandiant transaction announced Tuesday is also more than double the size of Google’s Fitbit acquisition, which was announced in November of 2019 but took more than 14 months to close due to a high level of government scrutiny. 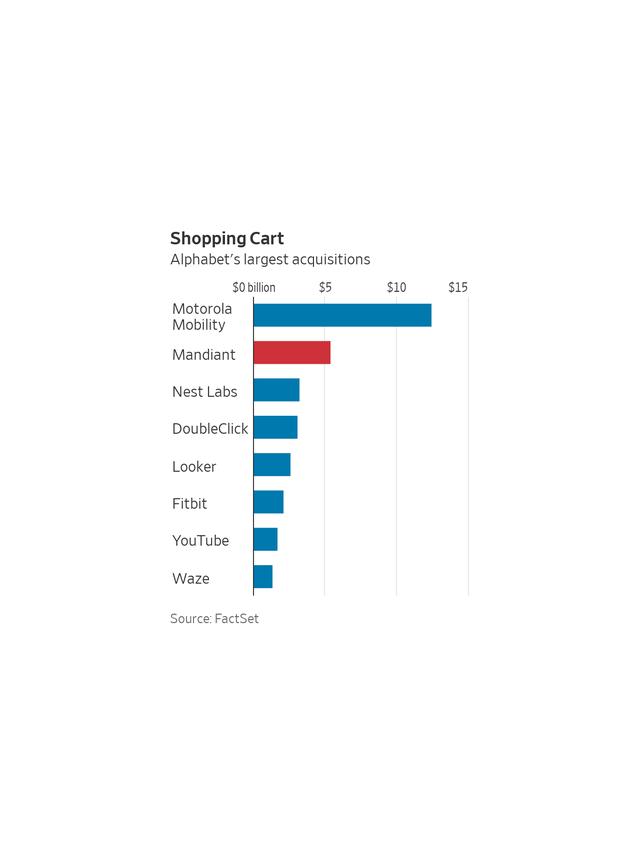 But in other ways, the Mandiant deal might just be small enough for Google to pull off without tripping the wire for regulatory opposition. The company once known as FireEye isn’t even close to being the largest player in cybersecurity; Mandiant’s projected revenue of $562 million this year doesn’t even rank it among the 25 largest companies on the NYSE FactSet Global Cyber Security Index.

And rather than boosting Google’s already-dominant advertising business, Mandiant is intended to beef up Google’s cloud operation, which has been growing fast but still generates less than one-tenth the annual revenue of the company’s advertising arm. Google also runs a distant third toAmazonAMZN -0.88%andMicrosoftMSFT -1.93%in the cloud-computing field and—unlike those other two—has yet to generate an operating profit from the business.

How much Mandiant will help Google close that gap is another question. The business would lift Google Cloud’s revenue for this year by about 2%, based on Wall Street’s current projections for the two. But Mandiant also expects to lose money this year, as the company has been working to restructure since selling its FireEye product business to McAfee last year. Mandiant said during its fourth-quarter call last month that it expects to achieve non-GAAP operating profitability next year. But Hamza Fodderwala of Morgan Stanley notes that Mandiant also has a lower mix of recurring revenue than many other cybersecurity players.

Still, buying Mandiant gives Google a highly visible position in cybersecurity. The company has made its name in incidence response—Mr. Fodderwala notes Mandiant has been hired to investigate “the majority of high-profile breaches over the last several years.” Russia’s invasion of Ukraine has significantly raised the visibility of the industry given the belief that the conflict will trigger a new cyberwar of hacking attacks across borders. Others seem to agree; Bloomberg reported last month that Microsoft was considering an offer for Mandiant as well. Google’s offer gives Mandiant shareholders a 53% premium to their unaffected price, which should make it worth their while. Time will tell if Google can make the deal worth the heat.

Prev: Pay freeze for SBLs and senior teachers and in England set to continue