Last month OPPO opened up the ColorOS 12 beta program for a bunch of new devices, including the OPPO F19 Pro, OPPO F17 Pro, and Reno 4. Now OPPO has detailed the next batch of phones scheduled to receive ColorOS 12 in March 2022.

OPPO plans to extend the latest version of its custom skin to many more phones this month. The company will kick off the ColorOS 12 beta program for the OPPO A53s 5G next week, followed by the Reno 4 Z 5G and Reno 7 Pro 5G. The beta program will allow users to try out an early version of ColorOS 12 based on Android 12 ahead of the public release. More details, including instructions for enrolling your device into the beta program, will be posted on OPPO Community forums, so keep an eye out. 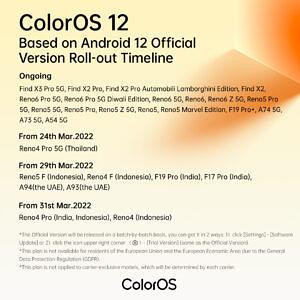 The following OPPO phones are scheduled to receive a beta version of ColorOS 12:

OPPO has also shared the list of phones that will receive a stable ColorOS 12 update in March. As per OPPO’s announcement, the stable update will start rolling out to select OPPO phones in India, Indonesia, Thailand, and the UAE from March 24 onwards.

Hands-on with ColorOS 12 based on Android 12: Here’s everything new in the latest update for OPPO smartphones

Next: OPPO to launch A76 on April 13 in Bangladeshi market