Apple has just announced a large number of new features in iOS 15, most of which will also land on iPad through iPadOS 15. Of course, the iPad also has some special new features. The first is the redesigned home screen, which now supports widgets, just like iOS 14 did on the iPhone. Now you can place widgets wherever you want on the home screen; previously, they were trapped in the column on the left side of the home page. There are new designs that take advantage of larger screen widgets, and the application library (which was also launched on the iPhone last year) will also land on the iPad. The app library is the central location for every app on the iPad, which means you can customize the home screen by hiding apps you don’t use frequently. In the end, it sounds like the home screen experience of the iPhone and iPad is now basically the same, which is definitely a good thing.

There are also some new multitasking tools that can be selected from the top of the iPad's screen. From here, you can select if you want to go into single app, Split View or Slideover multitasking. When you pick a mode, you'll get a view of your home screen to easily pick the app that you want to add to your view. Previously, you had to use the iPadOS dock to do this, which made new multitasking views with apps that weren't in your dock rather tricky. When you're in split view, you can swipe down from either side of the screen to go to the home page and select a new app for that space, as well. 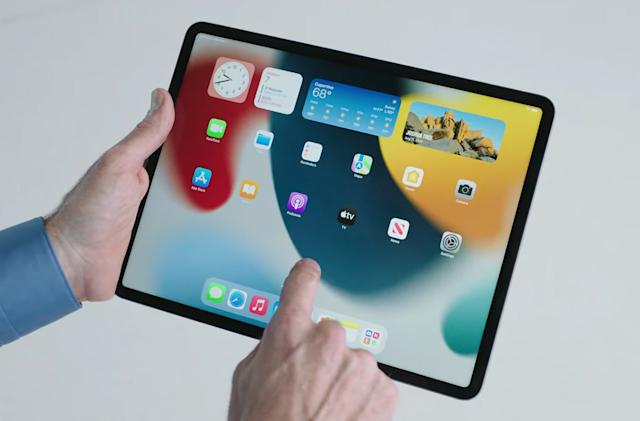 Notes is getting a significant update: shared notes. You can now @ message someone to bring them into the note, use hashtags to organize your thoughts, and see all activity on shared notes through a new activity viewer. There's also a new tool called Quick Note; swiping from the corner of the screen with the Apple Pencil brings up a new note that you can type or write into.

Safari is also undergoing major changes this year, across all of Apple's platforms. There's a new, minimal UI bar that puts tabs and the browser URL bar on the same row, saving some space. You can set up new tab groups, a feature that Google added to Chrome last year, and for the first time Safari on the iPad will support the same web extensions you can use on the Mac.

Developers will be happy to learn that the iPad can fully code apps for the iPhone and iPad using Swift Playgrounds app, as well. This actually marks the first time that you've been able to use an iPad to develop apps for an iPad. There's no word yet on when iPadOS 15 will arrive, but it should be here in September if history is any guide.

Apple first announced iPadOS at WWDC in 2019, a move to show that the iPad‘s software was worthy of being separate and distinct from iOS for phones. Historically, Apple has provided major updates to the iPad software experience every two years or so; while iPadOS 13 in 2019 provided some major, long-overdue UI and feature updates, last year’s iPadOS 14 mostly featured the same updates to core apps like Safari, Notes and Messages that were announced for iOS 14.

Prev: The Morning After: Which streaming TV box or stick is best for you?