realme has launched its affordable C Series smartphone in India, the realme C35 is a budget smartphone with an 8.1 mm slim design, 50 MP triple-camera, a large 5,000 mAh battery, and more. Take a look at our hands-on and first impressions of the realme C35 smartphone.

Looking at the realme C35, the design looks absolutely stunning, the glass-like finish, flat edges, realme calls it Dynamic Glowing Design that glows in the light, the overall looks resemble the current iPhone design. Even though it uses plastic materials, it feels solid in the hands and nicely fits in the palm. It also offers TÜV Rheinland Smartphone High-Reliability Certification which means the smartphone is tested and reliable. 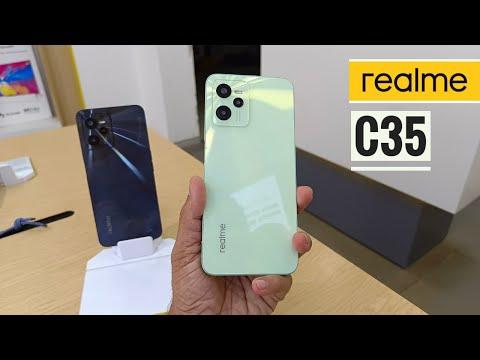 On the front side, the realme C35 comes with a 6.6-inch IPS display with Full HD+ resolution and a standard 60 Hz refresh rate. No AMOLED or 90/120 Hz display is available since it’s an entry-level and budget smartphone.

You also get stereo speakers for a better multimedia experience and a side-mounted fingerprint scanner embedded on the power button for locking and unlocking the phone. The bottom side has a USB Type-C port and 3.5 mm audio jack as well as one microphone, and stereo speakers (one at the earpiece). The top side has nothing aside.

The right side has a power button that also acts as a fingerprint scanner while the left side has volume keys and a triple-slot SIM tray that supports dual 4G SIM cards and a dedicated microSD card slot. There’s no 5G support as the SoC doesn’t come with a 5G modem, this makes the realme C35 fall behind the 5G competition.

The realme C35 equips an entry-level octa-core CPU, the Unisoc Tiger T616 SoC clocked at 2.0 GHz at max. The SoC is paired with ARM Mali-G57 MP1 for gaming, graphics applications, and GPU-intensive tasks. The CPU is equivalent to that of the last year’s realme C25Y (Unisoc Tiger T610) and is slightly better than the MediaTek Helio G70 (realme C25). Expect the performance to be suitable for daily use and fair for gaming.

It comes in two variants, 64 GB storage and 128 GB storage, both with a 4 GB RAM option, the storage can be expanded via a microSD card. The smartphone also offers a 5,000 mAh battery with 18W fast charging support.

The realme C35 runs on the Android 11 operating system with realme UI R Edition on top. It has a 5th February 2022 security patch which is the latest from Google as you can see in the image below. The realme UI R Edition is based on Android 11 and is designed for budget smartphones with a stock Android look. The realme UI 3.0 is a more advanced Android update compared to the R Edition interface and we expect realme C35 to receive the update soon, you can see the new realme UI 3.0 on top and loaded with features.

The realme C35 offers a 50 MP primary camera in its triple camera system, the rest two are 2 MP macro camera and one VGA camera for depth measuring. There’s an 8 MP camera on the front side for selfie and video calling needs. The 50 MP camera seems to be identical to that of the realme C25Y and offers a handful of camera features.

The realme C35 looks stunning, offers a great design, it has a Dynamic Glowing Design that glows when light falls on it, the flat edges and slim form factor makes the smartphone a solid looker. It also comes with a decent hardware package and the 50 MP camera appears suitable in the segment. We will share the camera samples, and other features of the realme C35 soon. Stay tuned.