Realme GT 2 and Realme GT 2 Pro smartphones have been unveiled at the Mobile World Congress (MWC) 2022 tech exhibition. To recall, the GT 2 series was first announced in January in China. Today, the company has unveiled it for the European markets. The event also saw the arrival of the world’s first 100W to 200W UltraDart fast charging technology, Realme Book Prime notebook, and Realme Buds Air 3 TWS earbuds.

The Realme GT 2 is powered by the Snapdragon 888, whereas the GT 2 Pro is a premium flagship driven by the newer Snapdragon 8 Gen 1 SoC. Both phones are equipped with stellar specs such as a 120Hz AMOLED display, 50-megapixel triple cameras, and a 5,000mAh battery with 65W fast charging. 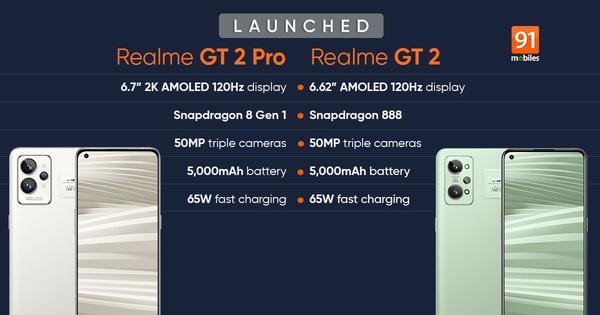 The Realme GT 2 has a 6.62-inch AMOLED screen that offers a 120Hz refresh rate and Gorilla Glass 5. It has a 16-megapixel front-facing camera and a 50-megapixel (main, with OIS) + 8-megapixel (ultrawide) + 2-megapixel (macro) triple camera unit.

According to Counterpoint Research, Realme’s smartphone shipments increased six times in 2020 in Europe. The growth of Realme also helped the European smartphone market recover after being impacted by the pandemic. In 2021, Realme became the fastest growing major smartphone brand in Europe. The success of its GT lineup and number series allowed Realme to achieve 280 percent annual growth in 2021. In addition, it has also managed to rank itself as a top five vendor in 2021 in Europe. Hence, it appears that the newly unveiled Realme GT 2 series will further assist the brand to boost its sales further in Europe.

Next: Oppo Find X5: Everything you need to know