Home > iPhone > Utah State University Athletics Utah State Men’s Basketball to Host Oregon in National Invitation Tournament
LOGAN, Utah –Utah State men's basketball will be making its 34th postseason appearance all-time, including its 10th in the National Invitation Tournament, as the fourth-seeded Aggies will host Oregon in the Dee Glen Smith Spectrum on Tuesday, March 15, at 7 p.m. The game will be national televised on ESPN. The last time Utah State hosted a Power-5 opponent in the Dee Glen Smith Spectrum was during the 2013-14 season when it posted an 87-68 win against Mississippi State. The last Pac-12 opponent to play in Logan was USC during that same season as USU notched a 78-65 win against the Trojans. Utah State has now qualified for the postseason in each of the last four years as it played in both the 2021 and 2019 NCAA Tournaments, and was the Mountain West's automatic qualifier for the 2020 NCAA Tournament prior to it being cancelled due to the COVID-19 pandemic. All-time, Utah State has advanced to the NCAA Tournament 23 times, will be playing in the NIT for the 10th time and participated in the CollegeInsider.Com Tournament in 2012 as it played five-straight home games before losing in the championship game. Prior to its run in the CIT, USU's last postseason win was against Ohio State (77-68 OT) in the 2001 NCAA Tournament. Utah State last appeared in the NIT in 2008 when it lost at Illinois State (61-57). The Aggies will be hosting an NIT game for the first time since 2004, when it lost to Hawai'i, 85-74, and for the fifth time in school history. USU is 2-9 all-time in the NIT, which includes an 0-4 home record. USU's last win in the NIT was in 1960 went it went 2-1 with wins against Villanova (73-72 OT) and St. Bonaventure (99-82) and a loss to Providence (68-62), as all three games were played in New York City. Utah State (18-15, 8-10 MW) enters the NIT after falling in the quarterfinals of the Mountain West Tournament to No. 23 and second-seeded Colorado State, 53-51. USU began the MW Tournament with an 83-56 win against 10th-seeded Air Force in the opening round. Utah State currently has a 9-6 home record this season and has won at least 10 games inside the Dee Glen Smith Spectrum in each of its last 28 years dating back to 1992-93 season. Entering the NIT, Utah State has an NCAA Men's Basketball NET Ranking of 60, an overall strength of schedule of 87, and a 2-11 record against Quad 1 teams with wins against Oklahoma (73-70) and San Diego State (75-57). USU also has a 3-1 record against Quad 2 opponents, a 3-1 record against Quad 3 opponents, and a 9-2 record against Quad 4 opponents. Utah State also has a combined 4-11 record against 2022 postseason teams, which includes wins against NCAA Tournament teams New Mexico State (85-58), Richmond (85-74) and San Diego State (75-57), along with a win against Oklahoma (73-70), who is in the NIT. Utah State and Oregon will be meeting for the first time in postseason play, but for the seventh time overall, as the Ducks hold a 6-1 advantage in the series. The last game played between the two teams was during the 1965-66 season with USU posting a 77-66 road win. The Ducks went 19-14 in the regular season, finishing 11-9 in Pac-12 games to tie for fifth-place. Utah State has two players averaging double figures in scoring this year in senior forwardJustin Bean, a second-team all-MW selection and a member of the league's all-defensive team, and senior forwardBrandon Horvath, who was named third-team all-MW. Bean is averaging 17.7 points and 9.8 rebounds per game, while shooting 54.5 percent from the field (225-of-413), 47.4 percent from 3-point range (46-of-97) and 79.8 percent (87-of-109) at the free throw line. Horvath is averaging 13.8 points and 6.6 rebounds per game, while shooting 52.1 percent overall (175-of-336), including 32.7 percent (36-of-110) from behind the 3-point arc, and 59.2 percent (71-of-120) at the charity stripe. Despite having just two players that average double-digit points, Utah State has three more players that average at least 8.0 points per game in junior guardSean Bairstow (9.4 ppg), sophomore guardSteven Ashworth (8.3 ppg) and senior guard RJ Eylte-Rock (8.0 ppg). Utah State has four players on its current roster with postseason appearance as Bean and senior guardBrock Miller have both played in two NCAA Tournaments, while Ashworth and sophomore guardMax Shulga both played in last year's NCAA Tournament. Utah State head coachRyan Odom is in his first season at Utah State and is 144-96 (.600) in eight seasons as a collegiate head coach. This will be his third postseason appearance as he led UMBC to the semifinals of the CIT in 2017 and to a historic first-round upset of overall No. 1 seed Virginia (74-54), as UMBC was the first-ever 16-seed to win an NCAA Tournament game.The winner of the Utah State-Oregon game will face the winner of the Texas A&M (23-11) vs. Alcorn (17-16) contest on either Saturday or Sunday, March 19-20. Tickets for Utah State's first round NIT game against Oregon will go on sale on Sunday, March 13, at 10 p.m., at www.utahstateaggies.com. Due to a generous donation, all USU students will be allowed into the game free of charge. For more information on Utah State's men's basketball program, follow the Aggies on Facebook at usumensbasketball, on Twitter at @usubasketball and on Instagram at @usubasketball. Fans can also watch USU men's basketball highlights by visiting youtube.com/utahstateathletics. Print Friendly Version 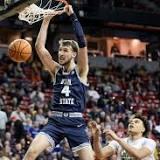