Home > iPhone > Volunteers from N.J. fly to Ukraine border and find hope in the midst of war

Last Thursday was day six of Russia’s war on Ukraine, and Darshan Patel, like most of us, was feeling a mix of frustration, grave concern, and futility.

Patel, a resident of Pennington, texted a group of friends and fellow attendees from the local BAPS Shri Swaminarayan Mandir in Robbinsville who he knew felt the same watching the devastation overseas unfold:

“What can we do to help?” Patel asked the group. Included were: Dharmik Sheth, new father to a four-month-old son and a director at Bristol Myers Squibb; Ravi Patni, a father of two and member of Robbinsville Township Planning Board; and Bhagwatprasad Patel, a small business owner from Middlesex County.

By 4 p.m. that same day, they had all left for Newark Liberty International Airport and booked tickets to Poland.

“Initially you have your concerns and your fears but putting all of that to the side, now is the time to take action,” said Patel, speaking with NJ Advance Media from Budomierz, a southeastern Polish city close to the border with Ukraine.

As members of BAPS Shri Swaminarayan Mandir — an organization that promotes the Hindu ideals of faith, unity, and selfless service, according to the BAPS website — Patel said all four men grew up hearing stories from spiritual leaders of immense sacrifice and humanitarian service. Those stories “energized and motivated” them to turn their anguish as onlookers into actionable change, Patel said.

BAPS Shri Swaminarayan Mandir has a worldwide network of over 3,850 centers and its international volunteers sprang into action last week to support emergency relief efforts on the ground when the crisis in Ukraine began to unfold. The organization set up a mobile field kitchen in the southeastern Polish city of Rzeszów, which has begun feeding around 1,000 hot vegetarian meals daily to refugees. When Patel and his fellow volunteers from New Jersey connected with BAPS organizers in Europe Thursday morning, they quickly made arrangements to meet them at the mobile field kitchen that same night.

The BAPS team from New Jersey arrived in Warsaw Thursday night and then traveled four hours to Rzeszów, where they immediately began greeting busloads of refugees, Patel said. By the time they had a moment to rest for the first time, it had been 36 hours since their arrival in Poland.

“We didn’t realize what day it was, what time it was, or anything until that point,” Patel said.

The BAPS mobile food kitchen in Rzeszów is set up at a humanitarian center providing various forms of relief. The center was formed in collaboration with a few organizations, like the Red Cross, and provides refugees with food, accommodations, medical assistance, and arrangement for travel to help them continue their journey, wherever that might be. Many of the refugees arriving at the humanitarian center are international students who were studying at universities in Ukraine when Russia invaded, Patel said.

“They share stories of waking up to the sound of bombs,” he added. 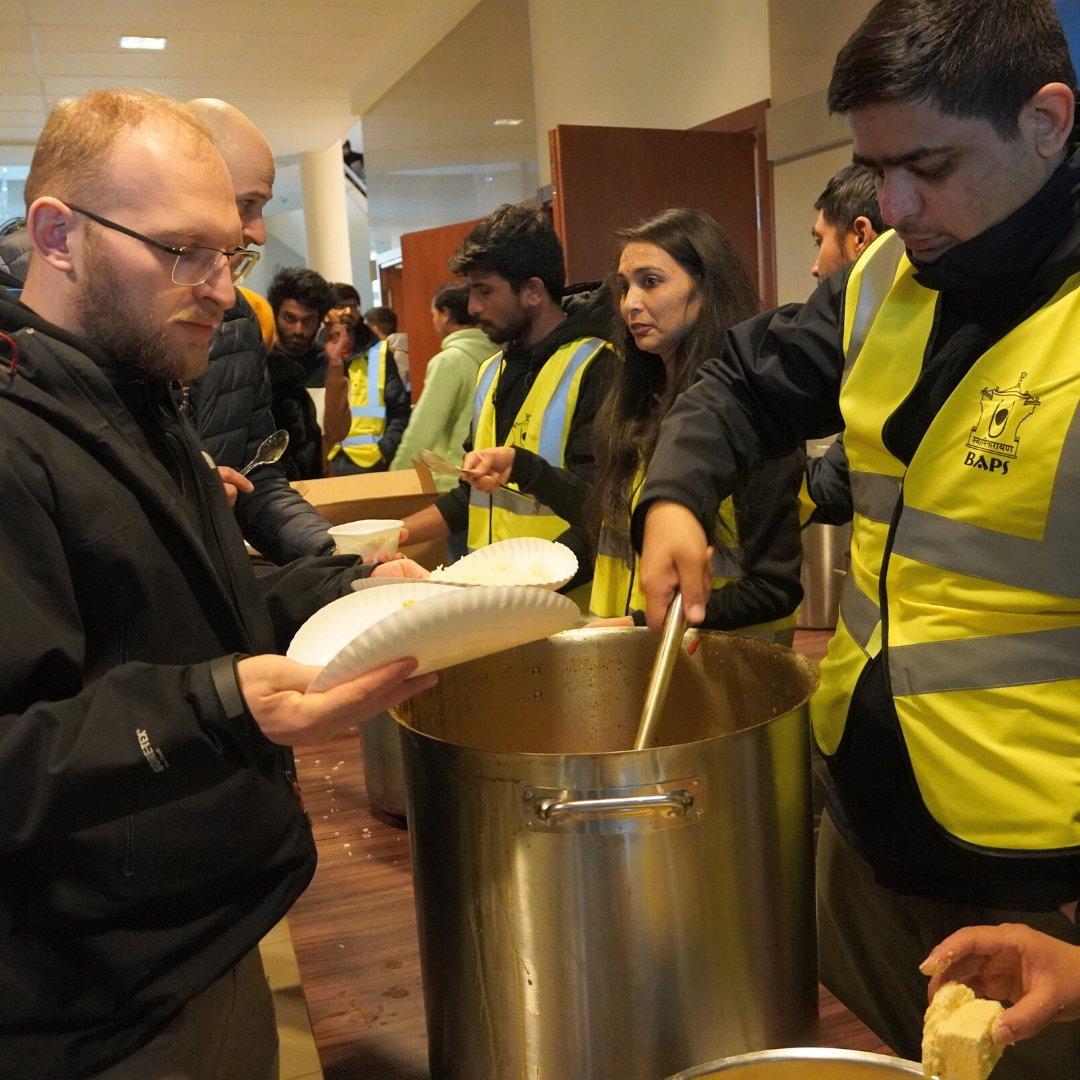 The war has thrust them into a terrifying journey out of Ukraine, with some students walking more than 20 miles to cross the border, spending the night in underground bomb shelters and metro stations along the way, Patel said. They rely on WhatsApp, an encrypted messaging service, to communicate safe travel routes and discuss where to access humanitarian relief.

“They want to get the message out there to other people who are stranded, to give them strength to persevere and evacuate over the border,” Patel told NJ Advance Media on Saturday. He and the BAPS volunteers from New Jersey were wrapping up their service in Rzeszów that day and heading to Budomierz, a checkpoint for evacuees just two miles from the Ukrainian border.

“We wanted to be able to sort of expand our reach and see, what else we could do? Who else we could offer our services for?” Patel said.

The BAPS volunteers team connected with organizers of the Indian Student Union of Poland, assisting evacuees disembarking in Budomierz. In an advisory issued last week by the Indian embassy in Warsaw, Indians stuck in western Ukraine were told to travel to the Budomierz border checkpoint for a relatively quick entry into Poland. The embassy said an estimated 20,000 Indian students were in Ukraine at the time the invasion began, and 60% had been evacuated by early last week.

“We’re going to a train station where there are some individuals who recently crossed, and we’re going to do our best to help them,” Patel said.

Asked if he was concerned about heading closer toward the center of conflict, Patel said he and the BAPS volunteers were aware of the danger. Journalists making their way toward the frontlines have been warning them “there is a high risk that closer the Ukraine - Poland border, that there may be bombing there,” he said.

But the danger hasn’t made them run in the other direction. If anything, Patel said it has only contributed to a “sense of urgency” and importance in their work.

The volunteers from BAPS Shri Swaminarayan Mandir in Robbinsville are paying for their expenses out of their own pockets, but BAPS is arranging for basic accommodations and meals throughout the humanitarian mission, which ends Tuesday.

Although the war shows no signs of subsiding yet, Patel said what he and the BAPS volunteers have seen in Poland has given him hope.

“The first thing that comes to mind is that it’s the 21st century, this sort of thing shouldn’t be happening. But the corollary to that is, it’s the 21st century and people are able to mobilize within the same day and go out somewhere and help,” Patel said. “Seeing the world come together here has restored my faith in humanity.”

Russia’s war on Ukraine is still ongoing and continues to upheave the lives of ordinary people. The United Nations said more than one million refugees had fled the country so far. But not everyone has to travel to Poland like the BAPS volunteers to help them — NJ Advance Media has numerous other ways you can help Ukraine.

Our journalism needs your support. Please subscribe today to NJ.com.

Jackie Roman may be reached at jroman@njadvancemedia.com.

Next: Vivo V17 vs V17 Pro: Price, features and specifications, check details inside!