The budget smartphone industry is smashing it these days. With 5G connectivity, capable processing power, and beautiful AMOLED displays churning out refresh rates up to 120Hz at surprisingly affordable price tags, these dark horses put into question the oft-exorbitant cost of flagship phones.These are the smartphones that step into the ring against the likes of Floyd “Apple” Mayweather or Mike “Samsung” Tyson and surprise roaring crowds by rope-a-doping the lot. Currently, the two Android phones knocking out their competition with swift right hooks are the Xiaomi Redmi Note 11 Pro and Realme 9 Pro+ — both at the top of their game as thebest budget smartphones to buy. However, in a bout of furious blows against each other, it’s difficult to decide who to place your bets on.

With both smartphones priced below $400(£400), boasting bright and vivid AMOLED displays and bringing 5G into the fold, the Redmi Note 11 Pro and Realme 9 Pro+ are gearing up to swipe the lightweight champion belt (we’ll leave the heavyweight title to the likes of Apple and Samsung). Alright, enough boxing idioms. Find out which budget smartphone is best for you as we pit these exemplary Android phones against each other.

The Redmi Note 11 Pro 5G with 8GB of RAM and 128GB of storage is priced at an incredibly low $329 in the U.S., which works out to be around £245 in the U.K. That’s astounding, even when comparing it to some of the other top budget smartphones on the market today. To put its price into perspective, you could grab three Redmi Note 11 Pros ($987) and it would still be cheaper than the base modeliPhone 13 Pro ($999).

The Realme 9 Pro+ is the priciest of the budget 9 series lineup, which will set you back £349 with 8GB of RAM and 256GB of storage. For a limited time, however, it’s available for just £299. This deal initially was meant to only last from March 4 to March 6, but there’scurrently another deal running until March 21. It’s safe to say the Realme 9 Pro+ will frequently have deals taking £50 off the price tag. Realme doesn’t trade in the U.S., so this is one for those in the U.K. and Europe for now. However, converting to the U.S. dollar, the phone would cost around $391.Compared to their competition, including the new $429/£419iPhone SE (2022), £399 (around $530)OnePlus Nord 2, and $499TCL 20 Pro 5G, both smartphones are more affordable choices. Clearly, the Redmi Note 11 Pro is the cheaper option, although it has half the storage of the base256GB Realme 9 Pro+. There’s around a $80/£60 price difference, and while the Realme offers more storage, the Redmi boasts a larger 5,000mAh battery capacity and a smoother 120Hz display.The Redmi Note 11 Pro 5G takes the win, as it offers better value for money while still having a respectable 128GB of storage.Winner: Xiaomi Redmi Note 11 Pro 5G

Design plays a significant factor in choosing a smartphone, and by look and style alone, the Realme 9 Pro+ is the fancier model on the catwalk. On the other hand, by form and function, the Redmi Note 11 Pro gets the upper hand. 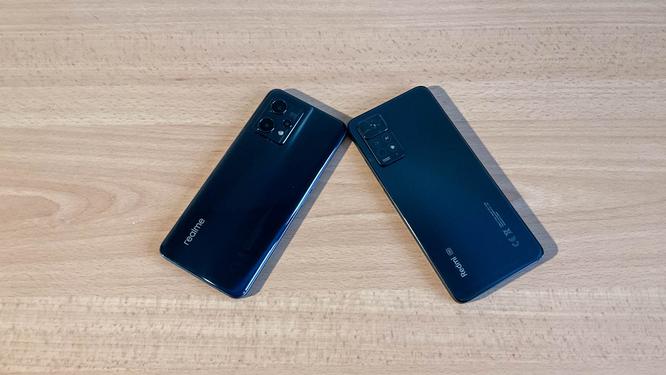 Thanks to a “three-layer process” used on the back cover, the Pro+ creates a nifty shining effect with a vibrant vertical beam that gleams from every angle. It brings a more polished, flagship look to an otherwise budget smartphone. In our review, I stated that I was a fan of the glint, but the back cover is slippery, meaning it could be prone to falling off surfaces if it's placed on any sort of angle.The Realme 9 Pro+ also comes in three colors: Midnight Black, Aurora Green and Sunrise Blue. That last one is the star of the show; it’s Realme’s first “Chameleon” smartphone, changing color from blue to red under sunlight or ultraviolet light. It’s also the company’s slimmest smartphone to date at 0.3 inches thick and weighing a light 6.4 ounces.

As for the Redmi Note 11 Pro, Xiaomi doesn’t do much to make its somewhat brick-ish phone stand out in the sea of Android phones. However, it has a formidable yet subtle flagship charm to it, sporting a classy shine even in its standard Graphite Gray. It also comes in a more appealing Atlantic Blue and Polar White. Despite being far from the most stylish phone out there, its smooth rounded edges, small centred hole-punch camera, and handy fingerprint sensor (embedded in the power button at the side of the phone) make it easy to handle.The Realme 9 Pro+ places its hole-punch camera on the top-right of the display, and while it's bigger than Redmi’s, the placement is more visually pleasing on the display. The camera layout on the Realme — akin to the iPhone 13 — is also more attractive, while the Redmi sticks to a bland, quad-lens formation with a noticeably huge lens on top.In terms of size, the Redmi measures 6.4 x 2.9 x 0.3 inches and weighs 7.1 ounces, which is considerably heavier and bigger than the Realme, but both phones are just as thin at 0.3 inches.

Smartphones under $400 that are equipped with an AMOLED display are head-turners, which makes the Redmi Note 11 Pro’s 6.6-inch 120Hz FHD+ AMOLED DotDisplay and the Realme 9 Pro+’s 6.4-inch 90Hz Super AMOLED an absolute treat for budget phone customers. As you can tell, having a bigger screen with a 120Hz refresh rate on a cheaper phone means the Redmi takes the crown.

In practice, however, the Realme holds its own in the display department. I watchedThe King’s Man on Disney+, replaying the fight scene with Rasputin that saw him dance with swords aplenty. I was impressed by the dancing antics being caught in full motion on the display, with the phone capturing the ballroom’s warm and polished atmosphere as the two clashed swords. Anyone who likes viewing shows and movies on the move will be happy with what the Pro+’s AMOLED display delivers. Plus, the Realme’s video color enhancer, boasting SDR-to-HDR technology, makes colors pop.

That said, the Realme 9 Pro+’s detail isn’t as crisp as the Redmi Note 11 Pro’s. I watched Spike Jonze’sHeron Netflix, and I was completely engaged by the vibrant shades of red spotted throughout the movie. The Note 11 Pro does a great job at capturing the subtle details of the somewhat futuristic corporate world Theodore (Joaquin Phoenix) finds himself in, and it was a joy to watch on the 6.6-inch screen. The Redmi also has a “Vivid” option that adjusts colours based on the content being displayed.

When scrolling through social media apps and articles online, there isn’t much difference between refresh rates in reality. Plus, with the Realme only going up to 90Hz, it’s less taxing on the phone’s battery. Still, when it comes to gaming, the Redmi comes out on top, as it allows for the highest available refresh rates in games such as Call of Duty: Mobile.Both smartphones boast great displays for watching content, scrolling through apps and playing games, but the Redmi Note 11 Pro has an edge over the Realme 9 Pro+, thanks to its larger display and higher 120Hz refresh rate.Winner: Xiaomi Redmi Note 11 Pro 5G

The Redmi Note 11 Pro and Realme 9 Pro+ aren’t the powerhouses the modern flagship smartphones are, but they can impressively pull their own weight, especially for the price. For normal tasks such as opening multiple apps and tabs, you’d be surprised by how much they can handle. However, one chip outperforms the other.

The Redmi Note 11 Pro comes with a Qualcomm Snapdragon 695 5G processor with a Qualcomm Adreno 619 GPU, 8GB of RAM and 128GB for storage. I tested its real-world performance, opening a couple of dozen activeGoogle Chrome tabs while watchingHeronNetflix in a small window. I also slipped between the Chrome tabs and Call of Duty: Mobile to see how fast it could switch between the two. Even when I had the Netflix window playing and another video running in a tab, I didn’t experience any slow down. However, the frame rate seemed to take a hit, as scrolling through a web page became more jittery. Once I hit the 24 tab mark, I did see a delay in other web pages loading up, but only by a couple of seconds. All in all, the Redmi Note 11 Pro has plenty of multi-tasking potential.

The Realme 9 Pro+ is equipped with a capable MediaTek Dimensity 920 5G processor paired with 8GB of RAM and 128GB of storage. Putting it through the same paces, I opened a couple of dozen active Google Chrome tabs while watchingThe King’s Man on Disney+ in a small window. I also slipped between the Chrome tabs and Call of Duty: Mobile to see how fast it could switch between the two. Fortunately, I didn’t notice any hiccups or delays in apps launching; the 90Hz refresh rate stayed smooth throughout my continuous scrolling and swipes.Putting both phones through the Geekbench 5 test, the Redmi Note 11 Pro delivered a multi-core score of 2,018, while the Redmi 9 Pro+ scored a better 2,318. In the 3DMark Wild Life Unlimited test, the Pro+also took the win with an overall score of 2,297 with an average frame rate of 13.8 frames per second. The Note 11 Pro clocked an overall score of 1,210 with an average frame rate of 7.3 frames per second. The latter just can’t keep up.Interestingly, while playing a few rounds of Call of Duty: Mobile, the Pro+ automatically switched to “medium” graphic quality and to “very high” frame rates. The Note 11 Pro ran on high-graphics quality and max frame rate, showing that it's surprisingly the better smartphone to game on. This is due to the Redmi’s 120Hz refresh rate, along with a “Gameturbo” menu that lets users switch to “Performance mode” for a better experience. Still, I was able to get all the same headshots with the Realme 9 Pro+, and the differences aren’t as apparent.The Realme 9 Pro+ outperforms the Redmi Note 11 Pro, so it takes another win.Winner: Realme 9 Pro+

With the Redmi Note 11 Pro sporting a 5,000 mAh battery with a 67W turbo charger, and the Realme 9 Pro+ offering a 4,500mAh battery capacity with a 60W SuperDart charger, you’d think that the Redmi would come out on top. However, the 120Hz refresh rate and optional performance mode can drain the battery; the Redmi’s 90Hz display doesn’t suck up as much juice.

With the Realme, I was able to make it through a day of heavy usage and still have 15% left. The Note 11 Pro’s battery only went below the 10% margin after nearly a full day (just under 14 hours) of heavy usage. With moderate usage, I could eke out two days with both phones.In terms of charging speed, I was able to charge the Note 11 Pro from 0% to 50% in around 19 minutes, while it took 22 minutes for the Pro+. The Redmi is slightly faster thanks to the 67W turbo charger, but in the real world, that four-minute difference isn’t that noticeable. Both phones have great battery life, and charging speeds are almost equally as zippy.Winner: Draw

If Realme stuck with its usual 108-megapixel main shooter, there wouldn’t be much of a match with Redmi Note 11 Pro’s same 108MP wide camera. However, Realme changed up its camera system this time around, housing a 50MP Sony IMX766 camera with optical image stabilisation (OIS) as its main sensor. This changes the game; the Realme had a more capable camera.

Darragh Murphy is fascinated by all things bizarre, which usually leads to assorted coverage varying from washing machines designed for AirPods to the mischievous world of cyberattacks. Whether it's connecting Scar from The Lion King to two-factor authentication or turning his love for gadgets into a fabricated rap battle from 8 Mile, he believes there’s always a quirky spin to be made. With a Master’s degree in Magazine Journalism from The University of Sheffield, along with short stints at Kerrang! and Exposed Magazine, Darragh started his career writing about the tech industry at Time Out Dubai and ShortList Dubai, covering everything from the latest iPhone models and Huawei laptops to massive Esports events in the Middle East. Now, he can be found proudly diving into gaming, gadgets, and letting readers know the joys of docking stations for Laptop Mag.