Following the debut of thenew-gen Toyota Land Cruiser earlier this year, Lexus has now taken the wraps off the all-new LX flagship SUV. Underpinned by the same TNGA-F body-on-frame architecture, the new Lexus LX is essentially a more luxurious and opulent version of the new Land Cruiser.

As with its predecessor, the new LX is the sister model to the new Land Cruiser LC300. Seen in profile, the upright and boxy stance, prominent squared-out wheel arches are all shared design elements, though Lexus has added enough unique touches for the LX to stand out. The flat and high nose is dominated by a huge Lexus grille which is flanked by sleek LED headlamps on both sides. The front bumper features gaping air dams and the bonnet is aggressively sculpted.

Along the sides, while the window line too is similar for the most part, the LX gets a revised design for the rear quarter windows. The LX also sits on larger 22-inch alloy wheels. The rear is characterised by LED tail-lights connected by a light bar, ‘Lexus’ spelled out on the tailgate instead of the usual logo, and a chunky rear bumper with silver skid plates.

The cabin too shares some basics with the new LC300, though Lexus has done a lot to help the new LX stand out. While the basic dashboard design is similar, the LX’s unit is dominated by a twin-screen set-up – an upper, free-standing 12.3-inch screen that functions as the infotainment system and display for the 360 degree camera, and a lower 7.0-inch screen that shows various off-road data and climate control functions. The lower display is flanked by vertical air-con vents, with Lexus having revised the entire centre console layout. Just like the Land Cruiser, the LX’s starter button also has a fingerprint scanner.

Range-topping LX gets a four-seat layout.

The biggest upgrade to the cabin though is the new four-seat layout available on the new LX600 Ultra Luxury. In this range-topping trim, the LX600 gets individual rear seats, separated by a full-length centre console, capable of reclining by up to 48 degrees. Rear occupants sitting behind the co-driver also get a boss mode to move the front seat forward for greater space and a fold-out legrest for added comfort. Rear occupants additionally also get their own displays, including two rear-seat entertainment displays and a touchscreen on the centre console to control functions such as seat recline and rear climate zones. 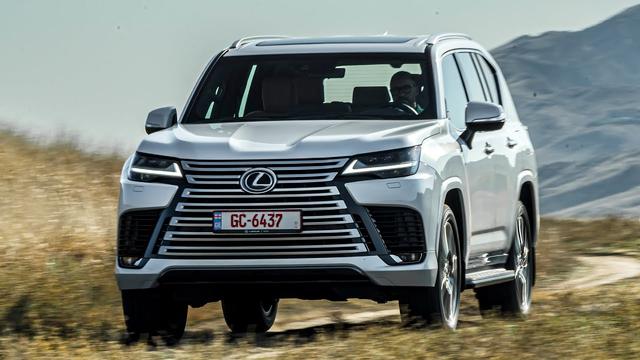 As always, the LX continues to be available with a 7-seat layout as well.

Both engines come mated to a 10-speed automatic transmission, sending drive to all four wheels. Underpinned by the TNGA-F platform, the LX carries forward all the off-road upgrades from the Land Cruiser LC300. It gets electronic locking differential at both ends, adaptive suspension that changes ride height based on the terrain, and multi-terrain modes – Auto, Dirt, Sand, Mud, Deep Snow and Rock – that alter various parameters of the vehicle. It also gets crawl control that allows you to change the vehicle’s crawling speed without throttle inputs.

Also new to the LX line-up is an F-Sport variant that gets mechanical upgrades aside from cosmetic updates. Apart from visual updates such as darkened 22-inch alloys and mesh-finished grille, the F-Sport gets a retuned suspension along with a rear stabiliser bar, and most importantly a Torsen limited slip differential at the rear for greater traction.

Interestingly, the Japanese domestic market (JDM) also gets a version of the LX in line with the more off-road focused Toyota Land Cruiser GR Sport. Called the LX Off-road, the region-specific model gets upgraded hardware such as three locking differentials, darkened 18-inch wheels, and blacked-out cosmetic elements, including the wheel arch cladding, to give it a more rough and ready look.

Lexus LX: will it come to India?

Although there’s no official word as yet, the new-gen Lexus LX could be on the cards for a launch in India, given that its predecessor is still on sale here. Similarly, the new-gen Land Cruiser is also expected to make it to our shores. In India, the Lexus LX will rival the likes of the Mercedes-Benz GLS and BMW X7.