Home > Samsung > Four things I like about Nokia T20 Tablet

The Nokia T20 is Nokia Mobile’s first tablet and, shall we say, the third tablet to proudly wear the Nokia logo on the back. The first was the WinRT-powered Nokia Lumia 2520 from 2013, and the second was the Android 5 running Nokia N1 from 2014. The Nokia T20 is one of the few devices released by Nokia Mobile that I really like, and I will try to give four reasons why.

The design of the T20 is nothing revolutionary, it’s a rectangle with a 10.36-inch screen that has practical bezels around it like any other tablet. But the tablet is perfectly balanced for horizontal and vertical use, and it’s pretty sturdy thanks to the aluminium body that has an IP52 certificate (will survive drops of water). Plus, you can easily hold it vertically with just one hand. The stereo speakers are cleverly positioned on the sides so you do not have to cover them with your hands while watching a video or conference. The two microphones are located directly above the camera, which is ideally positioned for the Zoom or MS Teams meeting or classes. Nokia’s OZO Playback and OZO Audio take care of the quality of the recorded and played back sounds. 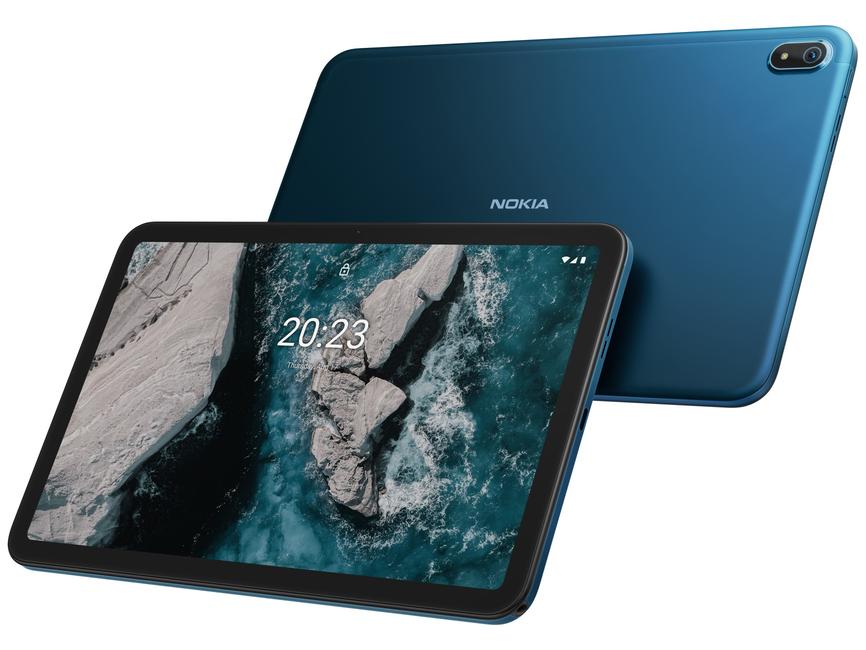 Nokia Mobile may not have used the best-in-class AMOLED display, but it has used a high-quality 2K display LCD with SGS certification for low blue light and a brightness of 400 nits, which is enough for working in bright indoor and outdoor light. The screen is sharp enough to read pdf books, edit Excel spreadsheets, or watch your favourite show.

All tablets have large batteries, but the Nokia T20 is equipped with an 8200 mAh battery that keeps the device alive for days on a single charge. This tablet can be charged at 15W, which is not exactly the fastest on the market, but unless you are using your tablet as a smartphone, you’ll probably charge it overnight. Another reason for the long battery life is the Unisoc T610 octa-core processor, which is powerful enough to keep the T20 running smoothly and energy-efficient. Also, T20 features BT5.0, an energy-efficient way to connect to audio gadgets or earbuds that will help save up some battery since you won’t be using speakers.

The Nokia T20 may not have the best hardware features, but it has everything you need to get things done at a really good price. It’s an affordable tablet (235€) that will serve you well for a very long time, as it comes with two years of OS and three years of security upgrades. It also features a beautiful design, an aluminium body, OZO Audio and OZO Playback, stereo speakers and microphones, and a high-quality display.

There are some things that I think could be improved, like better mapping of the volume buttons, or addition of the double tap to wake the tablet. The back and front cameras are good for video calls, and you’ll mostly (I hope) be using it for that. The front glass could be Gorilla 3 which shouldn’t raise the price of the tablet that much or at all, but a flip cover will handle scratches (that will raise the cost for approximately 50 euro)

Next: Top realme UI 3.0 features that you should know