Gogoro, the company behind what has become the de facto standard for swappable batteries in light electric vehicles, has just unveiled the world’s first swappable solid state EV battery prototype.

The battery was co-developed with ProLogium Technology, a solid state battery industry leader with expertise in Lithium Ceramic Batteries (LCBs).

The Taipei-based battery and EV company Gogoro unveiled the new solid state battery prototype this morning, with Taiwanese media being the first to test the new battery in Gogoro’s electric scooters.

Gogoro has made its name on its swappable battery system. The company has produced over 1 million of its lunchbox-size batteries, which can be swapped in seconds at thousands of battery swap stations to instantly “recharge” light electric vehicles like electric scooters and motorcycles. Gogoro produces its own best-selling electric scooters, though large companies like Yamaha also partner with Gogoro to put Gogoro’s batteries in their own electric scooters.

The new solid state Gogoro battery pack, which is still undergoing development, is said to be capable of boosting Gogoro’s current capacity of 1.7 kWh per battery to an impressive 2.5 kWh. That 40% increase in energy density would result in a comparable increase in range.

In LCBs, the thin yet hard ceramic layer makes it impossible for dendrites to puncture the plastic separator, a leading cause in the exceedingly rare yet devastating lithium-ion battery fires. The batteries are thus able to charge faster, with ProLogium previously floating figures like 12-minute charge times in the past. 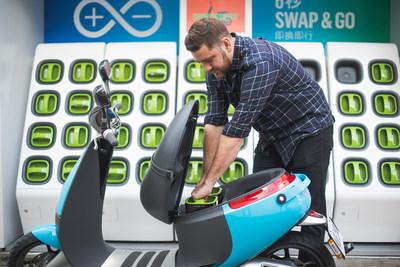 The combination of increased range and improved safety seems to be key reasons behind Gogoro’s push toward solid state batteries, as Luke explained:

Gogoro is unveiling the world’s first solid state battery for two-wheel battery swapping because it’s imperative we take advantage of the latest battery innovations to introduce a new era of electric transportation growth and adoption in our cities. We partnered with ProLogium Technologies, a global leader in solid state battery innovation, to jointly develop this new battery that delivers higher energy density for better range, improved stability and safety, and it is reverse compatible with all existing Gogoro-powered vehicles.

ProLogium’s CEO and founder Vincent Yang seems just as excited about the commercial prospects of the Gogoro partnership in the future:

As leading global battery innovators, Gogoro and ProLogium have partnered to jointly design solid state battery prototypes that integrate with Gogoro’s battery swapping network and two-wheel vehicles Solid state battery technologies present a new phase in the future of electric vehicles, and we look forward to advancing this Gogoro prototype battery into a commercial offering in the future.

This is definitely a big day for the electric vehicle battery industry. Swappable batteries are key in light electric vehicles such as electric scooters and motorcycles. They make it possible for owners to charge their vehicles even without having their own garage or access to on-street chargers. The 9.5 kg (21 lb) Gogoro battery can simply be removed from the vehicle and immediately placed into one of Gogoro’s swapping stations in exchange for a fully charged battery.

Before you go getting too excited though, Gogoro doesn’t appear to be filling its thousands of swapping stations with these new solid state batteries. This is very much a prototype, and I’m not even sure it is commercializable yet to the point where Gogoro can financially justify it. The company is showing what is possible with its swappable battery design, as just about any type of battery cell can be used (Gogoro currently employs 21700-format cells, but its case design can work equally well with pouch or prismatic cells, which appear to be the type of cells that ProLogium produces).

Another interesting consideration is that the higher-energy-density batteries can open the door of possibilities to usage in light-electric four-wheeled vehicles like quadricycles or NEVs. A typical golf cart has around 2.5-5 kWh of battery capacity. That means one or two of these Gogoro batteries could easily power it.

The famous “$5,000 Wuling Mini” electric car (don’t get me started on how it’s not really a “$5,000” car) has battery options of 9, 13, and 26 kWh. The first two would require between three to five Gogoro batteries. Pulling out 10 batteries for the highest-range version might be a bit much. At a certain point, it would be ridiculous to have a dozen removable batteries, but a handful could mean the difference between EV ownership or not for those that simply don’t have a good place to plug in.

Imagine driving your car up to a battery swap station with 5% charge left in your batteries, performing the functional equivalent of unloading groceries, and then driving away three minutes later with a 100% charge. Sign. Me. Up.

Next: Installment Plan for Mobile Phones: A new strategy for mobile retailers