Brexit is the best thing that happened, said no one ever. It took over a month for Nokia XR20 to come for a review from the UK, but who cares, the toughest Nokia is finally here and let’s unbox it.

Nokia Mobile announced the toughest Nokia phone to date on July 27th intending to introduce the best toughest phone in the not so saturated market of durable phones. What makes XR20 different when compared to other tough smartphones is its design. This phone is probably the best-designed phone in its class, and all the adventurers can not only take it for hiking on mountain trails without fear of breaking it if dropped, but can also take it wherever they want since the phone is combining nicely the toughness and industrial design of the frame.

The box of the XR20 is of the same size as the box of Nokia 8.3 5G, and it opens the same, by sliding the top cover off. The phone is nicely presented at the front and what might attract buyers is not only the design but the promo message from Google that XR20 is going to have three years of Android OS updates and four years of security updates.

At the back of the box, you’ll find a summary of the most important specs that make the Nokia XR20 special. You will see it has a MIL-810STD certificate that suggests it can withstand drops on the floor and in puddles. Then, the IP68 certificate tells that XR20 is dust and waterproof. An interesting fact is that a 6.67-inch IPS LCD screen is protected by Gorilla Victus glass. There are also some details about the 48 MP main camera that comes with ZEISS lenses and dual-LED flash and info bout the 4630 mAh battery and the ways you can charge it (like wirelessly over wireless charger for example).

Qualcomm SD480 5G chipset is not mentioned, but there is a Qualcomm logo for all the guys that don’t like MediaTek chipsets inside their phones. The box is not bringing an 18W charger, nor headsets, so that one you’ll have to get in the Nokia store, like some additional accessories you might like to have. Nokia Mobile is supplying a meter long USBc charging cable, SIM door pin, user manual and product safety booklets and a phone, of course.

The device itself is wrapped in plastic which could also be eliminated from the box to stop creating plastic waste. I like how the charging cable is packed in a thin carton, and so the device might come in some thin paper wrap too. 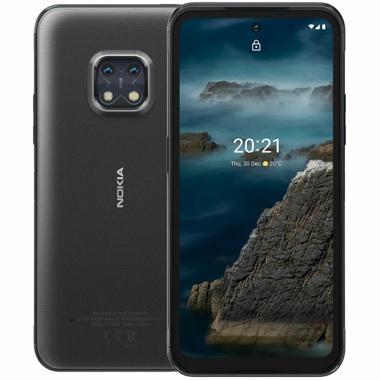 Anyways, when you take the device, you instantly notice its weight and large dimensions even though it is a bit shorter than Nokia 8.3 5G. But, since this is a tough phone, it is expected for it to be a bit more massive than a standard smartphone. I must say that I like its design, unlike the other tough phones that really look like some kind of industrial equipment. XR20 is really soft in touch due to the rubberized shell that is nicely textured at the back so it won’t slip from your hand, even though that is allowed to do.

The aluminium body is visible on the left and right sides, but the top and bottom parts together with corners are rubberized because those parts are most likely to touch the hard surface first. The body is elevated around 1mm from the screen, so if you lean it on the surface the screen won’t be touching it if the surface is not that rough, of course. The screen has an 8 MP selfie camera in the top centre part, and above it is a speaker hidden behind the headset speaker mesh.

On the front, you have 6.67 inch IPS LCD screen that reaches maximally 550 nits of brightness. The screen is surrounded by a few mm thick bezel which is a bit thicker at the bottom, but not so thick to have the Nokia logo printed. That logo is now placed on the right bottom side of the device, and above it are a power button with a fingerprint reader built-in and a volume rocker with slightly raised ends for volume up and down controls.

On the top, you get one microphone hole, the programmable emergency key with a possibility to program short and long press, and a SIM door that holds two nano-SIM cards or one SIM card and one micro SD memory card. On the bottom, you’ll find a line yard hole, a 3.5 mm jack for your headphones, another microphone hole and a bottom-firing speaker. On the left side, you have a large textured Google assistant button which you can luckily disable in the settings.

The back is textured and holds a dual-camera setup in a square-shaped camera module that also has two LED flashes.

Here are the basic specs of the Nokia XR20:

The phone is coming with Android 11 right out of the box, and I got the latest V1.110 Android Build and later did the August security patch installation. The SIM card is now being moved from Huawei P30 Pro to Nokia XR20, so guys if you have any questions, or you would like me to test something for you, leave your wishes in the comment section below the post.

I also did an unboxing video and will post it on Nokiamob YouTube and here when I get a bit more time to stitch it up.

Next: Apple to lose $1.14 bln in iPhone sales from Russia pull out