If you know the OtterBox name, it's likely synonymous with protective cases, primarily for phones. The company has started branching out into power accessories, including ones for MagSafe compatible iPhones. The latest accessories are the 5k mAh and 3k mAh Wireless Power Banks for MagSafe.

There are dozens of these power banks on the market that stick onto the back of an iPhone 12 or iPhone 13 and charge them without any cables. Anker makes one; so does Hyper and Apple. It's neat because it's only one small accessory to carry when you need extra power for your iPhone.

This OtterBox Wireless Power Bank comes in two different capacities for times you need more or less battery power in a pinch. I tested the 5k (5,000) mAh version. It also employs the helpful trick of being able to recharge itself using another MagSafe charger.

If you have an iPhone 12 or iPhone 13 and are intrigued by extra battery life without carrying around a cable, a MagSafe battery pack is compelling. Most of them are just standard external batteries with the added feature of a MagSafe compatible magnet array. 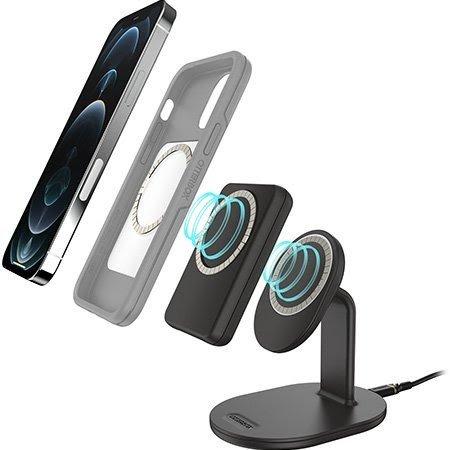 In this case, the OtterBox Wireless Power Bank for MagSafe 5k mAh has one dual-direction USB-C port to recharge it or charge from it. It has LEDs to indicate its power level. It also has wireless output to the phone on one side and wireless input for the power bank on the other side.

The USB-C port on here means it can be used to power any phone or device. So even if you ditch your iPhone in the future, this can still be used as an extra battery. It will charge at 20 watts with a cable.

Be aware that using the MagSafe charging feature will be less speedy. This one will charge wirelessly at 7.5 watt. That's not fast, but it is faster than Apple's MagSafe Battery Pack, which charges wirelessly at 5 watts.

This battery pack should be able to give your iPhone about one full charge. It will be more for an iPhone mini and less for an iPhone Pro Max because their internal battery sizes differ.

In practice, using the OtterBox Wireless Power Bank 5k provides a reliable experience. It adds a large hump to the back of your phone that is bigger than other competing products, but not by much.

The magnetic strength is similar to others, but the bottom portion will definitely slide side to side on the back of the phone if you put it in your pocket. The biggest downside, compared to the Anker, Apple and Hyper, is that the plastic on the OtterBox feels a little cheap, like it might split open if dropped from a countertop. All-in-all, there are not any surprises in how the device works, until you need to recharge the power bank itself.

The OtterBox Wireless Power Bank can be recharged on any MagSafe charger. I used Apple's MagSafe Charger, and I also used OtterBox's Charger Stand for MagSafe. I even recharged the OtterBox battery pack using the Anker battery pack. This really unties the battery pack from needing to keep a cable nearby. It's great because it's exactly what you would expect, or hope for, with a "wireless" product like this.

This OtterBox Wireless Power Bank can also stick to an iPhone and charge another low-power device like AirPods with a cable if need be. Not many people will likely charge other devices off the USB port at the same time, but it's feasible.

Should You Buy the OtterBox Wireless Power Bank for MagSafe?

This Wireless Power Bank for MagSafe isn't the best value compared to similar products, but it is one of the coolest. In terms of functionality, it's also an absolute winner. It can be plopped down on any wireless charger you have around your house to be recharged—no cables necessary. It has a lot of versatility in this way.

The OtterBox Wireless Power Bank 3k mAh and 5k mAh versions work the same way, but have slightly different physical dimensions and vary in how fast they can be recharged themselves. Saving $20 and buying the 3k mAh version may be tempting because of its lower price point, but I think the extra power in the 5k option is worth "splurging" on. Plus, if it eases the decision, Apple charges $99 for its MagSafe Battery Pack and it can't recharge using MagSafe.

Newsweek may earn a commission from links on this page, but we only recommend products we back. We participate in various affiliate marketing programs, which means we may get paid commissions on editorially chosen products purchased through our links to retailer sites.

Next: Microsoft’s new Chromium-based Edge browser rolls out to all Windows 10 users via Windows Update