Home > Samsung > Samsung Galaxy Note 10 Lite vs OnePlus 7T: Is There Even A Competition?

The much-awaited Samsung Galaxy Note 10 Lite has finally made its way to India. Armed with an S-Pen and what seems to be a decent camera system, the phone is aimed at creators who don’t have the resources to splurge over seventy grand on a phone.

Samsung has admittedly done a pretty good job with pricing. The Note 10 Lite starts at INR 38,999 and seems to be a pretty good smartphone, at least on paper. But this aggressive pricing has placed the phone in the neighbourhood of the OnePlus 7T that is arguably the most popular smartphone in this segment.

Although the target audience of both phones doesn’t completely overlap, there definitely exists an audience where these phones might be a part of an “either-or decision”. If you’re one of them, this comparison piece might help you make your decision. Also, stay tuned to our full review of the Samsung Galaxy Note 10 Lite that’s coming soon.

Now, let’s get right into the comparison!

The Note 10 Lite makes use of a glastic (a portmanteau of glass and plastic) back panel that is said to feel premium. The phone comes in three colourways of Aura Black, Aura Red and Aura Glow. The cameras at the back are housed in a rectangular module that looks much better than the circular module that sits behind the OnePlus 7T, at least in my opinion.

The OnePlus 7T, on the other hand, makes use of premium materials and is slapped with frosted glass on the back. The sides are made of aluminium, and the overall phone is likely to feel more premium than the Note 10 Lite. The 7T is available in Grey and Blue. Owing to the smaller screen size, the OnePlus 7T is slightly lighter and hence handier than the Note 10 Lite.

The Note 10 Lite has a humongous 6.7-inch HDR-enabled FullHD+ AMOLED panel with a 20:9 aspect ratio. The display is free of any notches and instead uses a hole-punch setup instead. The bezels too, are quite minimal that makes way for an engaging viewing experience.

The OnePlus 7T has a slightly smaller 6.5-inch display that is HDR10+ certified and has a layer of Gorilla Glass 5 on top for additional protection. The display pushes a FullHD+ resolution and has a refresh rate of 90Hz, the latter of which is missing on the Note 10 Lite. 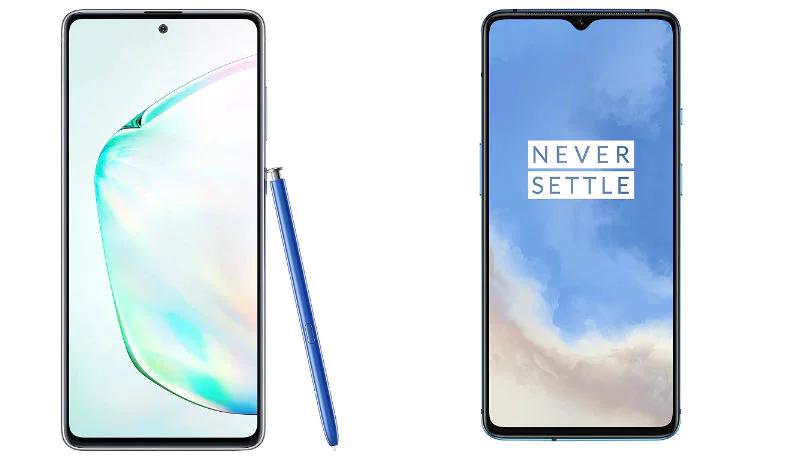 SEE ALSO: Samsung Is Pumping In $500 Million To Start Its Own Display Manufacturing Plant In India

This is where things go lop-sided. The Note 10 Lite makes use of the Samsung Exynos 9810 processor that was found on the Samsung Galaxy S9 series and the Note 9. Being a 2-year old chip, it doesn’t bring the gaming prowess that OnePlus’s Snapdragon 855+ brings to the table. The Snapdragon 855+ is not only more powerful but is also more efficient.

All said and done, the Exynos 9810 isn’t a terrible chip. The 9810 is pretty respectable in terms of performance and can be expected to play games like Call of Duty and Asphalt 9 without breaking sweat. The only question that remains here is how it performs in the longer run.

The Samsung Galaxy Note 10 Lite has a triple-camera setup that consists of a 12MP wide camera (with OIS), a 12MP ultrawide camera and a 12MP telephoto camera. The front camera is a 32MP shooter with support for portrait mode amongst other features. The primary camera setup supports Super Steady for stable video output and Live Focus Video to take portrait videos.

The OnePlus 7T has a triple camera setup that consists of a 48MP main camera with optical image stabilization (OIS), a 12MP 2x telephoto sensor, and a 16MP ultrawide sensor. The front shooter is a 16MP sensor with support for portrait mode.

The Note 10 Lite runs on Android 10 out of the box and comes with One UI 2.0 on top. As we’ve seen, One UI 2.0 does a wonderful job of offering a bevvy of features without making the user experience feel bloated. The user experience is quite intuitive too and is made keeping reachability in mind.

The OnePlus 7T runs on what is probably the most liked Android skin, OxygenOS. OnePlus keeps it clean with the software and hides features under layers that can and will only be accessed by users if they really need it. The phone runs on Android 10 and comes with the assurance of regular security and Android updates.

The Note 10 Lite has a 4,500mAh battery unit that should be good enough to last a day. The phone also supports 18W fast charging. The OnePlus 7T, on the other hand, has a smaller 3,800mAh battery. But it’s good enough for a day’s use. Also, the 7T is extremely quick at being juiced up, thanks to its 30W Warp Charge tech.

The Samsung Galaxy Note 10 Lite’s USP is the S-Pen that sits inside it. The S-Pen can additionally be used to control media with the help of Air Commands. Additonally, the Note 10 Lite also has a 3.5mm headphone jack that the OnePlus 7T misses out on.

The OnePlus 7T although doesn’t have an IP certification, is said to be dunkable in water. At the least, it’s safe from rain or splashes. The Note 10 Lite doesn’t have any IP rating though.

Which one should you get?

Well, the answer depends on you. The Galaxy Note 10 Lite’s existence revolves around the S-Pen. If the S-Pen is something you could find handy, then the Note 10 Lite might prove to be the better choice for you. Couple the huge AMOLED panel and a beefy battery, it’ll be an ideal phone to binge watch shows on too.

But if you’re not a huge fan of the S-Pen, it’s very difficult to go wrong with the OnePlus 7T too. The phone offers excellent performance, a 90Hz display, a great software experience and a dependable set of cameras.

Stay tuned for our full review of the Samsung Galaxy Note 10 Lite to see how the phone performs.