With the launch of Samsung’s Galaxy Tab S8 series, you might be wondering whether to splash out on the Samsung Galaxy Tab S8 Plus or go for Apple’s iPad Air 4 instead. Although the decision might ultimately come down to whether you prefer Android or iOS, there are plenty of other factors to consider, too. We’ve done the hard work for you and compared the Samsung Galaxy Tab S8 Plus against the Apple iPad Air 4 across six core categories — from design and display to battery life and special features — and crowned an overall winner. Which tablet is the one for you? Keep reading to find out.

The iPad Air 4 is practically identical to the iPad Pro, with a flat metal back and sides. Weighing just 458 grams, it’s incredibly lightweight and feels comfortable to hold one-handed. Its Touch ID fingerprint sensor is integrated into the tablet’s power button. In contrast, the Galaxy Tab S8 Plus boasts a similar elegant design to its predecessor, the Tab S7 Plus, but, at 567 grams, feels quite a bit heavier than the iPad Air, definitely something to consider if you’re looking to use the tablet with one hand — though it’s still not a beast. Its metal unibody feels solid, with the fingerprint scanner built into the power button on the side. There’s a handy spot on the back to dock the S Pen, too.

Over to those displays: The iPad Air’s 10.9-inch Liquid Retina Display packs in a 2360 x 1640 resolution, with 440 nits of brightness and a 60Hz refresh rate, plus TrueTone color adjustment, so everything you view, from photos to videos, looks stunning. The laminated screen isn’t quite as reflective as other tablets, so you shouldn’t run into any issues using it indoors or out, even in direct sunlight.

The Galaxy Tab S8 Plus, on the other hand, has a larger 12.4-inch Super AMOLED screen with 2800 x 1752 resolution, 420 nits of brightness, and a 120Hz refresh rate. Though you probably won’t notice much difference from that higher refresh rate most of the time, it comes into its own when you’re playing the latest games, and toggling it on and off should ensure the difference is noticeable when you’re scrolling, too. One caveat: The Tab S8’s screen is much more reflective compared to the iPad’s, which can be irritating when you’re looking at dark photos or watching dark videos and find yourself gazing at your own reflection.

The iPad Air comes in a rainbow array of colors including silver, Space Gray, Rose Gold, green, and Sky Blue. You have fewer choices on offer with the Tab S8 Plus — Graphite, silver, or Pink Gold — but all three are sleek and eye-catching. Neither of these tablets has an IP rating, so we wouldn’t recommend packing either for a day at the beach.

This round was very close to call, but the Tab S8 Plus just comes out ahead thanks to its slightly larger, higher resolution display, that 120Hz refresh rate, and the inclusion of the S Pen for sketching or taking notes. That said, if you prefer a smaller, lighter tablet for one-handed use, the iPad Air might be the better choice for you.

Under the hood, the Galaxy Tab S8 Plus boasts Samsung’s latest chip and the most powerful processor currently available for Android devices, the Snapdragon 8 Gen 1, paired with 8GB of RAM. In contrast, the iPad Air 4 packs Apple’s A14 Bionic chip, and while the two processors offer similar performance, the Snapdragon chip just has the edge when it comes to benchmarks, though that’s to be expected as it’s newer. In everyday use, you’ll be hard pushed to spot any difference, though if you plan to play the latest demanding games, the Tab S8 Plus may be the superior choice. Apps launch quickly, and most games run well across both tablets.

When it comes to storage, you get a choice of 128GB or 256GB onboard the Galaxy Tab S8 Plus compared to 64GB or 256GB on the iPad Air 4. That missing 128GB option on the iPad might push some buyers toward Samsung’s tablet, especially when you consider the iPad Air doesn’t have expandable storage. With the Tab S8 Plus, you can add a microSD card to expand the storage to 1TB, though 256GB of storage should be more than enough for most.

Samsung’s packed a hefty 10,090mAh battery into the Tab S8, promising all-day battery life, though we’ll need to spend some more time with the tablet to see if that holds up. Bear in mind that enabling the 120Hz refresh rate might make a dent in battery life, too. In contrast, the iPad Air 4 should give you around 10 hours of battery life on Wi-Fi (9 hours on cellular), but battery life barely takes a hit when the tablet’s not in use, and that 60Hz refresh rate should also boost battery economy.

The iPad Air 4 has a USB-C port, so you can use your MacBook cable for charging, and you get a 20W USB-C charging brick in the box. The Tab S8 Plus also has a USB-C port and supports 45W fast charging, but there’s no charger included in the box, so you’ll need to buy this separately.

Though we’d love to call this round a tie, the Tab S8 Plus’ powerful Snapdragon 8 Gen 1 chip, that 128GB storage option (and expandable storage), all-day battery life, and 45W wired fast charging just takes the Galaxy Tab S8 Plus into the lead here, even with the missing charging brick.

Nobody really buys a tablet for its cameras, but as more of us work from home these days, that front-facing camera is becoming increasingly important. The Tab S8 Plus packs a 12MP front camera, a decent upgrade over the Tab S7 Plus’s 8MP selfie camera. Samsung has also included a new auto-framing feature, designed to keep you in focus during video calls. On the back, you get a fairly standard 13MP main and 6MP ultrawide sensor. 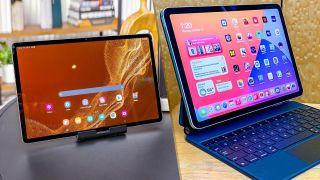 The cameras on both tablets are pretty standard, and we’d be hard pushed to pick between the two, with both offering image stabilization and auto-framing on the selfie camera.

The Galaxy Tab S8 Plus ships with Android 12 and Samsung’s OneUI 4.0, which might not feel quite as intuitive as Apple’s ecosystem to some. The iPad Air 4 runs iPadOS 15, with Apple promising software updates to devices for several years — which may be an understatement, as the iPad Air 2 received almost seven years of software updates. Samsung promises four years of Android updates and five years of security updates, which is probably the best update policy around when it comes to Android tablets.

If you’re planning to use your tablet as a laptop, Samsung’s DeX mode is a treat, enabling you to hook up a compatible TV as a screen. With DeX mode, everything looks a lot like a Windows desktop, and apps don’t have to take up the whole screen, as windowed mode makes multitasking a breeze. You will find, though, that not all apps work with DeX.

With Samsung’s latest updates promise, it’s looking like either of these tablets is an excellent future-proof choice for those concerned about longevity. We’ll call this round a tie, as ultimately it may come down to whether you prefer Android or iOS.

Both the Galaxy Tab S8 Plus and the iPad Air pack a range of special features. The Galaxy Tab S8 Plus comes with the S Pen, which docks magnetically to the rear of the tablet. The iPad Air 4 supports the 2nd-generation Apple Pencil, which docks magnetically to the side of the device for charging. The S Pen is included with the Tab S8 Plus, but if you’re going for the iPad Air 4, you’ll need to pick up an Apple Pencil separately, with a 2nd-gen one costing around $129.

The latest S Pen’s side button makes it easy to perform gestures to control actions on the tablet, though it’s not particularly intuitive to use. It uses a prediction algorithm for ultra-low latency compared to previous S Pens, and Samsung claims it feels just like putting pen to paper and makes it great for sketching or taking notes. Samsung has also partnered with Clip Studio Paint, allowing you to use your S Pen as a paintbrush and your smartphone as a digital color palette — you can choose between hundreds of tools and brush options, even picking real-world colors from photos taken on your Galaxy phone.

The 2nd-gen Apple Pencil boasts some great improvements over the 1st-gen, including a smaller size and matte texture, and it feels more comfortable to hold, too. The QuickNote feature lets you easily create a note with handwriting, links, Safari highlights, tags, and mentions — and you can start a Quick Note by swiping your Apple Pencil up from the corner of the screen, great if you need to jot something down in a hurry. There’s also support for Apple’s Magic Keyboard, which you can grab from Apple for $299.

Samsung’s Book Cover Keyboard is a must for those using DeX mode and will set you back $230 for the classic version or $160 for the Slim version — although with some pre-orders at Samsung, you’ll get the Slim one thrown in for free. We haven’t spent any time with this accessory, although Samsung’s keyboard covers in the past haven’t been quite as reliable or sturdy as Apple’s Magic Keyboard, and the trackpad has felt slightly jumpy. There are plenty of third-party options available, too, if you need a keyboard for the Galaxy Tab S8 Plus.

It’s too difficult for us to pick a winner this round, as which device you choose will depend on your available budget, preferences, and how you plan to use your tablet.

You can pre-order the Galaxy Tab S8 Plus from Samsung for $900 for the 128GB model (Wi-Fi) or $1,100 for the 128GB model (5G on Verizon). You can also pick up the 256GB model (Wi-Fi) for $980. The 5G version with AT&T or T-Mobile will be available soon. Pre-orders will arrive in April, depending on which version you order. Samsung is also offering a free Slim Keyboard Cover with all pre-orders and up to $600 trade-in credit.

The Samsung Galaxy Tab S8 Plus and the iPad Air 4 have plenty in common, but they’re different beasts too. While the iPad impresses with its sleek design, powerful A14 Bionic chip and all-day battery life, there are some areas where the Tab S8 Plus comes out ahead. For a start, you’ll need to invest in the Apple Pencil separately, as there’s no stylus included with the iPad, which is something worth considering if you’re going to be sketching or taking notes a lot. With the Tab S8 Plus, you get the S Pen included.

The Tab S8 Plus also has a beefier battery, a newer chip, 120Hz refresh rate, faster 45W charging, and expandable storage, not to mention DeX mode if you want to use your tablet as a laptop. With that said, if you do decide to go for the iPad Air 4, you’re still getting a fantastic tablet that’s capable of handling the latest games, multitasking, and more. Ultimately, this decision may come down to which features are most important to you, and whether you prefer Android or iOS.

If neither of these devices seems quite right for you, why not check out our best tablets for 2022 to find your next tablet?

Next: Analysis of the Pixel 6 in depth and opinion