In addition to the next-generation foldable screen with a new shape, Samsung is also committed to developing much more flexibility. The South Korean company said that as part of its latest breakthrough, it has developed an OLED skin display with a built-in heartbeat monitor that can stretch up to 30%.

According to Samsung, the early-stage tech provides more accurate measurements than existing wearables for longer periods of time. Notably, the electronics giant is convinced that its trials can pave the way for the commercialization of stretchable devices with large, high resolution screens —which it expects to crop up in all manner of healthcare products.

As detailed in a new peer-reviewed study in the journal Science Advances, a team of researchers from the Samsung Advanced Institute of Technology (SAIT), the company's R&D hub, have created a wearable with a flexible screen that provides stable measurements even after being stretched 1,000 times.

As you'd expect, most fixed-form devices typically break down or fall apart under such an intense amount of physical manipulation. To overcome that technical hurdle, the researchers replaced the plastic material used in existing stretchable displays with elastomer — an advanced material with high elasticity and resilience. They then tweaked its molecular composition in order to boost its resistance to heat and to alleviate the stress caused by elongation, allowing them to integr 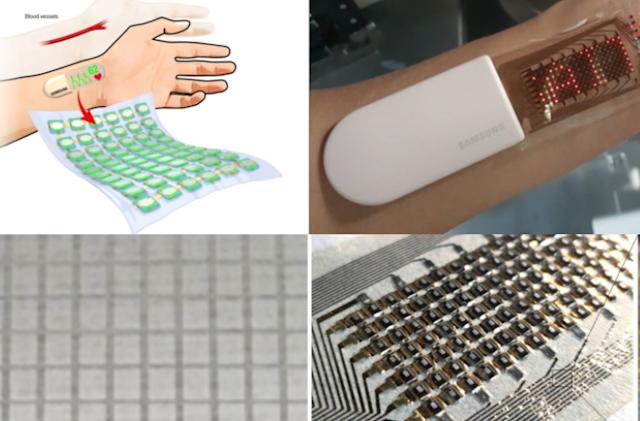 ate a semiconductor into their gadget.

The team also applied a stretchable electrode material (cracked metal) that resists deformation to the elastomer area. According to researcher Yeongjun Lee, this "allowed the spaces and wiring electrodes between the pixels to stretch and shrink without the OLED pixels themselves becoming deformed."

By making the elastomer more resistant to chemicals and heat, the team say they've effectively demonstrated that stretchable devices can be fitted with health-tracking sensors and semiconductors — similar to the ones found inside current wearables like the Apple Watch.

Going one better, they claim their flexible device adapts better to movement by fixing to the wearer's skin. This makes continuous heartbeat measurements possible with a greater degree of sensitivity. During their trials, they found that wrist movement didn't cause any deterioration to performance, even as the device was stretched by up to 30 percent. And, despite the activity, it apparently managed to pick up a heartbeat signal that was 2.4 times stronger compared to a fixed silicon sensor.

Currently, the team is returning to the laboratory to improve the resolution, flexibility and tracking accuracy of the technology to a level suitable for mass production. In the future, they expect that flexible displays will be used to monitor peripheral blood oxygen saturation, electromyogram readings and blood pressure.

Next: Apple opened an affiliate program before the launch of podcast subscriptions