More than any previous installment, FIFA 22 is a game where you can put together an incredible team for relatively few coins. If you had told us that players like Bruno Fernandes would be under 40k within two months of release, we wouldn’t have believed you, but here we are! The accessibility of strong players in Ultimate Team means it is more practical than usual to put most of your coins into a superstar because the supporting cast can be cheap and still effective. Here are some of the cards that overperform their stats without breaking the bank. If you need some more FUT coins, we have some crucial advice for that.

AC Milan lost Gianluigi Donnarumma to PSG in the summer (and he’s probably the best goalkeeper in FIFA 22 if you have the funds), but they picked up an excellent replacement in Mike Maignan, who is available for a couple of thousand FUT coins. Tall, fast and quick off his line, Maignan also has great chemistry links to many excellent French defenders.

If you’re looking for a heavyweight Premier League centre-back and can’t afford Van Dijk or Varane, you could do a lot worse than turn to Cristian Romero. Spurs have had a dreadful start to the season but Romero was still an excellent signing, and this in-form card has great pace and 90+ in every defensive stat with a Shadow Chemistry Style applied. Amazing value for under 20k. 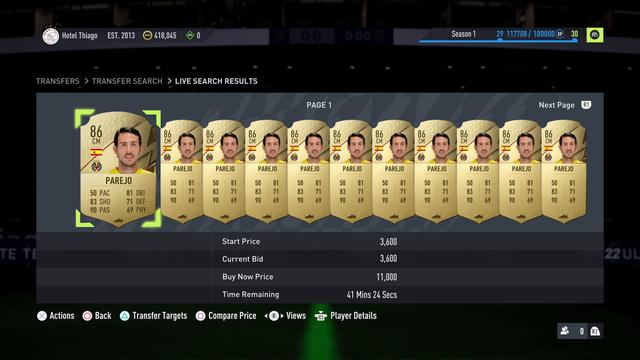 Every FIFA has a go-to early-game midfielder and Aurélien Tchouaméni’s in-form definitely fits the bill. Excellent as a box-to-box or defensive midfielder, and tall enough to win any headers sent his way, he also has the chemistry links everyone ends up needing due to the high volume of strong French players in FUT.

Kevin de Bruyne is a better option for the still stunningly low 70k, but the fact this Bruno card is half the price is absolutely wild considering what he offers. Whether he drops deep and does defensive work or just sits behind the striker doing CAM things, Bruno is luxury player available for beer money. His free kick and penalty skills shouldn’t be overlooked either.

When EA brought out Frenkie’s Road to the Knockouts Champions League card, the price of his basic Rare Gold inevitably tanked, and while that’s bad news for anyone who got him early, it means the rest of us can pick up possibly the best pure box-to-box midfielder in the game for around 40k. Marcos Llorente is another superb option here for 60k, but Frenkie’s superior dribbling and passing mean he feels better in creative areas.

The fact that Renato Sanches’ base card is available for under 1000 coins is mind-boggling considering the impact he can have. Four-star skills and weak foot, tons of useful traits, and solid all-round CM stats that he seems to outperform anyway, make this possibly the best-value card in the whole of FUT. The inevitable special cards he gets later in the cycle will be instant hits, but those really will break the bank.

If you have the coins, then Nicolò Barella’s in-form card is hands-down the best defensive midfield option in Serie A, but Kessié will do a fantastic job in the meantime for a fraction of the cost. One of those players you can install in the team and just forget about for the next few weeks, Kessié has close to maximum Interceptions and Defensive Awareness with a Shadow on him.

He’s the most expensive card on this list by far at 80k, but it’s fun to check out the new Hero cards and this one is flying under the radar a little. Four-star skills and that all-important five-star weak foot are the first clues to his usefulness, but the Russian hero with LaLiga links moves into premium performance territory with Hunter or Shadow cards applied. Hunter turns him into a superb CAM or second striker and Shadow makes for a very viable CM or even CDM as part of a duo.

Adama is one of those cards that has a tangible aura. His outrageous pace means that he can come on as a sub in the middle of the second half and devastate tiring defences, and while he offers very little besides pure pace, his reputation precedes him, so his introduction can get into an opponent’s head, allowing you to take advantage as a game becomes stretched. He costs under 1000 coins.

It’s been a strange couple of years for Timo. Arriving with much fanfare at Chelsea after a scintillating period in the Bundesliga, he flopped in the Premier League, then led the line as Chelsea won the Champions League, then saw his bosses buy Romelu Lukaku essentially to replace him. It must be a bit head-spinning. Whatever anyone else thinks though, the FUT meta loves him, and at under 5k, his Rare Gold card is a dependable striker who will score plenty of goals and leave defenders for dust on breakaways.

Perpetually linked with a move away from Napoli to the Premier League, Lozano might be better placed to stay where he is and enjoy the environment that has reliably brought him multiple in-forms and special cards in each of the last few years in FUT. This early in-form is another great example, with excellent base pace, four-star skills and the Outside Foot Shot trait to offset the limitation of his three-star weak foot. The perfect super sub at under 15k, and that price will rise in the coming months as TOTWs are demanded for more desirable SBCs.

Written by Tom Bramwell on behalf of GLHF.

Next: Nissan Will Sell Its New Electric SUV for $40-60K