A bit late to the game, OtterBox just launched its first MagSafe-compatible Power Bank. Waiting for other manufactures to show their hands first, the new release arrives with a first of its kind feature set centered around its passthrough MagSafe charging. But was it worth the wait? Our latestTested with 9to5Toys review explores what to expect.

You’re reading Tested with 9to5Toys, where we explore everyday tech essentials that make life a bit easier. Browse through our entire guide for all of the latest reviews, and sound off in the comments below if there’s something you’d like to see featured.

Having just launched back in February, the new OtterBox MagSafe Power Bank arrives as the brand’s first entry into the product market. Packed into the same rugged housing you’ll find in its popular iPhone cases, its latest accessory brings with it a 5,000mAh internal battery alongside 7.5W charging speeds.

Most notably for the new release is its MagSafe charging features. This allows you to not only top off your iPhone 12 or 13 series handset with the power bank, but also dock it on another MagSafe charger when it comes time to refuel. But does that feature justify the$70 price tag? Let’s take a closer look. 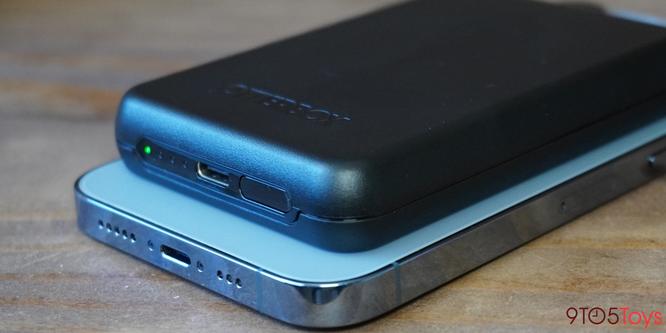 Here’s a closer look at the spec sheet:

After unboxing the new OtterBox MagSafe Power Bank earlier this week and using it for the past few days, I can tell you there is a lot to like, but there are some downsides to consider. Right off the bat, it’s worth mentioning the build, which is likely going to be one of the big grievances people have with the accessory.

In typical OtterBox fashion, the power bank is coated in its usual rugged plastic housing. It doesn’t feel cheap or anything, but it’s a far cry from the more premium materials used on the likes of Apple’s official model or even solutions from Anker. It has a little bit of texture that adds some grip, but the shell is really about as minimal as it gets. Though the features are where it really matters.

There’s pretty standard stuff in the 7.5W charging output from the internal 5,000mAh battery. But the real star of the show are the charging capabilities packed into the OtterBox MagSafe Power Bank. This allows you to top off the power bank by docking it in your existing MagSafe charging station to supplement the USB-C port. It can even continue charging your iPhone 13 while it tops itself back up, letting you stack accessories. That same onboard USB-C port can also be used for charging up a second device, too.

In actual use, the OtterBox MagSafe Power Bank does a really solid job but ultimately isn’t perfect. The MagSafe passthrough is super convenient even if it isn’t the quickest route for refueling in a pinch. I’ve been using it more for setting and forgetting it on the charger, and anyone who values a streamlined travel setup will certainly appreciate having to bring one less cable. The 5000mAh capacity has proved to be enough juice to get most of an iPhone 13 charge back, but the whole package does heat up a bit as we’ve found with most other MagSafe power banks on the market.

The biggest area of improvement for me would be the actual magnets built into the package. There is more than enough holding power to keep things in place, it’s just a little less sturdy than some other models out there. It’s a weird thing to note, but the secondary magnet that keeps the power bank from swiveling isn’t quite as strong as the rest and is a bit awkward sometimes in the hand. But like I said, it’s not quite flawless.

For those few aspects that don’t quite stack up as well as the rest, I have to say I am impressed by the package. While others put much more of the focus into the form, OtterBox goes heavy on the function and the final result is much more versatile, even if it isn’t as sleek or colorful as alternatives. At this point, most iPhone 12 or 13 series owners likely have a MagSafe power bank in their arsenal – at least those who want one in the first place. I have quite a few at this point and have to say that OtterBox has managed to leapfrog the competition and deliver an offering worth checking into; even if you already have one.

Sure, the design may leave a little up to the imagination, but the MagSafe passthrough charging is a really useful inclusion. It’s something that I hope to see from the competition moving forward as it’s just too good to not become a standard feature. So until another version comes around, the new OtterBox MagSafe Power Bank is one of the best options for your cash.

FTC: 9to5Toys is reader supported, we may earn income on affiliate links

Prev: The best laptops for battery life in 2022