Vivo V17 Pro is the latest launch from the BBK Electronics-owned company. Coming as a successor to theVivo V15 Pro, the V17 Pro had some shoes to fill, especially in the unique features segment. To recall, the V15 Pro was the first smartphone under Rs 30,000 to feature a pop-up selfie camera and the phone impressed many in the offline segment despite sporting a higher price tag. With the V17 Pro, the company has taken things a notch up in many ways; It’s the first smartphone in the industry to come with dual cameras located in the pop-up selfie camera and the phone also sports four cameras on the rear side- and they’re the USP of this smartphone. Vivo has retained the same chipset as the V15 Pro, but the design, battery and especially cameras have been upgraded on the V17 Pro. Here are the few things which we liked on the V17 Pro during our usage.

Things We Liked on the Vivo V17 Pro

First of all, the design and display of theVivo V17 Pro. The design of the V17 Pro is a major upgrade compared to the V15 Pro because the latest smartphone has a glass back whereas its predecessor featured a polycarbonate back panel. The in-hand feel of the V17 Pro is much better and the form factor is also something very new. The V17 Pro has a 6.44-inch Full HD+ Super AMOLED display on the front with an aspect ratio of 20:9. Yes, it’s not the older 19.5:9 aspect ratio we found on other phones with a full-screen display and it’s an all-new 20:9 aspect ratio. The difference is very minor and some may not even notice it, but we loved the overall form factor of the V17 Pro.

The display on the V17 Pro is also an excellent AMOLED display and the in-display fingerprint scanner has been upgraded to the latest generation as well. The phone has a single bottom-firing speaker and it gets pretty loud to fill a whole room. It’s great to see the phone delivering strong loudspeaker even with a single one.

Next up, we have the cameras on theVivo V17 Pro. The phone features a quad camera setup on the back comprising of primary 48MP Sony IMX586 shooter, 13MP telephoto shooter, 13MP ultra-wide-angle lens and 2MP macro sensor for shooting close up shots. Firstly, it’s good to see Vivo going for a dedicated telephoto lens on the V17 Pro as most smartphones coming out these days ship with a dedicated depth sensor instead of a telephoto lens. 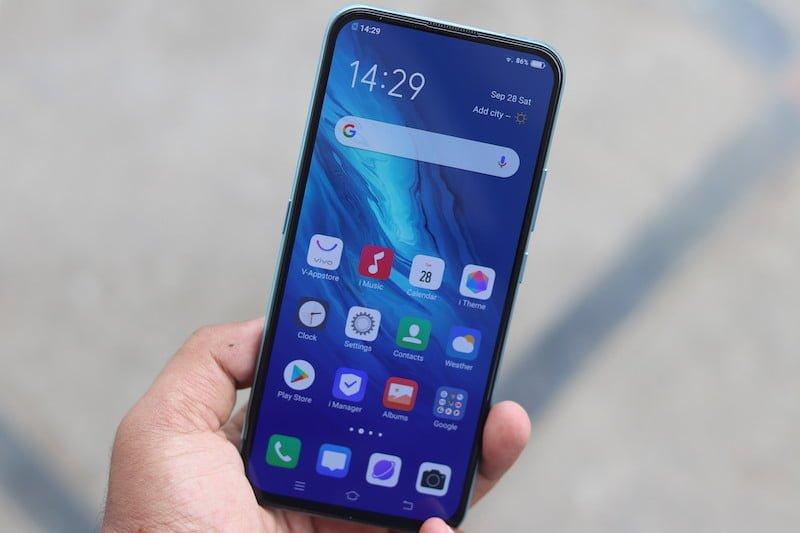 As for the daylight images, they come out good with tons of details and accurate colours and dynamic range is on point as well. Turning on the HDR mode will yield images with even better dynamic range. The phone has a dedicated ultra-wide and telephoto shooters which serve their purpose as well. The ultra-wide-angle shooter is a 16MP unit and it also captures images with a good amount of details. There’s a Super Macro mode as well which helps in capturing close-up shots of flowers. Here are some of the camera samples shot on the Vivo V17 Pro.

Lastly, we have the battery life. The V17 Pro has a 4100mAh battery unit underneath and combined with the FunTouch OS 9.1, the phone delivers more than a day’s worth of battery life with ease. The phone also features the Qualcomm Snapdragon 675 Mobile Platform which is power-efficient as well.

The phone also features a 3.5mm headphone jack and it’s the first Vivo V series phone to ship with a USB Type-C port which is a welcome change.

Things We Did Not Like on the Vivo V17 Pro

Another disappointing thing with theVivo V17 Pro is the processor. The phone comes powered by the Snapdragon 675 chipset which is the same chipset we get on the Vivo V15 Pro as well. It’s not a bad chipset at all, but considering the price tag of the V17 Pro, the company should’ve at least gone with a Snapdragon 730 or 730G chipset.

Lastly, we have the pricing of the smartphone. The Vivo V17 Pro comes in a single variant with 8GB of RAM and 128GB of internal storage and it retails for Rs 29,990. We understand that the V17 Pro is an offline-centric smartphone and the company will sell a lot of units with its marketing strategy.

Surely, the Vivo V17 Pro has a lot of positives- the cameras, the build quality, the display, the in-display fingerprint scanners, but the major con for the device is the pricing and under Rs 20,000 processor.