Home > HUAWEI > Galaxy S22 Plus vs OnePlus 10 Pro: Which should you buy?
CONTENTS CLOSE

Samsung's trio of flagship devices for 2022 is here. The new Galaxy S22 lineup contains Galaxy S22, S22 Plus, and the S22 Ultra. Even though on the surface they look like just refined versions of their predecessors, they're much more. S22 Plus, especially, looks like a solid Android flagship. Another outstanding flagship is the OnePlus 10 Pro, which will soon be available in the United States and other global markets.

If you're confused about which one to buy, don't look anywhere else. In this article, we are going to go over how the Galaxy S22 Plus and the OnePlus 10 Pro differ from each other by breaking down their hardware specifications to help you make a decision.

Galaxy S22 Plus vs OnePlus 10 Pro: Design and Display

The design of the Samsung Galaxy S22 Plus is nothing new. It carries the Contour Cut design wherein the camera module still flows over the devices’ left edge and blends seamlessly with the frame. The back is made out of Corning's Gorilla Glass Victus+ which has been given a haze finish. Overall, the smartphone now looks more modern, fashionable, and sleek.

In fact, the OnePlus 10 Pro has a design inspired by the Samsung Galaxy S21 series. For the first time in a OnePlus device, the camera bump seamlessly melts into the frame like the S21 series. The camera module also features the sleek Hasselblad branding on the side. It will come in two colors:Volcanic Black and a green hue finish called Emerald Forest. While the black color has been given a sandstone-like finish, the green variant comes in a haze finish.

Moving on to the front of the two devices, both the Android flagships come with fantastic displays. The Samsung Galaxy S22 Plus features a Dynamic AMOLED 6.6-inch display that boasts an FHD+ resolution (1080 x 2340 pixels) with an adaptive 120Hz refresh rate. One of the distinguishing features of the S22 Plus' display is the peak brightness. Samsung says the brightness of the S22 Plus' display can go up to 1,750 nits — best in all smartphones.

On the other hand, the OnePlus 10 Pro comes with a 6.7-inch second-generation LTPO OLED display that also supports a 120Hz adaptive refresh rate. While OnePlus hasn't mentioned a lot about the display — we'll get to know more in the coming days — the smartphone does feature Dual Color Calibration in which the panel is color accurate and calibrated to show natural colors. 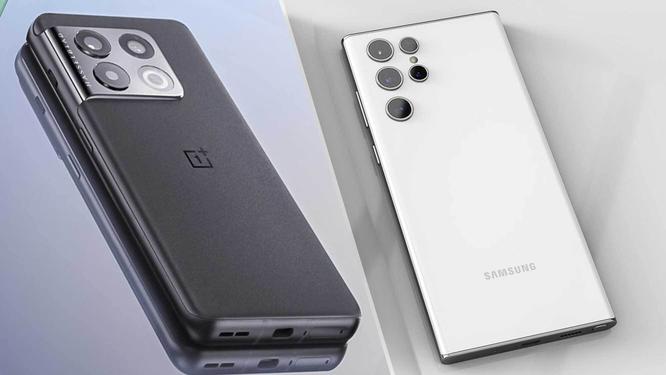 What processor do these devices feature?

Like previous generation Samsung Galaxy smartphones, Galaxy S22 Plus also ships with two different chipsets: Exynos 2200 and Qualcomm Snapdragon 8 Gen1. Regions like India, South Africa, North America, South Korea, and the UAE are set to receive the Qualcomm variants of the S22 Plus whereas Europe is expected to receive Exynos 2200 variant. You can learn more about the region-specific variants here.

The performance of the Snapdragon 8 Gen1 smartphones — both the OnePlus 10 Pro and Samsung Galaxy S22 Plus — is almost the same. You won't see hiccups in day-to-day usage. Exynos 2200, which ships with the Xclipse GPU, is a result of the collaboration between Samsung and AMD. It's a 4nm node process-based chipset that is designed on the latest ARM v9 architecture. Both processors in their initial coverage have proven to be good performers, and you won't face much of an issue.

If you're a normal user, you aren't likely to notice any performance difference between the Galaxy S22 Plus and the OnePlus 10 Pro. Both phones will run games and apps at their maximum settings. Frequent switching between apps and multitasking will also be a breeze.

Samsung Galaxy S22 Plus features a triple camera setup. This includes a 50MP main wide-angle camera, a 10MP telelens, and a 12MP ultra-wide lens. The main 50MP camera of the device comes with features like Dual Pixel autofocus, Optical Image Stabilization, and an 85-degree field of view. The 10MP telephoto lens features 3x optical zoom while the ultra-wide camera boasts a field of view of 120-degree. Samsung has added tons of features to the Samsung Galaxy S22 Plus' camera and you can learn more about them here.

On the other hand, the OnePlus 10 Pro also comes with a triple camera setup containing a 48MP primary, a 50MP ultrawide, and an 8MP telephoto sensor. This year's OnePlus flagship also comes with Hasselblad branding and the company says it has benefitted from the partnership as the 10 Pro captures more natural colors now. The company has also added new features like Movie Mode and 12-bit RAW capture. Learn more about the OnePlus 10 Pro and its camera features here.

You just can't beat OnePlus when it comes to battery and charging, can you? OnePlus builds on its excellent charging tech, and the OnePlus 10 Pro comes with support for 80W fast wired charging. In addition, the OnePlus 10 Pro also supports wireless charging at 50W, albeit using the company's proprietary charger and not Qi wireless charging. The smartphone comes with a 5,000 mAh cell that OnePlus says can be fully filled in just 32 minutes using the in-box 80W SuperVOOC charger.

Samsung, on the other hand, has reduced the battery capacity on the Plus model and the S22 Plus only comes with a 4,500 mAh battery cell. Though we still believe the device will last you through a day of use, it's inferior in comparison to the OnePlus 10 Pro. Thankfully, the S22 Plus supports 45W fast wired charging so it won't take much longer to fill that battery.

The Galaxy S22 Plus is the latest flagship smartphone from Samsung. It comes with a powerful chipset, a large 6.6-inch AMOLED display with a 120Hz refresh rate, a 50MP primary camera, and much more. Check out all the deals on the device using the link given below!

The Oneplus 10 Pro features all-around upgrades making the device the best option available from OnePlus. If you're looking for a phone that will not leave out an ounce of performance and has the latest bells and whistles, this is the device to get.