The OnePlus 10 Pro received a launch unlike any of the brand’s other devices when it was revealed as a Chinese exclusive in January. But now OnePlus is gearing up to launch its highly-anticipated flagship in Europe.

While no UK price (or even a firm release date) has been confirmed yet, MWC 2022 is the first time OnePlus is showing off a European version of the phone.

It’s also the first time I have got my hands on the device – so should this be an Android phone to look out for this year?

The OnePlus 10 Pro has been available in China since early 2022, and in that time the phone has made quite a splash – though not always for the right reason. Recently, the YouTube channel JerryRigEverything attempted (and succeeded) in snapping the phone in half after applying what looked like minimal pressure. Hardly ideal advertising for a device that’ll likely cost around the same price as the Samsung Galaxy S22 when it hits UK stores.

While I wasn’t daring enough to attempt my own bend test on the MWC 2022 stand, this was the first time I had held and seen the OnePlus 10 Pro myself. I can’t say I had been too impressed with the images of the phone since release, not least because of the absolutely massive camera housing that takes up the majority of the phone’s rear. 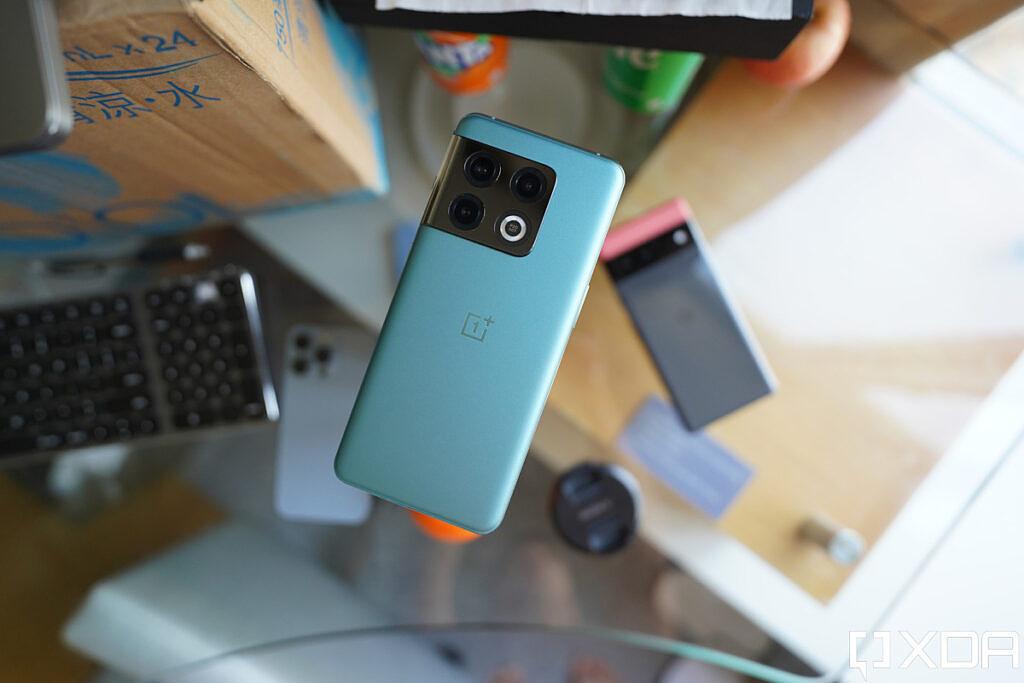 After seeing and holding the phone though I feel my position is softening a little. This isn’t an ugly phone at all, instead it has a number of nice touches dotted about. And while the camera housing remains hefty, it’s not as offensive as I had expected.

The first highlight is the feel of the back. Both the black and green variants have a matte finish, with the green model having a slight texture. It feels nice, and doesn’t get anywhere near as grubby after use as the Oppo Find X5 Pro.

Plump for the black model, or Volcanic Black as OnePlus calls it, and you get a smoother finish and, of course, a camera house that blends in much better.

Speaking of the camera housing, it reminds me a lot of the Samsung Galaxy S21 Ultra. It feels like a part of the design, blending into the side of the phone, rather than just being stuck on. It’s big, and won’t be for everyone, I don’t hate it.

At 200g it’s one of the lighter flagships around – though not as light as the 189g Realme GT2 Pro – and the curved front and back help it sit nicely. It’s big, but then any phone with a 6.7-inch display isn’t going to be small.

The display itself looks like a winner and mirrors a lot of the specs from the Oppo Find X5 Pro. It’s an OLED panel, with LTPO 2.0 tech meaning it can dial down to 1Hz and up to 120Hz. The resolution is sharp at 3216 x 1440 and there’s all the usual HDR support.

OnePlus phones have always impressed when it comes to performance, and I doubt the story will be any different here. At the heart of the phone is a Snapdragon 8 Gen 1 chip, paired with 8 or 12GB RAM and up to 512GB of UFS 3.1 storage.

I only had a short time with the phone (and wasn’t able to run any benchmarks) but it felt as fast as any other 2022 flagship when flipping through home screens and opening apps. I’ll need more time with it to really see how it shapes up to the best phones, though.

Judgements on battery life will have to wait until the full review too. There’s a 5000mAh battery inside, alongside SuperVOOC charging up to 80w and fast wireless charging up to 50w. Even though it’s a big battery, don’t expect it to take long to reach 100%. Oddly, the Chinese version of the device switched out from a USB-C charger to a USB-A version, though whether this remains for the UK model remains to be seen.

I hope that with the huge camera module, the copious amount of Hasselblad branding and the vast array of megapixels on offer that the OnePlus 10 Pro finally puts the brand among the best camera phones out there. In the past they’ve only ever managed to offer good, but far from best in class, camera quality when we’ve tested them.

On paper at least, the OnePlus 10 Pro looks promising in the optics department.

There’s a 48-megapixel wide camera with an f/1.8 lens, a 50MP 150-degree ultrawide and an 8MP telephoto for 3x zoom. You might think there should be a fourth camera too, considering there are four circles on the back, but that last one is taken over by a ring flash.

The Hasselblad partnership again seems to be mainly software-focused, with colour calibrationand an orange shutter button harking back to the iconic brand’s history.

Video tops out at 8K 30fps and there’s a 32MP selfie camera tucked inside a cutout in the display. I haven’t had time to test either’s performance yet, however.

OnePlus has never truly wowed me with its cameras before. This was fine when they were much cheaper, but with the Pixel 6 impressing so much at £599 the field is very crowded and hopefully the OnePlus 10 Pro can compete.

It’s far too early for a definitive verdict, but I am more impressed with the OnePlus 10 Pro now that I’ve actually seen it. Whether that translates to a phone I can recommend you run out and buy remains to be seen.

News, competitions and exclusive offers direct to your inbox.Terms and conditions

You can see a full list of the OnePlus 10 Pro’s specs and how they compare to the older OnePlus 9 Pro in the table below.

Gemma Ryles2 weeks agoA 'hands on review' is our first impression of a product only - it is not a full test and verdict. Our writer must have spent some time with the product to describe an early sense of what it's like to use. We call these 'hands on reviews' to make them visible in search. However these are always unscored and don't give recommendations. Read more about our reviews policy.

An abbreviation for milliampere-hour and a way to express the capacity of batteries, especially smaller ones in phones. In most cases the higher the mAh, the longer the battery will last but this isn’t always the case.

Offering faster download and upload speeds when compared to 4G. Great for game streaming and HDR video playback. Not supported everywhere yet and speeds vary wildly.

Next: Galaxy S22 Plus vs OnePlus 10 Pro: Which should you buy?