The Realme GT 2 Pro dominated Realme's press conference at MWC 2022, when the company launched its brand-new flagship phone series, but spare a thought for its little sibling, the GT 2.

The Realme GT 2 is the real successor to last year's fantastic Realme GT, and while it doesn't have the headline-grabbing features of the Pro, like a microscope camera or 2K display, it's a lot more affordable too.

When we say the Realme GT 2 is a successor to the original version, that's in some ways, but not all. It has a bigger screen, better main camera and bigger battery, but the chipset, charging speed, screen resolution and auxiliary cameras are all the same.

Its key difference is actually its size, as its display is 0.2 inches bigger than on the GT, and in the phone world that's a big jump up. We miss the easily-holdable original GT, but must admit that this new version is better for gaming or streaming content as a result.

Off the back of Realme's MWC press conference, we took the GT 2 for a spin to see what it's like, and if it stacks up to its predecessor and its big sibling.

The Realme GT 2 price is one of its key features, making it a tempting mobile that perches on the fence between low-end and mid-range.

The device costs £399 in the UK - that's the only region we have pricing in so far, but Realme doesn't sell its phones in the US, so we're just waiting on Australian costs.

The Realme GT 2 goes on sale on March 15, a week after its predecessor which hits store shelves on March 8.

Like the Pro, the Realme GT 2 has a novel bio-polymer rear design, created with Japanese designer Naoto Fukasawa, which is meant to emulate the feeling of paper. It's partly successful, and the phone does feel quite pleasant to hold, though this certainly isn't as grippy as the GT's faux leather.

The model we tested had a pleasant green color, and there's also a white one that retains the paper material, as well as blue and black versions which don't.

Otherwise, this is a fairly standard Android phone with a USB-C slot, no 3.5mm headphone jack, a power button on the right edge, a volume rocker on the left one, and a rectangular camera bump on the top-right corner of the back. 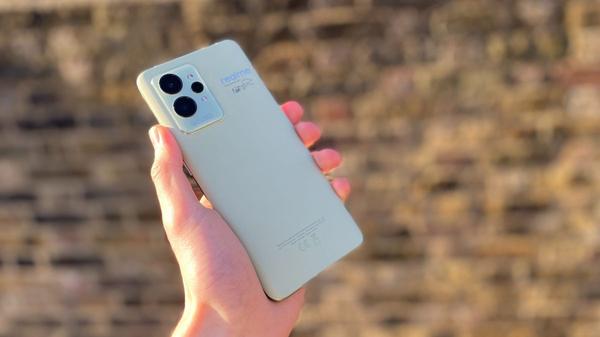 It's a fairly big device, just a touch bigger than what we'd deem comfortable to use, but it's still smaller than the Pro.

That's because the screen is 6.62 inches diagonally, which is a fair amount bigger than the 6.43-inch GT, though the specs are the same. That means it's an AMOLED panel with a FHD+ resolution and 120Hz refresh rate.

It's broken up by a small 'punch-hole' cut-out for the front-facing camera.

These are fairly standard specs for a phone at this price, and it's fit for purpose for gaming, streaming movies and flicking through Insta posts when bored.

That's different from its predecessor as that one had a 64MP main, but given that the new model uses the fantastic Sony IMX766 sensor (which is great for low-light photography) we'd call this an upgrade. It's not as good as the GT 2 Pro though, as instead of a weak macro camera, that has a microscope snapper with 40x magnification which you can read all about here.

From our brief time with the phone, this seems like a capable camera phone given its price, though we admittedly didn't get to test it in low-light settings. Pictures are bright and bold, and selfies in particular looked good.

Realme has taken a leaf from Xiaomi's book recently and debuted lots of photography modes for the camera app - the Realme 9 Pro Plus brought street photography filters and settings, and now there's a Starry Mode which is basically an astrophotography option with an exposure time of nearly five minutes.

The battery here is 5,000mAh, which is nice and big, and we're looking forward to this thing cruising through a full day of use (which hopefully it will do, though we didn't test it for this long).

Charging is 65W, which is the same as the other GT phones, and that's lovely and fast compared to most same-priced phones. The original GT took about half an hour to power from empty to full - we'd expect this one to take a little longer, since its power pack is 500mAh bigger, but not too much more.

One interesting aspect of the Realme GT 2's specs list is the chipset - it uses the Snapdragon 888, which was the powerful Android chip used in flagship phones in 2021 (and the original GT used it), but in 2022 the Snapdragon 8 Gen 1 is the new kid on the block (which the Pro uses).

That slight performance difference will only be noticeable to a tiny fraction of users though, and either way this is a super-powerful Android mobile that should ace all types of games.

Like many new phones, there's a RAM expansion feature here, which lets you temporarily convert unused storage space into RAM, and on the GT 2 this gets you up to 7GB of extra RAM. That should be wonderful for gaming and intensive processes, though if you've owned the mobile for a while and have filled up its storage space, you won't be able to use it anymore.

The software here is Android 12 with Realme UI 3 laid over the top, and this is largely a design overhaul for the user interface. There are a few annoying pre-installed apps like LinkedIn, PUBG Mobile, Booking.com, Amazon Shopping and AliExpress.

Thanks to the RAM, refresh rate and software, navigating the phone felt snappy and quick, and we could jump between apps and menus without having to wait for the device to catch up to our fingers.

The Realme GT 2 seems like a powerful and useful little mobile, based on our brief time using it. Its price certainly makes it a tempting option, especially as that gets you a powerful chipset and capable main camera.

It's not going to steal the piece of our heart that the original GT sits in, as that had a vibrant design and smaller size, but that's more our preference than a general ruling.

We'll need to test out the Realme GT 2 for longer to work out just how worthy it is of your cash, though.

Prev: Nokia T20 is the first tablet from Nokia Mobile