After the truly tiny update that was iOS 15.3, we're now learning about iOS 15.4, and thankfully this already looks to be a much, much bigger update for Apple's operating system.

The first four betas are out now for developers, and with them comes news of several big included features, such as the long-awaited Universal Control, Face ID functionality with a mask, and more.

With rumors of a March event by Apple, it was finally confirmed, with a new Mac and M1 chip, alongside more. but in a press release, the company confirmed that iOS 15.4 was arriving soon.

Below we've detailed everything we know about iOS 15.4, and we'll be updating this article when it arrives.

Cut to the chase

iOS 15.4 is already available, but only in beta form, and only for developers. While you don't technically have to be a developer to grab this version, we'd recommend at least waiting for the public beta, and if you want it to be bug-free then you should wait for the finished release.

We're generally seeing roughly a four to six-week gap between new iOS versions, which means that given iOS 15.3 landed on January 26, we'll probably see the finished version of iOS 15.4 sometime around the March 8 event, which was confirmed.

Apple said in a press release that iOS 15.4 is scheduled to land around the week of March 16.

As for compatibility, it's exactly the same as every other version of iOS 15, meaning that if you're on iOS 15 or above you'll be able to get iOS 15.4 as well. Specifically, that's all handsets from the iPhone 6S onwards, including the iPhone SE (2020) and the original iPhone SE, plus the iPod touch (7th gen).

Thanks to the betas we know many of the features that will probably arrive in iOS 15.4. However, it's possible that there might be other features too, or that some of these won't ultimately make the cut.

Face ID with a mask

The Covid-19 pandemic presented a problem for iPhones, as with the whole world suddenly wearing masks, Face ID wasn't always viable. Apple addressed this problem a while back by allowing your iPhone to unlock if you were wearing an Apple Watch, but with iOS 15.4 it seems to have properly fixed the issue.

The iOS 15.4 beta allows you to set Face ID to work even when you're wearing a mask, by having it just scan the visible parts of your face, such as your eyes. The second beta has also improved this feature slightly, by instructing users how to position their eyes when unlocking the phone. 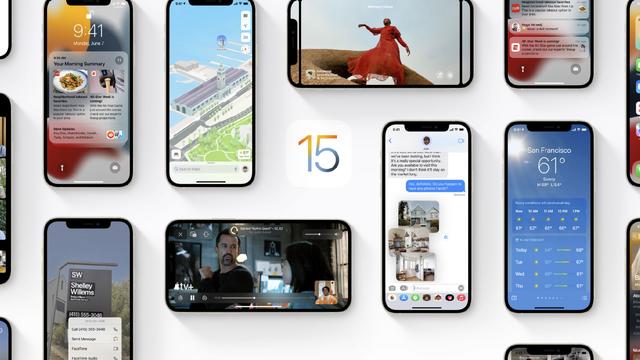 Apple warns that this is less accurate, and we'd assume also less secure, but it's a way to properly use Face ID with a mask on. It's also optional, so if you'd rather keep doing things the current way, you can disable this feature.

Universal Control is technically more of an iPadOS 15.4 feature than an iPhone one, as it allows users to connect an iPad to a Mac and use a single mouse and keyboard across both devices, with the iPad’s display being like an extension of the Mac’s.

This feature has been a long time coming, as we first heard about it back at WWDC 2021, but it's finally arrived in the iPadOS 15.4 beta.

If, somehow, you feel that there just aren't enough emoji yet, then iOS 15.4 could help, as the beta includes 37 new ones, along with 75 skin tone variations for better inclusivity.

New emoji, some of which you can see above, include a biting lip, a melting face, heart hands, and many more.

Apple has a whole range of measures planned to prevent unwanted AirTag tracking, and the first of those have arrived in an iOS 15.4 beta. These include a warning when setting up AirTag that using one to track someone unknowingly is illegal, and that AirTag is designed to be detectable and for law enforcement to be able to link it to the owner.

It also includes clearer identification of devices, so you shouldn't get any ‘Unknown Accessory Alerts’.

One of the iOS 15.4 betas includes a new voice for Siri. This is a fifth option under the 'American' category. So it's an English language voice, and specifically in a US accent. This is a female voice, and you can hear a sample of it below.

Apple recently announced plans for a Tap to Pay feature, which would turn your iPhone into a contactless payments terminal, and the second iOS 15.4 beta adds frameworks for developers to enable this service in their apps.

If you use iCloud Keychain then you'll now be able to add notes alongside any password. This is a fairly standard feature of password managers, so it's been a long time coming and is good to see.

If you use Apple Card, then with iOS 15.4 you'll be able to add a widget for it to the Today view. This will display your balance, your available funds, and your daily spending across various categories.

Digital IDs in the Wallet app

Before we move on to smaller features, here's a big feature that there’s not actually any sign of in iOS 15.4 yet, but which might be included, since we know it’s being worked on.

This feature would allow US users to add their driver’s license or state ID to the Wallet app, and it would then be accepted at TSA checkpoints in select airports, with retailers, events and venues eventually expected to add support for these digital IDs too.

However, even once this feature is added, the roll out looks likely to be slow. It’s going to land on a state-by-state basis in the US (with Arizona, Georgia, Connecticut, Iowa, Kentucky, Maryland, Oklahoma, and Utah looking to be first in line), and there’s no word on exactly if or when the feature will expand to other countries.

Beyond the features above, all sorts of smaller tweaks and improvements have also been found in iOS 15.4.

These include the ability to turn off notifications for Personal Automations in Shortcuts if you don't want to be alerted about them, set up custom email domains directly from iCloud Mail on the iPhone (if you have an iCloud Plus subscription), activate SharePlay from the Share Sheet, and customize the left and right corner swipe gestures in the Notes app.

You can also choose whether to show still frames or poster art in the Up Next section of the TV app, use your iPhone to sign in to passkey-compatible websites and apps on your iPad or Mac, and make use of what Apple describes as 'new DualSense adaptive trigger firmware features' when you've paired Sony's latest controller with your phone.

Plus, those in the EU can now add their Covid vaccine cards to the Wallet app, and there's also evidence in the iOS 15.4 beta that Apple is working on a 'Cosmetic Scan' feature, which would be used to check your iPhone for damage when trading it in.

New versions of iOS almost always come with bug fixes, and iOS 15.4 is no exception. One such fix is that third-party apps will now display animations at 120Hz when using the iPhone 13 Pro or iPhone 13 Pro Max, which in some cases they weren't doing previously.

The second iOS 15.4 beta also fixes a bug that caused Siri to record and store interactions from a 'small portion' of iPhone users, even if they opted out.

We'd expect other bugs have been fixed too, but we're not sure which ones.