Home > HUAWEI > iPhone 13 Pro Max Review: Too big for me, and I usually like big phones

For as long as I’ve been using smartphones, I have almost always preferred the biggest possible version of the phone I carry. When Samsung’s first Galaxy Note phones drew mockery for its (at the time) gigantic 5.3-inch display, I was enamored by the possibility of watching movies or NBA games on a phone without squinting. Later, I cycled through the iPhone 6 Plus, LG V10, and Xiaomi Mi Note 2 — all devices that were considered “phablets” at the time, without issue.

The same problem returns with the iPhone 13 Pro Max. It’s a phone with a lot to love, but just too hard to handle for its size.

About this review: Apple loaned us all four models of the iPhone 13 series for testing. This review was written after two weeks of using the iPhone 13 Pro Max as my main phone. Apple did not have any input in this article.

Weighing 240g, with dimensions of 146.7mm x 71.5mm x 7.65mm, and with flat sides with hard corners, the iPhone 13 Pro Max is built like a brick. But it’s a very polished, premium brick. Maybe it’s because the sides are completely flat and thick (7.65mm), but the stainless steel railing feels noticeably more dense than aluminum railings in the non-Pro iPhones or Android phones.

For the most part, the iPhone 13 Pro Max looks identical to the iPhone 12 Pro Max of last year, with two noticeable changes — the notch is a bit smaller, and the camera module is significantly bigger. The smaller notch doesn’t so much, as Apple doesn’t fill that extra space with more information, but the larger camera modules bring noticeable improvements. More on this later.

The 6.7-inch OLED screen, which Apple calls “Super Retina XDR,” is beautiful to look at. I know there’s been a lot of debate lately about whether bigger is better with overall phone sizes (our chief content officer Nirave argues it’s not, in his iPhone 13 Mini review), but when it comes to display sizes, there’s no debate — bigger is better. Everything, whether it’s watching an Instagram Story or trying to frame a photo via the camera viewfinder, looks better on the iPhone 13 Pro Max than on the other three iPhone models because of the sheer display size.

And just like the iPhone 13 Pro, the iPhone 13 Pro Max also supports high refresh rates of up to 120Hz (Apple calls it “ProMotion”) and while the smoother animations are not as blatantly noticeable as a OnePlus or Xiaomi 120Hz panel, it happens enough here to bring a pleasurable scrolling experience.

Powering the iPhone 13 Pro Max is the Apple A15 Bionic, the most powerful SoC in smartphones by some distance. Whether it’s benchmarks or real-world performance like rendering a 4K/60 video, it noticeably outperforms the Qualcomm Snapdragon 888+. As the phone is so big, the iPhone 13 Pro Max packs the largest battery Apple’s ever used, and it provides stupendous battery life, which I’ll elaborate on in the next section. 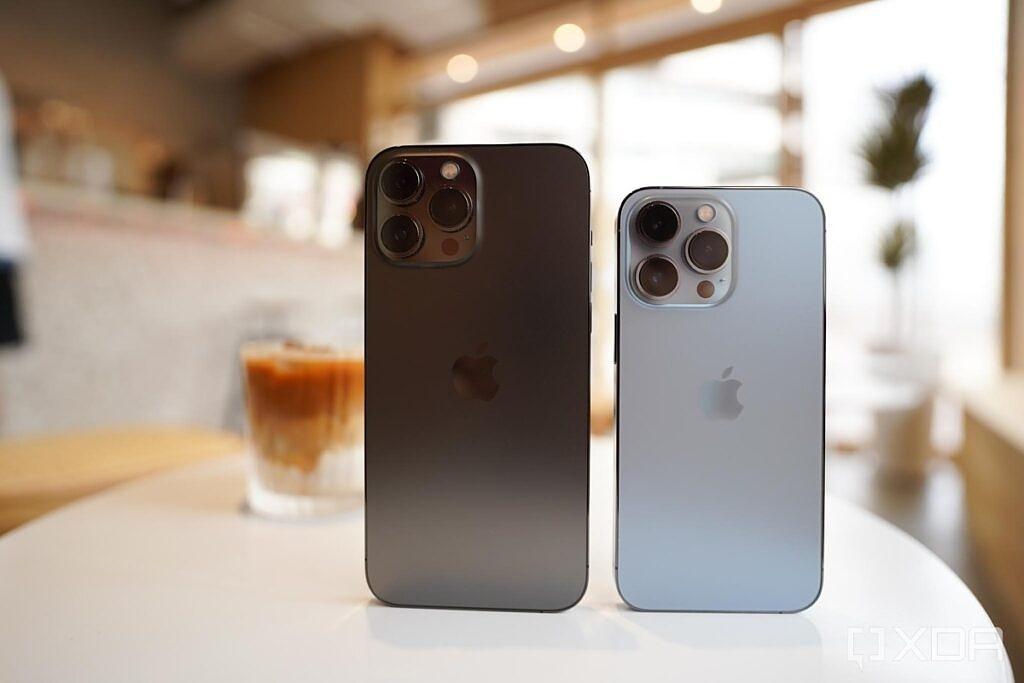 The iPhone 13 Pro’s triple-camera system consists of a trio of 12MP shooters covering the usual wide, ultra-wide, and telephoto focal lengths. Fundamentally they behave the same as last year’s, but performance has improved because all three lenses use larger image sensors, which take in more light and produce a more natural bokeh.

Unlike last year, there are no differences in camera hardware between the Pro Max and Pro model. I’ve written several thousand words about the iPhone 13 Pro’s camera performance in my iPhone 13 Pro full review and iPhone 13 Pro camera comparison, so you can check out those articles for an in-depth breakdown of the iPhone 13 Pro Max’s cameras.

In the below night shots sample captured by the main and ultra-wide cameras, you can see that, other than the neon lights being slightly blown out, everything about the shot is on point. It’s a noise-free, detailed low-night image with accurate colors.

The iPhone 13 Pro Max’s zoom lens is also improved over last year. It’s now a 3x optical zoom that can digitally zoom up to 15x. While any zoom beyond 5x will still look better on an Android flagship with a Periscope zoom camera, the iPhone 13 Pro Max’s 3x zoom is arguably the best short zoom on the market. The iPhone 13 Pro Max can zoom in and out in the middle of filming smoothly, without the jerky stutters that plague Android phones if you try to switch lenses mid-filming.

Apple’s A15 Bionic chip really is a beast. For typical smartphone things like surfing the web or going on Instagram, it’s complete overkill. But for power users, it’s undeniably powerful. For example, take “Cinematic Mode,” the new software feature available on all four iPhone 13’s. It’s basically portrait mode for video, which other phone brands have tried, to mostly bad results. But on the iPhone 13 phones, the software-generated bokeh is actually not bad-looking. Sure, a trained eye, or a hardcore professional videographer will likely still scoff at the fake bokeh, but it’s convincing enough for me and I’d bet most average smartphone users. The extra depth-of-field effect from the blurred background adds separation between subject and background for a more cinematic vibe.

But it’s not just that the A15 Bionic can produce this blur more convincingly than other phones, it’s also the fact that everything can be adjusted in real-time or after the shot. I can, for example, make the bokeh stronger or weaker, or remove it entirely. I can even change focus points after the fact. On top of that, the Neural Engine inside the A15 Bionic is so powerful it can even automatically track faces and movements.

For example, in the below footage, you can see that the focus is on my face, but when I turn to look at another face, the focus switches to that face. This requires an insane amount of real-time processing power that I’m not sure any other SoC can pull off.

Here’s another example of the A15 Bionic’s power. I live in a densely populated city with a lot of quirky things and people. I enjoy documenting these things on my Instagram account. Often, I’ll shoot a clip and then make quick trims and edits in the app LumaFusion and then post to Instagram. A 15 second 4K/30 footage renders and exports on an iPhone 13 Pro Max in under two seconds. When I use an Android phone and do these same tasks (using the app PowerDirector), the rendering/exporting process takes anywhere from 8-12 seconds. Sure, it’s not the most direct comparison because I’m using different video editing apps, but the gap in exporting time is so huge, it’s undeniable.

Long story short, I’ve taken the iPhone 13 Pro Max out on one of my heavy usage Sundays (when I go out for 14 hours and shoot dozens of photos and videos, as well as constantly posting on social media), and I’d finish a 14 hour day with like 40% battery life left. Similar usage would have drained a Galaxy S21 Ultra or a Xiaomi Mi 11 Ultra entirely or almost entirely.

You already know this because I spoiled it in the introduction, but the biggest complaint I have with the iPhone 13 Pro Max is that the phone is just too big. I want to reiterate that I am usually okay with big phones. I used the Galaxy S21 Ultra, Xiaomi Mi 11 Ultra (both phones have 6.8-inch displays and weigh over 200g) this year without issues.

But the iPhone 13 Pro Max is particularly hard to use because it’s wider than other 6.8 inch Android phones (the iPhone 13 Pro Max measures 78.1mm, or about 2.8 inches horizontally). Compounding matters are those thick flat stainless steel sides with hard 90-degree angle corners that really dig into your palm after prolonged use.

It’s this boxy design that’s ultimately the ergonomic killer in my opinion, because I used the iPhone XS Pro Max and iPhone 11 Pro Max without issues. I concede part of the problem is I don’t use a case with my phones. Those who slap a case, particularly a rubbery one, should soften the hard corners enough that they don’t eat into their palms. But that case would also make the phone even wider.

Not helping matters is the fact that iOS is not as well-optimized for one-handed usage as an Android phone is. For example, you still must swipe from the very top of the screen to activate the notification panel or control center on iOS. You don’t have a free homescreen grid so all your apps must sit in a top-down, left-to-right order. Apple’s one-hand mode, called “Reachability,” only shrinks the screen vertically but not horizontally.

The homescreen app grid is identical for both of these phones

Despite the iPhone 13 Pro Max having such a tall and wide screen, you can’t use a more dense homescreen layout. You can still only fit just four apps in the bottom dock, just like the 5.4-inch iPhone 13 Mini. Apple made absolutely no adjustment to its UI to account for the fact that iPhone screens can range from 5.4-inches to 6.7-inches. It’s absurd.

The iPhone 13 Pro Max is an extremely powerful phone with the best SoC, video camera, and ecosystem of apps and accessories. I personally find its size too unwieldy and uncomfortable to use long term, but this may not be an issue to you if you have large hands. I am 5’10” for reference, and I do not have small hands, and I still find the phone uncomfortable to hold and use regularly.

The benefits of having a larger screen are clear, so if you really do want the most immersive iOS experience, I’d recommend going to a store and handling the iPhone 13 Pro Max in person to see if you can accept its heft. I’d recommend using it for ten minutes straight to see how it feels, as the discomfort doesn’t kick in immediately. Use it for a while, and you may feel the phone digging into your palm.

I really do think Apple should consider going with a more elongated aspect ratio (like Android phones) to narrow the width of its next Max iPhone, as well as optimize iOS to make it more one-handed friendly.

Next: Here are the best skins for MacBook Pro