JioPhone Next -- the new smartphone from Reliance Jio and Google, priced at Rs 6,499 -- will be on the market from Diwali. The 4G-enabled phone will be available on an upfront payment of Rs 1,999 and equated monthly instalments (EMIs) of Rs 300-600 over the next 18-24 months.

Customers choosing the instalment option will get free daily or monthly data and unlimited voice calls, depending upon their EMIs. JioPhone Next, earlier scheduled for launch on September 10, is part of Reliance’s strategy to win over 300 million 2G customers.

It has been held out as one of the most affordable phones in the world. But the pricing came as a surprise because it was speculated to be under Rs 4,000.

The companies, however, said the entry price of Rs 1,999 was affordable and almost equal to a feature phone. Also for the first time, phones in the entry-level category are getting a financing option, Jio and Google said in a joint announcement on Friday.

The phone will be available for purchase on Jio Mart’s digital network of 30,000 partners across the country.

“I have always been a firm believer in the power of digital revolution to enrich the lives of 1.35 billion Indians. We have done it in the past with connectivity. Now we are enabling again with the smartphone device,” Reliance Industries Chairman Mukesh Ambani said in a statement. 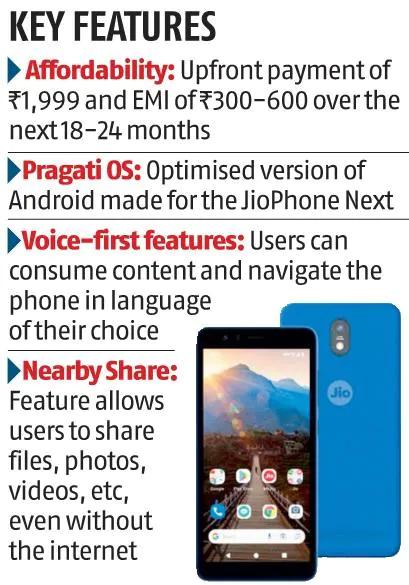 Google Chief Executive Officer Sundar Pichai said: “The JioPhone Next is an affordable smartphone designed for India … To build it our teams had to work together to solve complex engineering and design challenges and I am excited to see how millions will use these devices to better their lives and communities.”

The phone has some differentiated features such as the voice assistant, read aloud function, and language translator, and allows users to share files, photos, or videos without the internet. Jio had tied up with Bengaluru-based UTL Neolyncs to manufacture the handsets.

IDC India Research Director Navkendar Singh said half the country’s feature phone users used handsets in the Rs 1,000-1,200 price range and Jio’s objective was to capture customers from this segment.

“Jio will have to address the issue of anxiety of owning a smartphone apart from just affordability. Convincing a feature phone user to pay Rs 300 per month for a device plus a data plan will be a massive challenge. I believe the new phone will end up appealing to buyers in Rs 5,000-7,000 segment and also those looking for refurbished smartphones. Smartphones in the below Rs 5,000 category account for only 5 per cent of the smartphone market while the majority is in the Rs 5,000-20,000 range,” he said.

Prabhu Ram, head of industry intelligence of market research firm CyberMedia Research, said JioPhone Next would be a potential market disruptor with its voice, video and vernacular features and will foster a digital transformation in India.

He estimates that Jio would ship 3.5-4 million devices between now and December-end and would drive volumes further next year with easing of supply chain constraints.

A Jefferies report in September had said the country had over 430 million smartphone devices. The foreign brokerage said that the phone launch was an attempt by the company to boost data usage. JioPhone Next has an addressable market size of 540 million, which includes 320 million feature phone users and 115 million JioPhone users, it had said.