Mumbai:A level 4 fire broke out in four-storeyed Prime Mall in Vile Parle West, Mumbai, on Friday. Firefighters are battling the blaze. A fireman was left injured in the incident and another person is critical. A civic official, meanwhile, said that so far, there is no report of injury to anyone in the blaze.

According to a fire brigade official, they received a call around 10:15 am and the team reached the spot at 10:27 am.

"The fire was confined to the basement and the first floor of the complex," he said.

The official further said that 16 fire engines, 11 water tankers and fire fighting equipment were used to control the blaze. 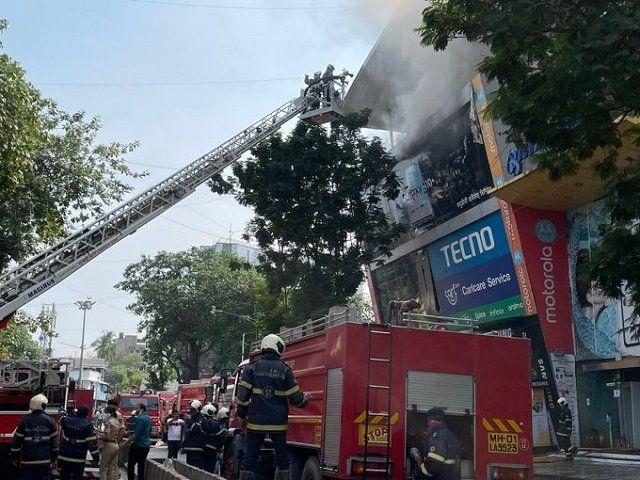 "Fireman Mangesh Gaonkar, 54, sustained a minor injury and is stable, while 20-year-old man, Mubasir Mohammad, is in a critical condition due to inhalation of smoke," said a civic official.

Both of them have been admitted to Cooper Hospital, he added.

Earlier, the fire brigade had described it as a level three (major emergency call) fire, but later upgraded it to level four (serious emergency call) at around 11.30 am.

Meanwhile, Aam Aadmi Party's Mumbai working president, Ruben Mascarenhas, took to Twitter to share photos and said that the entire Irla Market Road has been closed due to the incident.

"We only get empty audits in Mumbai by the Fire Dept of the BMC, with zero compliance. Sad," tweeted Mascarenhas.

Major Fire at Irla's Prime Mall, Lots of smoke.Entire Irla Market Road has been shut down. Fire Brigade at it. Praying that there is no loss of life.We only get empty audits in Mumbai by the Fire Dept of the BMC, with zero compliance. Sad#PrimeMallFire pic.twitter.com/Ovt3X4rNWz

The incident is the third major fire that has been reported in the city this week.

A fire broke out at a garage of an automobile showroom in Powai in the Western suburbs on Thursday, while the service centre of a multinational company suffered large-scale damage in a blaze on November 16.

In December 2011, a minor fire had erupted in a shop on the fourth floor of the Prime Mall. The 'Grade One' fire was controlled within two hours. A short circuit was said to be the reason behind the incident.

Prev: How to preorder the Samsung Galaxy Tab S8 series

Next: Rasotsav plans on expanding its footprint Subscribe To Our Newsletter BW Communities