When HMD revived Nokia in 2018, its debut lineup impressed us. Since then, Nokia’s lower-end offerings have been solid choices for shoppers with tight budgets. Unfortunately, the Nokia G10 ($149.99) fails to elicit the same level of enthusiasm as last year's similarly priced Nokia C5 Endi ($169.95). Though the G10 has incredible battery life, a generous software upgrade policy, and a lovely display for its price, it's brought down by its lethargic processor, meager storage, and a body that feels cheaply made and breakable. If you absolutely cannot pay more than $150, the G10 will get you through the day, but if you can scrape together another $20, the 2021 edition of the Motorola Moto G Play ($169.99) is a far better budget-phone buy.

The Nokia G10 is available in blue or purple, and there's not much difference between the two; our test unit was purple, but we found that in many lights it looked blue. At 6.5 by 3.0 by 0.4 inches (HWD) and 6.4 ounces, it’s the perfect size to hold in one hand for an extended commute.

The phone’s backplate and chassis are plastic. The back has a textured, matte finish that resists fingerprints and gives the phone a nice grippy texture. The plastic itself feels thin. Centered at the top of the backplate, you’ll find a circular camera module. A prominent Nokia logo is etched in the center of the back panel.

A headphone jack is on the top edge; a USB-C charging port and the speaker grille are on the bottom. On the left side, there's a Google Assistant button and a dual SIM/microSD slot. A power button with an integrated fingerprint sensor makes its home on the right side, along with a volume rocker. The hybrid fingerprint sensor is slow but accurate.

A 6.5-inch LCD with a teardrop notch for the camera dominates the front of the phone. Bezels are minimal, save for the bottom edge, where you’ll find a small Nokia logo. Despite the low 1,600-by-720-pixel (269ppi pixel density) resolution, the display is crisp. As with all the Nokia phones we’ve reviewed, the displayed colors skew cool, and the screen is not bright enough to use in direct sunlight.

A representative for Nokia told us the phone is splash resistant and has a strengthened-glass display. There’s a screen protector on the phone, and a jelly case in the box, but neither will do much to keep the screen from cracking if you drop the phone face-down on the pavement. However, the plastic body should withstand minor drops without much damage.

The Nokia G10 works on AT&T and T-Mobile's 4G (LTE) networks, but not Verizon's. Overall band support is good, but band 71, which is important for rural customers on T-Mobile’s network, is missing.

We tested the phone on AT&T's LTE network in Chicago, using a Cricket SIM, and recorded average speeds of 6.4Mbps down and 4.1Mbps up. If you’re on a postpaid carrier, you’ll likely notice better speeds, since Cricket caps its customers’ speeds and prioritizes traffic for AT&T customers. 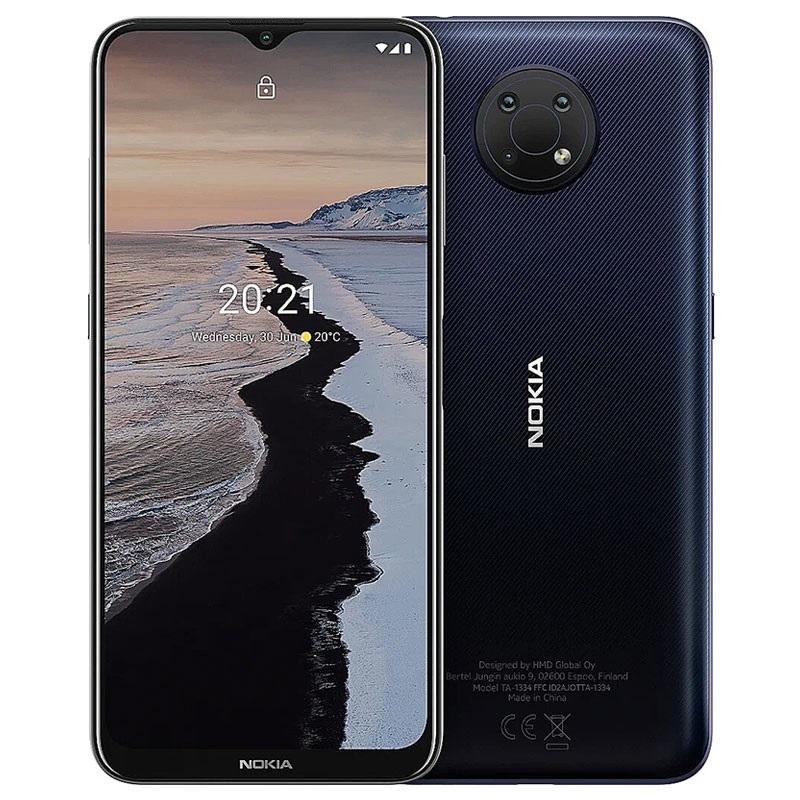 Call quality is good. Earpiece volume peaks at 84dB and is loud enough to enough to hear on a crowded train. Noise cancellation worked well on all our test calls.

Audio quality with the bottom-firing speaker is disappointing. The sound is brassy, with mids pushed to the front, and there’s noticeable distortion in the highs. With a peak volume of 88dB, the speaker is loud enough to fill a room.

Dual-band Wi-Fi and Bluetooth 5.0 are supported. NFC is missing, but it’s rare to see a $150 phone with that feature.

The G10 is powered by a MediaTek Helio G25 mobile platform along with 3GB of RAM. There’s 32GB of storage, with about 23GB available out of the box. You can add up to 512GB of external storage with a microSD card.

Even simple tasks are a struggle for the G10. There's noticeable lag when opening an app or scrolling through Twitter. The camera app is exceptionally slow, taking several seconds to switch between the front and rear cameras. Although 3GB of RAM is the absolute minimum we’d recommend in 2021, a lack of RAM can't take all the blame for these issues; the Moto G Play performs much better with the same storage and RAM configuration.

Gaming was a complete loss. Genshin Impact crashed every time we tried to open it. Alto’s Odyssey worked, but skipped frames and even a few app crashes punctuated our gameplay.

One bright spot is the G10's 5,050mAh battery. Nokia claims it will get you through three days between charges; if you don't use your phone much, that may be true. The G10 eked out 16 hours, 8 minutes on our battery drain test, in which we stream video over Wi-Fi at maximum brightness. That doesn’t quite live up to the Moto G Power’s 18 hours and 42 minutes, but it's enough to let you skip a day between charges.

Selfies That Will Make You Shudder

Camera performance is another weak point for the G10. The rear stack packs a 13MP primary sensor, a 2MP depth sensor, and a 2MP macro lens.

In good light, the G10’s primary sensor does a tolerable job. In our test shots in the default camera mode, color accuracy and clarity were spot on. Depth of field was slightly shallow. When we switched to Wide-Angle mode, we noticed some loss of clarity around the edges, but the photos were fine for social media sharing.

The macro lens is unsurprisingly poor. Our test photos were flat, with significant fringing and blurring.

Selfie cameras typically do a good job with enough light, but the G10’s 8MP sensor falls short. Our photos were crisp with excellent depth of field, but there was noise around the edges. Our subject also appeared to have blemishes on their skin, even though their complexion was smooth. Low-light test shots were a muddy mess, with unnatural blurring in the foreground that can likely be attributed to over-aggressive noise cancellation.

A stock version of Android 11 ships on the G10. There’s no bloatware on the unlocked version, and HMD doesn't even preinstall productivity apps. It’s rare and refreshing experience to use a budget phone without constant notifications popping up.

The G10 is one of the few Android One phones sold in the US. That means you’ll get two years of prompt OS upgrades and an added year of security patches.

A year ago, the Nokia G10's crisp display, excellent battery life, and multi-year OS upgrades would have been enough to excuse its sluggish processor, paltry storage, and mediocre build quality. But the budget phone market has changed a lot over the past 12 months, and the G10 can’t keep pace with its competition. The Moto G Play comes in at just $20 more than the G10 and far surpasses it, with superior build quality, longer battery life, and a more robust mobile chipset.

If you can spend a little more, check out our Editors’ Choice winner for low-cost phones, the Samsung Galaxy A32 5G ($279.99). It looks great, it's more durable, and it has a much more powerful chipset, with good cameras and even 5G connectivity. With phones like the A32 5G on the market, there's just no room for one that cuts as many corners as the G10.

Next: 5G Expands to More-Affordable Phones as Chip Prices Fall