Home > HUAWEI > Oppo A9 review: Playing it safe on all parameters

Oppo recently launched its latest A-series smartphone, the A9, in a bid to rake in offline sales as competition in the market heats up. The latest entrant from the Chinese mobile giant is banking on the design, camera and battery as its biggest USPs to target budget shoppers in the country.

Oppo A9 is priced at Rs 15,490. While the handset can be bought online via Amazon.in and Tata CLiQ, it is widely available offline from Croma stores and all major retailers. Oppo A9 is pitted against the likes of Xiaomi Redmi Note 7 Pro, Realme 3 Pro and others. While the competition is tough for the A9, Oppo's offline presence and brand awareness play a major role in success.

Oppo A9 comes in two shades, Marble Green and Flourite Purple. We have received the latter for review, which has a hint of Oppo F11 Pro with its 3D gradient finish. The smartphone comes bundled with a 10W charger along with the regular set of accessories, including a charging cable, silicon case and a screen protector.

After using Oppo A9 over an extended period of time, here are some insights into how the smartphone fairs against the rivals and a closer look at Oppo's choices for the A9's specs.

Oppo smartphones have always been an eye candy and the A9 isn't different. Borrowing some inspirations from the higher-end tier, Oppo A9 has a striking design for a budget phone. The 3D gradient finish on the back is flamboyant, but if you want an elegant touch then go for the green finish.

Oppo's branding can be seen printed vertically along the line of vertically-stacked dual cameras, LED flash and fingerprint sensor. There's a sense of uniformity in the design, which is visually appealing. Oppo A9 has the power button on the right side, which is well within the reach of the thumb or the middle finger, depending on which hand you're holding the phone in. The volume controls are on the left and they are just as comfortably within reach.

Oppo A9 has slim bezels around the sides, has a waterdrop notch and dominant chin at the bottom. The waterdrop notch might seem a bit outdated but works for those who do not like the pop-up mechanism. Oppo couldn't have gone with a punch-hole screen at this price range, so a notch makes the most sense.

Oppo A9 is compact, yet bags a generous 6.5-inch Full HD+ display. The colours are bright and vivid, suitable for late-night binge-watching or gaming with decent graphics. The sunlight visibility is also good on the A9, but the viewing angles are much better. The screen is protected with Gorilla Glass 5, which won't protect against falls but does add some durability.

While Oppo A9 wins in the design and display department, certain choices raise major questions. For instance, Oppo A9 comes with a MediaTek Helio P70 chipset - the same processor found in cheaper phones like the Realme 3 (Review). But you'll be impressed to know Oppo uses the same chipset in Oppo F11 Pro (Review), which packed decent power for most tasks.

For your day-to-day tasks, Oppo A9 can handle pretty much everything with ease. From browsing the internet, GPS navigation, social networking to communications via calls and IM apps, Oppo A9 is tasked with enough power to smoothly execute them. Multitasking doesn't create too much strain on the processor, which is where we found the 4GB RAM put into great use. 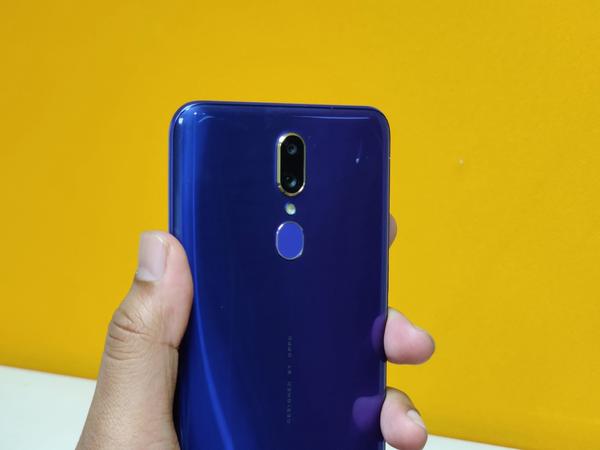 In terms of gaming, we played PUBG Mobile at medium graphics setting (default) and it worked pretty fine. The positioning of the speaker gets easily covered while in landscape mode to give muffled audio, but nothing a pair of earphones can't fix. Even after 30 minutes playtime, the handset didn't heat up, which is a good sign.

Oppo A9, like its other siblings, runs ColorOS 6, which is neat and responsive. The UI delivers a smooth experience and the animations are kept to a minimum. The most annoying part is the loaded bloatware on the phone, but with it comes interesting features like Hyper Boost and Game Assistant. If you're comparing the ColorOS 6 to OxygenOS, you'll be left disappointed. But Oppo has its own tweaks, hoping users will benefit from them. Also, the 128GB onboard storage is more than enough to keep you going even without worrying about offloading the bloatware.

Oppo A9's performance is not the best out there but doesn't leave you disappointed in the long run. The shortcoming of it is made up by the cameras, which comprise of 16MP (f/1.8) and 2MP (f/2.4) sensors on the back and a 16MP (f/2.0) sensor on the front. There are features like HDR, Ultra Night Mode and AI beautification to give photos a pleasing touch.

We shot some samples with the A9 and the photos came out punchy and lively. The colours are natural, with controlled saturation and contrast. The details are retained well in ideal lighting conditions, and to an extent in low light areas. The focusing is on point and the cameras offer good dynamic range. Selfies also come out really good, but there's a touch of beautification, which some might find unnatural. I loved how well the A9 cameras can capture portraits with excellent bokeh and edge detection. I wish there was an option to adjust the bokeh levels.

Check out the camera samples straight out of A9's camera roll:

Finally, the highlight of the phone is the battery. A 4,020mAh battery is a generous offering by Oppo, but the best feature is also its greatest enemy. There's only 10W charger in the box when Oppo has technologies like VOOC and SuperVOOC at its disposal. The handset also has a micro-USB port, which feels pretty outdated. Somehow, that is not at all surprising as Oppo uses microUSB port for its SuperVOOC charging as well.

Coming back to the 4,020mAh battery, it can get you through a busy day with ease. After fully charging the device, which took nearly two hours, Oppo A9 lasted a whole day with constant 4G on, WhatsApp communications, calls, browsing the internet and social networking and playing PUBG Mobile. With moderate use, the handset is likely to go longer than a day, so this is an area you won't be disappointed.

With strong points like a lasting battery, great design and good cameras, Oppo is playing it safe with the A9 specs. It is not going too overboard but doesn't fall short to compete against the rivals. But the A9 creates confusion in Oppo's own portfolio with handsets like Oppo K3 and Oppo F11 falling in the similar price bracket.

Oppo A9 will rake in offline sales, but it will face stiff competition online. The mere presence of handsets like Realme 3, Redmi Note 7 Pro, and slightly expensive Realme X and Redmi K20 makes Oppo A9 a tough choice. But Oppo's brand presence in India is quite strong, which would contribute towards A9 sales.

Next: Oppo F11 Pro Hands-On: The OnePlus 7 Will Probably Look Like This