The iPhone XS isn’t the only all-screen iPhone on the block this year, but with its balance of large screen and small body, is it still the iPhone to buy?

To say that the iPhone XS looks exactly the same as the iPhone X is somewhat of an understatement. Apart from a pair of new antenna lines and asymmetric holes in the bottom, the phone is an identical metal and glass sandwich. Unless you buy the new gold colour.

Fortunately that’s not a bad thing this generation, as it maintains everything that made last year’s iPhone X so good. That includes the large screen squeezed into a small body, the luxurious feel and top-notch new design that ditched the home button.

The 5.8in OLED screen is one of the best ever fitted to a smartphone and makes watching movies and TV shows on the commute a joy. The speakers are now louder, but there’s still no headphone jack nor a lightning to 3.5mm adapter in the box this time round.

Weighing 177g, the iPhone XS is 3g heavier than the phone it replaces, 3g lighter than the Huawei P20 Pro but 14g heavier than the Samsung Galaxy S9. It’s also thinner than most at 7.7mm thick. All of which is to say it’s easy to pocket and handle, with either one or two hands.

The iPhone XS has the same internals as its bigger sibling, the XS Max, and unsurprisingly performs exactly the same. With the six-core A12 Bionic the phone is responsive, smooth and likely has more raw power than most will need, until some magical new app comes along to take advantage of it.

Game performance is also excellent, while the improved AI processor speeds up AR experiences and other machine-learning systems.

That means if I take it off the charger at 7am on day one, it’ll only just make it to my alarm at 7am the next day without being plugged in, meaning you will definitely need to fully charge it at least once a day. On heavy days it would be on its knees as I made it to bed.

That was while using it as my primary device sending and receiving hundreds of emails, messages and push notifications, listening to five hours of music on Bluetooth headphones, watching an hour of Netflix, and shooting about 10 photos a day.

A full-day’s battery is the bare minimum that’s acceptable in 2018, and competitors can last closer to double that. 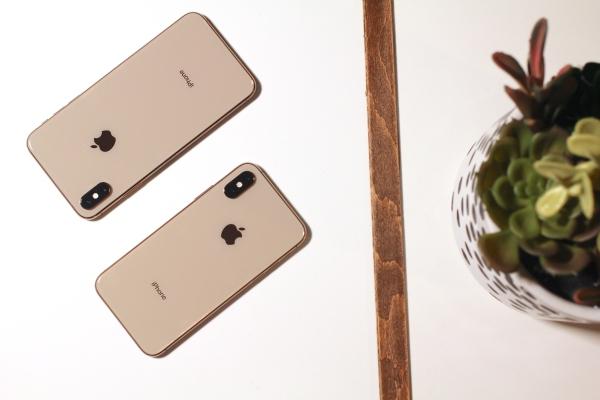 While there are many factors that affect battery life, it’s worth noting that the iPhone XS and iPhone XS Max were affected to a greater extent by cellular network congestion, such as that experienced on commuter trains and in packed stations, than competitors.

Both phones bounced around between Edge, 3G and 4G more often than the iPhone X, Google’s Pixel 2 XL and a OnePlus 6, and even with full 4G signal the iPhones struggled to pull down data and got hotter where the competitors still managed to load sites and emails, albeit slowly.

The iPhone XS runs iOS 12 out of the box, which is a refinement of last year’s iOS 11 rather than a massive shakeup. It still has the same problems of status icons being lost because of the notch in the screen, but it has made big improvements with grouped notification handling and now has integrated wellbeing tools so you can keep an eye on your smartphone usage.

Apple has also added a prominent banner on the lock screen when you have Do Not Disturb active, which makes it much harder to forget to deactivate it when you wake up.

Face ID returns as Apple’s only biometric option on the iPhone XS. It works just as well as it did last year, identifying me without fault, unveiling my notifications and unlocking the phone.

It can have problems with certain sunglasses, and it would also be nice to have the option of using my fingerprint to unlock or pay for things.

The iPhone XS has the same camera system as fitted to the XS Max – two 12-megapixel cameras on the back, one with a wide-angle lens and the other a 2x telephoto lens.

New for this year is better detail capture, particularly when images are viewed at full resolution, and better low light performance. But it is Apple’s improved “Smart HDR” function that is most noticeable, making images with extremes of contrast such as those shot into the sun much more usable.

The portrait mode has also been improved, now with the ability to adjust the level of background blur after capture, which is fun.

The selfie camera is good, but not quite the best on the market for preserving skin detail. Some have complained that it smooths skin and makes them look orange, but that’s not something I could see in photos.

The iPhone X set a new bar for what an iPhone could be. It was a massive step forward for Apple and put it ahead of many competitors in smartphone design and function.

The iPhone XS maintains the forward-looking design and function, feeling wonderful in the hand, has a noticeably better camera and is still arguably the best phone on the market right now at balancing screen size with usability.

But it’s certainly not perfect, with weaker battery life than last year and a still eye-watering price. With the cheaper 6.1in iPhone XR around the corner, it might be worth waiting to see what it’s like before shelling out £999, but the iPhone XS is still great.

Cons: no headphone socket, no fingerprint scanner, glass will break if dropped, very expensive, no fast charger or USB-C cable in the box, no headphones adapter in the box

Prev: AirPods 3: Every rumor that was right (and wrong)

Next: Oppo A9 review: Playing it safe on all parameters