The Oppo Band Style is basically the regular Band coming with an extra strap in the box, with the rest of its highlights including an AMOLED panel, real-time heart rate monitoring, and the usual set of features you find on any other fitness band in this price range.

Alongside the extra strap, the feature that sets the Band Style apart from most other wearables in its category is the continuous SpO2 monitoring. But is that enough to make it a worthy buy? We try to find that out with this review.

The Oppo Band Style has a simple and minimal design. Its screen is covered with a 2.5D scratch-resistant curved glass, while the back is made of polycarbonate. The main module weighs 10.3 grams without the straps, but even with those attached, the Band Style is very lightweight, making it ideal for wearing during a workout and sleeping.

The Oppo Band Style doesn't come bundled with one but two removable straps - Sport Strap and Style Strap. The former is made of TPU, while the latter is made out of fluorine rubber. The Sport strap looks like any other regular band we've seen on most other smartbands, but the Style strap, as evident from its name, looks more fashionable and is likely to appeal more to female customers. It's also more flexible, which makes for a comfortable fit.

That said, while both straps have different designs and are made of different materials, they are 14mm wide and have an adjustable length of 130-205mm. I tried both straps during the review period and found them to be comfortable enough for all-day use.

The AMOLED screen on the main module has the Oppologo below, and around the back, we have the heart rate monitor and SpO2 sensor joined by the charging connector. The wearable is water-resistant up to 50 meters, allowing you to go for a swim or a shower without having to take it off the wrist.

The only complaint I have with the Oppo Band Style's design is the charging process. If you are using the Sport strap, you'll have to remove the main module every time you charge the Band Style. With the Style strap, you don't have to do that, but in my experience, the unit didn't fit snugly with the charging cradle at times, so having a USB-A connector like the Realme Band would have offered a better experience.

The Oppo Band Style packs a 1.1" AMOLED color touchscreen of 294x126 pixel resolution. It's covered with a 2.5D curved glass, displays up to 50 characters, and has 100% DCI-P3 color gamut coverage.

The AMOLED panel is colorful and vibrant and is nicely responsive. I also didn't face any legibility issues indoors. However, outdoors, under strong sunlight, I had to crank up the brightness level to 100% to view on-screen content.

The Oppo Band Style comes pre-installed with five watchfaces, and there are 40+ watchfaces you can choose from the HeyTap Health app, grouped in five categories - Health, Art, Joy, Simple, and Classic.

You also have the option to create your own watchface by uploading a photo from your smartphone, and the app lets you add a watchface with the world clock. But do note that you can only add up to five watchfaces to the Oppo Band Style at a time.

Like most other wearables, the Oppo Band Style comes with the Raise To Wake Screen feature, which can be kept enabled all day, or you can have it turned on/off automatically at specific times. This feature worked well in my testing and woke up the screen instantaneously.

The Oppo Band Style works with Android and iOS devices and relies on the HeyTap Health app that you need to download from their respective app stores to set up the smartband, sync data, and tinker with its settings.

The HeyTap Health app is simple to use and has a minimal UI. It has three tabs - Health, Fitness, and Manage. The Health tab gives you an overview of the health and fitness data, and you can tap on one of the cards for detailed information.

The Fitness section lets you start an indoor or outdoor running or walking workout, while the Manage tab lets you tinker with the app and Band Style's settings.

The HeyTap Health app always synced the Band Style's data quickly, but at times it didn't sync the SpO2 readings from the smartband. Besides, there's one thing about the app I found counterintuitive: the app lets you check your daily steps and calories data of different days of the week with left and right swipes, but it doesn't have continuity, meaning you have to change the week by tapping on the activity calendar icon in the upper-right corner of the app's screen and then select the date of different week, which hampers the user experience. 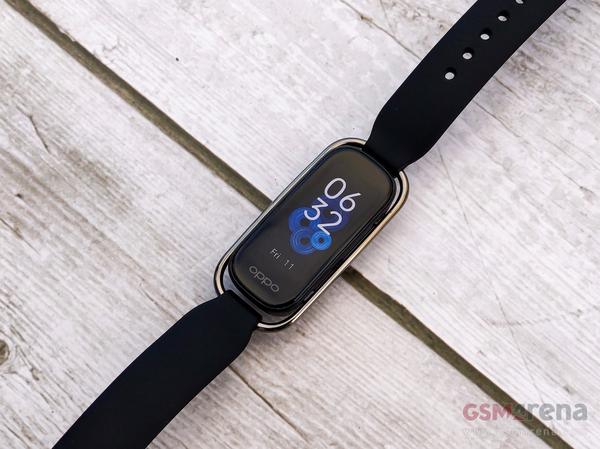 While the HeyTap Health app is simple and easy to use, the software on the Band Style isn't complex either and has a clutter-free UI, making navigation quick. A left or right swipe on the Band Style's homescreen lets you switch between the watchfaces, while a swipe up or down lets you browse through the apps.

And since Oppo has used continuous scroll, you can swipe up or down depending on which app you want to access first. However, you don't have to stick with the default order since you can rearrange it to your liking by heading to the More > Preferences > Band apps menu in the HeyTap Health app's Manage tab.

And when you are on homescreen, you can swipe left or right to change watchfaces, which, I believe, is wasteful. Oppo could've instead used the long-press gesture on the homescreen to switch watchfaces while allowing users to quickly access other information with left/right swipes.

That said, aside from being simple to use, the Band Style's software also provides a snappy experience, and I never saw the smartband stutter even once during the testing period, which is commendable.

Aside from the health and fitness features, the Band Style also comes with incoming call and app notification alerts, alarms, stopwatch and timer, weather forecast, music and camera controls, and phone finder. However, unlike the Chinese model, the global version doesn't have an NFC chip on board.

The Oppo Band Style can measure your heart rate automatically every second or at intervals of two or six minutes. But you can also measure it manually when you want by navigating to the Heart Rate page on the Band Style, which on average took 35 seconds in my testing.

However, it's worth mentioning that the Band Style didn't record resting heart rate at times, and many times the wearable didn't record the pulse during a workout or display it on the screen. This not only happened with the first unit I received, which was an engineering sample, but also the retail version that was sent later as a replacement.

That said, you can't check your heart rate data on the Band Style, so you'll need to use the HeyTap Health app to see your daily, weekly, monthly, and yearly pulse measurements. But keep in mind that the data presented to you is quite limited compared to other fitness bands since the app doesn't group your pulse into different categories such as Aerobic or Anaerobic, and neither does it show your daily average pulse.

Besides, you have to tap on the heart rate diagram to check your minimum and maximum heart rate, which isn't quite user-friendly. Perhaps Oppo should take a clue from other brands on how to better present the health data.

Moving on to blood oxygen level measurement, the SpO2 sensor on the Oppo Band Style took 15-30 seconds on average to manually measure the blood oxygen saturation. And like the heart rate data, you need the HeyTap Health app to check your daily, weekly, monthly, and yearly blood oxygen levels. The smartband also supports continuous SpO2 monitoring, but that only works when you are sleeping.

Speaking of sleep tracking, the Oppo Band Style doesn't record REM sleep, but it does track afternoon naps and monitors your SpO2 levels for daytime sleep as well, which is nice. You also get an overview of your nighttime and daytime sleep under the Sleep page on the Band Style, and a more detailed analysis can be found on the HeyTap Health app.

It's also worth mentioning that if you take a nap during the day, you will see the daytime sleep record on the Band Style instead of last night's, and the wearable also replaces the wake-up time of last night's sleep with afternoon nap's, which isn't ideal since the overall record for that day then says you woke up late.

Another issue I faced on both the Band Style units was inaccurate sleep tracking. The wearable did track the fall asleep and wake-up times correctly for nighttime sleep, but often added the awake times to the record when I was sleeping.

Next up, we have sports tracking, which includes 12 workout modes - Outdoor Run, Indoor Run, Outdoor Walk, Outdoor Cycling, Indoor Cycling, Elliptical, Rowing, Cricket, Badminton, Swimming, Yoga, and Fat Burn Run. The last one is specially designed to provide real-time guidance based on your heart rate to help you get in a better shape.

The Oppo Band Style ships with a 100mAh battery, which is advertised to go for up to 12 days between charges if "real-time heart rate monitoring and Screen Turning on upon Lifting Wrist are off, the user checks the time 30 times and receives 30 message notifications and two incoming call notifications per day, and two alarms go off per day."

In my testing, I got eight days of endurance on average with the following usage and settings:

Once the Band Style's battery is drained, you can charge it with the bundled adapter that snaps onto the rear side of the wearable magnetically. Oppo says it can juice up the cell in 1.5 hours, but the cell took about 1 hour and 20 minutes on average for a full charge in my testing.

The Oppo Band Style has minimal design, snappy performance, and a simple, clutter-free UI. It also sports a vibrant screen and has 50-meter water-resistant, allowing you to wear it when swimming.

The Band Style is also one of those rare wearables that come with continuous SpO2 monitoring and more than one strap included in the box - a regular strap with a sporty look and a Style strap for those who want to make a fashion statement. But that's about it.

The notifications management on the Oppo Band Style isn't up to the mark, and both the units of the smart band I received did a not-so-stellar job at sleep tracking and didn't record the heart rate during workouts at times - basic functions a fitness device is expected to be good at irrespective of its price.

I hope Oppo fixes this through firmware updates soon. However, the Band Style already picked up a few software updates during the review period, and that didn't help much.

If you live in India, for that amount, you can get the Xiaomi Mi Smart Band 5, which doesn't come bundled with an extra strap and SpO2 sensor for blood oxygen level measurement, but you do get stress monitoring and REM sleep tracking - features that aren't present on the Band Style. You can read our Mi Smart Band 5 review here to learn more about it.

Next: Jio Phone Next price leaked: 3 ways this low-cost 4G phone could be a game changer