The battles are really on now. The OnePlus Nord 2. The Realme X7 Max 5G. And now the Poco F3 GT. All of a sudden, its bloody battles being witnessed in the Rs 25,000 to Rs 35,000 price band for Android smartphones, which must be great news for buyers who don’t necessarily want to compromise on performance and experience but would loathe to spend extravagant amounts of money on an Android flagship phone, in its common definition. The rebirth of the Android flagship killer, with a vengeance? To be fair, as a buyer, things have never gotten much better than this. Particularly with the most exciting phone of this lot, the Poco F3 GT. And I do not say that lightly. Mind you, with prices starting Rs 25,999 for now, the Poco F3 GT definitely has a price advantage on the OnePlus Nord 2.

The Complicated Excitement About Pricing: The Poco F3 GT is available in three variants. That’s 6GB RAM + 128GB storage which is currently priced at Rs 25,999 followed by the 8GB+128GB variant which has a Rs 27,999 price tag and the top-line spec that’s 8GB+256GB and this costs Rs 29,999. This is the first time, if memory serves me well, when there has been a three-tiered pricing for phones, based on how quickly you buy them after launch. These prices are applicable till the end of day on Aug 2 after which prices for all variants increase by Rs 500 each. And that remains applicable till noon on Aug 9, at which point the final pricing will see a Rs 500 increase for each variant again.

And The Complicated Excitement About Choice: The Realme X7 Max 5G prices start at Rs 24,999 for the 8GB+128GB variant and then there is the 12GB+256GB option which costs Rs 27,999. There is absolutely no way to play down the spec sheet advantage that this phone has for the entry spec option, with 8GB RAM compared with 6GB RAM, though real world performance differences may be minimal. For the OnePlus Nord 2, Prices start at Rs 27,999 for the 6GB RAM + 128GB storage option. Then there’s the mid-spec 8GB + 128GB option priced at Rs 29,999 and the highest spec OnePlus Nord 2 phone will cost you Rs 34,999 for 12GB + 256GB. The OnePlus Nord 2 5G is playing the premium experience card and delivering very well on that aspect. Now the choice will be yours, on what you’d prefer.

You Thought Smartphone Designs Can Now Only Be Boring? At first glance, there is just something about the Poco F3 GT’s design which makes you go wow. What we have here is the Predator Black colorway, and it is very nice to see a non-shiny finish on the back panel. And it isn’t a simple finish either, because there are a variety of visual elements to catch your attention. The flash resides beneath a cut-out that resembles the bolt of a camera flash. The sophisticated Poco logo has stripes running down either side of it, widening near the text. And towards the sides, you have a finish that you’d normally associate with high-grip surfaces—though it doesn’t provide any extra grip. And this is all before you eventually discover the dual unique pulsating light that integrated in the camera module near the upper and lower curves, and this can be configured to be a notification indicator—quite useful if you like to keep your phone face down on a table.

Racing Car Inspiration? Poco says that the Poco F3 GT has a slipstream design. Now that’s where those stripes also got the inspiration from—the wind tunnel? This is a 22-step engraved metal which was meant to have an anti-fingerprint finish. And that’s what the Poco F3 GT delivers on, with aplomb. Through the duration I’ve used this phone, wiping fingerprints hasn’t really figured in the larger scheme of things. Which is great. There’s the Corning Gorilla Glass 5 for added scratch resistance for the display. The Poco F3 GT is 8.3mm thick, and to be fair, the well-balanced design means it snuggles well in the hand. Just the right amount of flat and curve on the side spines is something a lot of other phone makers could learn—it is these small things that a consumer really notices. 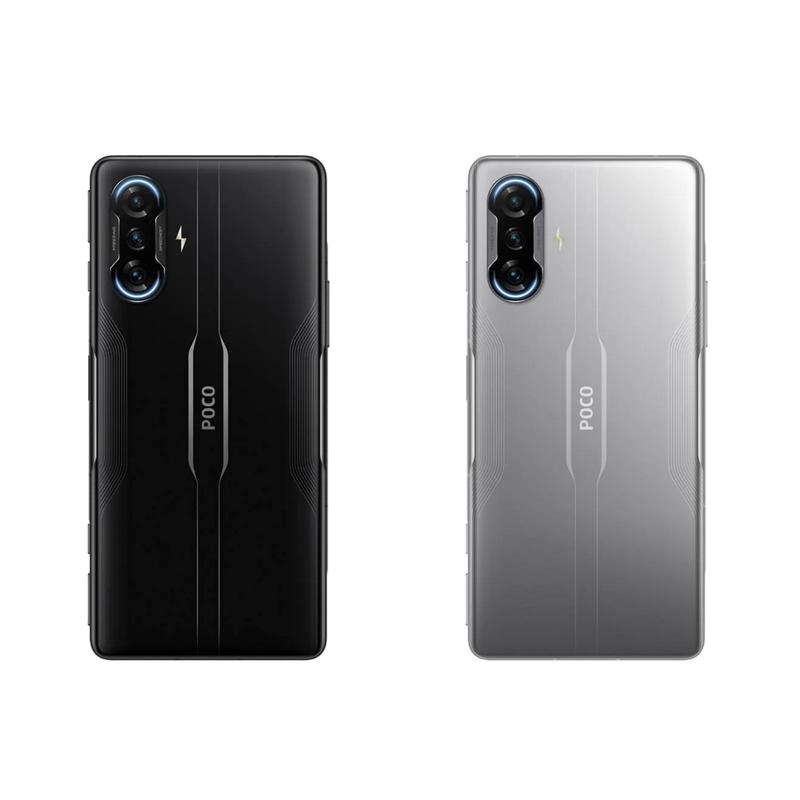 Gamers, Please Take Note: The Poco F3 GT is the first phone to have mechanical triggers on the side spine. This means you may not have to bother with third-party accessories such as controllers if your phone is also doubling up as your gaming rig from time to time. The inspiration for these Maglev mechanical triggers most certainly comes from Maglev trains, and the extensive use of magnets. The implementation on the Poco F3 GT allows you to pop these up when you need to start gaming, and then hide them away safely with two sliders—a magnetic key allows this to happen. Poco says that these are tested for 1.5 million presses, which should safely mean these will last the lifetime of the phone.

When You Have Power, This Much Power, It Shows: The one common element in this three-way battle between the Poco F3 GT and the Realme X7 Max 5G and the OnePlus Nord 2 is the MediaTek Dimensity 1200 chip. This is the most powerful smartphone processor that MediaTek makes and gives these comparatively more affordable phones with Android flagship phone credentials without companies having to spend a lot more to get the stock of the Qualcomm 8 series chips. And you having to shell out 2X or so more for a phone at the shop. The Dimensity 1200 is a 6-nanometer chip, and the specifics are as follows—there is 1 Ultra Core clocking up to 3GHz, 3 Super Cores up to 2.6GHz and 4 Efficiency Cores that clock up to 2GHz. The performance is 22% faster than its predecessor chip and battery efficiency will be as much as 25% more. And of course, ticks off the 5G requirements too, for the long term. The battery is a large 5065mAh capacity with 67-watt fast charger bundled with the phone, in the box—read that again, you don’t need to go and buy a separate fast charger.

The Dimensity 1200 Is Adding A Welcome Dimension: Before the MediaTek Dimensity 1200 arrived on the scene, phones in this price range would mostly make do with a Qualcomm 7 series chip. And while adequate for most intents and purposes, there was always the doubt in the mind of the more discerning customers. Will these be powerful enough in the long run? Is longevity ticked off? What if I want to play games? In reality, the Dimensity 1200 just takes the game away at rapid speed, and closer to the Qualcomm Snapdragon 8 series chips, than you’d initially imagine. I did not notice any stutters at all at any point with the Poco F3 GT, and no complaints from the system even with apps carelessly left open in the background. The only time I noticed tepid heating on the back panel for the common usage scenarios is when the camera was in use. A lot of that cooling credit must also go to the vapour chamber cooling with 8-layered graphite sheets for heat dissipation that the Poco F3 GT integrates. Again, the attention to detail matters.

Larger Display And That’s A Good Thing: For those who want more compact displays, the OnePlus Nord 2 5G and the Realme X7 Max 5G with their 6.43-inch screens would be ideal. But if you want a larger display real estate, the Poco F3 GT could just be worth considering. This is a 6.67-inch screen, much more in line with larger Android flagship phones, and feels more wholesome for a variety of uses that could also include gaming. This OLED display ticks off the 120Hz refresh rate aspect and has the 480Hz touch sampling rate for faster accurate touches. I really liked the richness of the Poco F3 GT’s display, with colours standing out rather than popping out. It is a bright screen and any reflections from the ambience are nicely hidden away.

A Very Capable Camera: The Poco F3 GT gets three cameras at the back. That’s a 64-megapixel wide camera, an 8-megapixel ultrawide camera and a 2-megapixel macro camera. You can perhaps ask for a few more megapixels for the ultrawide and macro cameras, but that would be just that. This troika is in line with two of its biggest rivals, give or take, and that is a solid foundation to start off on. The Poco F3 GT returns, and I’ll be completely honest here, better photos than I had absolutely expected. And that is particularly true for low light photos, which is where more often than not, phones that cost a lot more also stumble. Close ups of wireless earbuds, plants and even a kid’s tent house in the living room, all in low light, give you the detailing that wouldn’t be categorized as smudgy or soft. And once the lights are turned on or you are outdoors during the day, the cameras return really nice dynamic range, colours that are a tad richer than the OnePlus Nord 2 and a good amount of detailing when you zoom in. Not always, but sometimes the phone just becomes a bit tepid around the upper half of the back panel while using the camera, and I haven’t been able to put my finger on exactly why that is.

Last Word: Poco F3 GT Is The Coolest Android Phone This Side Of The Xiaomi Mi 11 Ultra

There is the perception that Android smartphones are a sea of sameness. While not strictly true, there is some reason why that smoke is visible over the horizon. Phones that buck that trend are still rare, though there’s been more of them in the past 12 months than perhaps the 24 months prior to that. The Poco F3 GT is really dialing that up. It’s been a while since I saw a black phone this exciting. It’s been a while too since a phone’s camera module integrated something as cool as those pulsating lights. Or for that matter, delivered flagship-esque performance at much less than Rs 30,000. And a fast charger bundled in the box. All these things matter even more, when they join together into one package. The MediaTek Dimensity 1200 has given the Poco F3 GT a solid performance base to build on, and that’s exactly what it does. A display that’s larger than its direct competition. Really good cameras. Solid battery life. And well, there’s a lot for gamers too.

Prev: OnePlus 9RT and Buds Z2 have finally made their way to India

Next: Fists fly between 2 drivers on freeway in San Diego after fender bender: Video