Home > HUAWEI > Realme 3i Review: Almost What You Want From A Budget Smartphone

Realme, a sub-brand of popular Chinese smartphone brand Oppo, is constantly spreading its wings, having launched several new devices recently. Just four months ago, Realme launched its Realme 3, and is now out with yet another variant, an all-new Realme 3i, which is even more affordable than the Realme 3. In a highly saturated Indian smartphone market, the major reason people look at Realme phones are their highly competitive price packed with good-enough performance. So, let’s find out if the phone managed to impress us.

Speaking of the design, when we first got our hands on the Realme 3i, the first thing that we noticed was how it looked extremely identical to the Realme C2. Having reviewed the Realme C2 last month, it took us a minute to figure out the difference between the two devices.

Unlike Realme C2, Realme 3i has an added fingerprint sensor and comes in three different color variants (Diamond Red, Diamond Blue, Diamond Black) as opposed to Realme C2 that offers just two colored variants. We tried the Diamond Blue variant where the rear-panel is made up of plastic and has a dual-tone blue metallic sheen. Now, although the design is pretty good for the price, the fact that it looks nearly similar to the already launched Realme C2 is a little off putting. The dual rear camera sits vertically at the upper left corner, right above the LED flash. Again, similar to Realme C2, the Realme logo sits vertically at the lower left in Realme 3i. Also, the Rear-panel comes with a light stripy-textured finish which makes the phone quite smudge-proof.

Realme is meeting the bezel-less smartphone trend head on with its smartphones, and Realme 3i also offers a fairly high screen-to-body ratio of 88.30%. It comes with a dew-drop notch that gives a nice edgy look to the phone. Coming to the display, Realme 3i comes with a 6.2-inch HD+ 1520x720 pixels resolution, an aspect ratio of 19:9, and a Corning Gorilla Glass 3 for extra protection. The colors and contrast of the app icons are quite clear and decent indoors but has poor sunlight legibility. When it comes to streaming movies and videos, quality is pretty decent and also, the screen-size helps with a nice viewing experience. Overall, the display of the phone is quite good for the price without any major misses.

Realme 3i comes powered with octa-core MediaTek Helio P60 SoC with an option of 3GB RAM and 32GB storage, and a 4GB RAM and 64GB storage. Now, although Helio P60 is a pretty decent mid-range smartphone processor, it has become quite old for 2019 (as it also powered Realme 1 last year). It is also less efficient than Helio P70 that powers Realme 3 released four months ago. But, coming to the performance overall, it’s pretty decent. Expect a few stutters here and there when navigating or launching apps like Twitter and Instagram, but it’s nothing too unbearable. We were also able to easily perform all the tasks that can be accomplished using a flagship smartphone with one main difference: the load time for the apps is much slower. Similarly, when it comes to opening an app, sharing a picture, or switching on the phone, it takes a few seconds. However, given the price of the phone, it's almost expected. 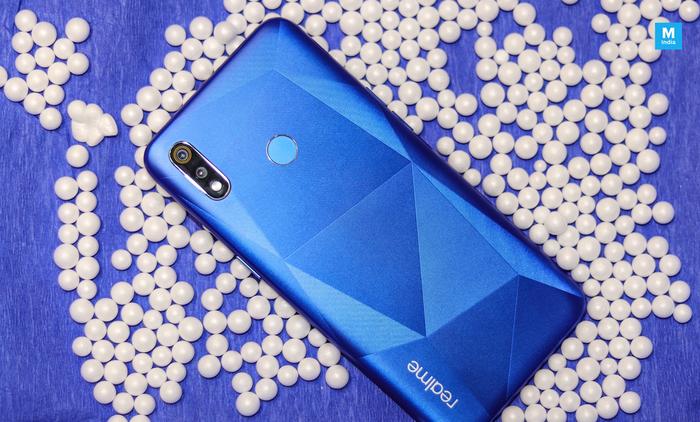 Coming to heavy duty games like PUBG, Realme 3i takes A WHILE to load the game which is quite frustrating. Once the game is on, it runs by default on a medium-graphics setting, compromising on the display experience. Also, although you can play PUBG on the phone, it does suffer through occasional frame drops, especially when switched to high-graphics setting. The stress on the phone also becomes quite evident after a while as you play the game. However, you can definitely play PUBG on the device which given the price point of the phone, is quite applause-worthy. There’s also a game space feature on the phone which frees up resources to help with the overall game optimization.

Realme 3i comes with an impressive battery life, featuring a big 4230mAh AI battery. Now, although charging the device takes over two hours, the battery manages to last for well over a day despite heavy texting, music, video streaming, gaming, and photos. When used lightly, the battery can last for nearly two days which is totally commendable. Moreover, since it’s what Realme likes to call “AI battery”, it comes coupled with features like AI power master and CABC screen power-saving features that adds even more to the overall battery life.

Coming to the software, Realme 3i runs on ColorOS 6.0, built atop Android 9 Pie, which feels quite simple and uncluttered. There isn’t a lot of bloatware to be found, however, there’s a new addition of two folders namely “Hot Apps” and “Hot Games” where the former one includes a bunch of new apps that you can download and the latter one takes you directly to the app market. Now, although these folders can be removed off the main screen, you can’t really get rid of it from the app drawer. Overall, ColorOS is pretty straightforward and helps with the speedy movement. Talking about the audio and speaker quality in Realme 3i, it’s pretty good with nothing much to complain. Also, the phone comes with an added fingerprint sensor and a facial recognition security option to unlock your phone which works just fine except in low light situations.

Speaking of the camera, Realme 3i features an AI dual-camera setup packed with a 13MP primary sensor with f/1.8 aperture and a 2MP depth sensor. Also, similar to Realme 3, Realme 3i features a 13MP front camera for selfies. Other camera features include time-lapse, panorama, HDR, expert, slo-mo, Chroma Boost, and Night Scape. Coming down to the performance of the camera, it works quite decent indoors as well as outdoors during day-light. However, the images lack the crispness and the overall balance between exposure and contrast is slightly off.

The 13MP front camera works pretty decently indoors and in bright light situations, but lacks clarity and has a problem with high-contrast scenarios. There’s an added beauty mode which adds smoothness to the overall picture, which can look quite unnatural at times. The Portrait Mode selfie photo looks better in Realme 3i with no blown-out areas. It also adds a nice amount of bokeh effect. However, the camera disappoints in low-light and produces pretty grainy selfies which is a turn off.

Good looks, great battery life, and a decent processor makes Realme 3i a capable enough smartphone and a good enough new entry to the budget segment. Although the phone features the same old design and an average camera, its positives outweigh the negatives and earns over some of the top budget smartphones in the market today.

Prev: Realme GT 5G Master Edition is in the works

Next: Best smart glasses | The most exciting models: current and future