What has already become apparent in recent years became clear at MWC 2022 at the latest! In the future, we will probably regularly spend time in virtual, augmented, or mixed reality. Or in good old English:AugmentedReality (AR),VirtualReality (VR), andMixedReality (MR)! Smart Glasses seem to be emerging as an exciting avenue for such use cases.

At least if you look at the developments of big brands like Apple, Xiaomi, TCL, and others. To differentiate this article from VR glasses like the HTC Vive Flow, I would like to start with a definition of "Smart Glasses".

What do we actually mean by smart glasses?

As we understand it, Smart Glasses are electronic eyewear that can present you with digital content via screens in front of your eyes or speakers at your ears. Alternatively or additionally, they can accept videos or make calls via cameras and microphones.

They are "networked" and thus communicate with the internet via Wi-Fi or your cell phone. The difference between them and virtual reality glasses, however, is that they work with transparent screens and don't replace your field of vision with a digital display.

The best smart glasses: these models are already available

One of the first providers of smart glasses to the general public was Bose! With the various Frames models, the audio experts offer sunglasses with integrated speakers that connect to your phone via Bluetooth. Like a pair of in-ear Bluetooth headphones, you can play music or make calls via integrated microphones. However, the sound is significantly different than with classic headphones. 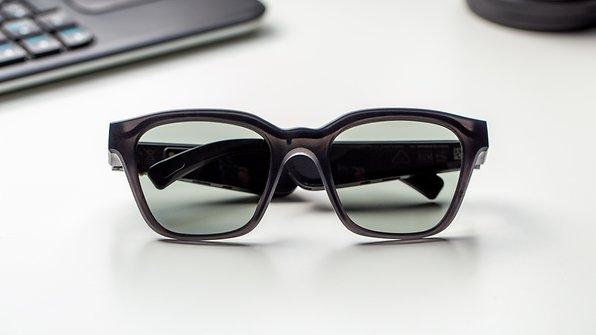 Because as you can read in our review of the Bose Frames, your ears are not shielded from ambient noise. As a result, you perceive the surroundings better in traffic but have to settle for a poorer music experience. The Bose Frames lack bass in particular, and the volume is also not comparable with conventional headphones. The following Bose Frames models are available in March 2022.

The different models mainly differ in shape, which changes from round lenses to a design that looks more like cycling sunglasses. In terms of price, you'll have to be prepared for recommended retail prices between $199 and $249 for the cheapest model.

The manufacturer Fauna caused a stir with an interesting charging system for smart glasses. The Audio Glasses are charged whenever you put them back in the glasses case. In our review of the Fauna Audio Glasses, the charging system for the audio sunglasses was quite convincing. Like the Bose Frames, Fauna's model is an alternative to conventional headphones.

In terms of sound, however, the Audio Glasses were rather mediocre. Furthermore, the battery life of 4 hours is too short despite the cool charging case. The fact that the glasses can't be turned off outside of the case doesn't help, of course. As "smart" sunglasses, however, the Fauna Audio Glasses have an advantage over the Bose models.

That's because the Fauna app can be used to set automatic reminders for drinking water or alarm clocks, for example. The idea is that you keep the glasses on your nose throughout the day, making them a digital companion in everyday life. In terms of price, you have to be prepared for $199.

In collaboration with Facebook, the legendary sunglasses manufacturer Ray-Ban has launched Ray-Ban Stories. You can listen to music and make calls with these, but there's an extra feature compared to the models presented here: cameras are embedded in the left and right sides of the glasses frame. With these, you can take pictures as well as photos.

Via the new Facebook app "View", these can be shared directly with friends and family - and certainly with Facebook's image recognition algorithms. The resolution is 5 megapixels each and the internal memory is said to be able to store up to 500 photos or 30 video clips of 30 seconds. You can trigger recordings by calling out "Hey Facebook."

Facebook's video and photo glasses were met with harsh criticism right at the time of their launch. There is only a small light that informs the person you are talking to that he or she is being filmed. The data processing on Facebook's servers is also a thorn on the side of many security experts. You will have to budget for exactly $299 in the US.

Even before Facebook and Ray-Ban, the social network Snapchat has launched the "Spectacles". The third version features an eye-catching design, two cameras on the left and right in the casing, GPS, Bluetooth 5.0, 4 gigabytes of flash memory, and a 3D function. Thus, it is possible to record 3D content for viewing on VR glasses.

Technically, the Snapchat Spectacles 3 playback videos in HD resolution at 60 frames per second. What's also exciting is that Snapchat includes a 3D viewer in the box. You insert your phone into the viewer and do not need any other accessories to watch the content.

AR glasses from the manufacturer Vuzix

At MWC 2022, we had the opportunity to try out AR glasses from the German manufacturer Vuzix. The AR glasses display content directly in the field of vision of the glasses. The trick: If someone is standing across from you, they cannot see the displayed content. Even though the shown models worked surprisingly well in the short test.

There is one problem: The glasses from Vuzix are rather intended for commercial use. You cannot, for example, watch YouTube videos on the display in the glasses on the train. The manufacturer rather targets the use in combination with drones or for navigation in unknown areas.

Prev: Realme 3i Review: Almost What You Want From A Budget Smartphone