Realme 8i design has been leaked alongside specifications. The key specs revealed MediaTek Helio G96 and 50MP camera apart from a decent set of features. Realme India and Europe CEO Madhav Sheth confirmed the upcoming Realme 8 series phones in the previous episode of ‘Ask Madhav’. The company is yet to confirm the Realme 8i and Realme 8s launch dates in India just yet, expected by September in India.

The current leaks suggest Realme 8i, Realme 8S launch date around September. Realme 8S and Realme 8i Flipkart availability will be confirmed soon as well. Realme already have a diversified Realme 8 series in the country offering three phones as of now: Realme 8, Realme 8 5G and Realme 8 Pro. 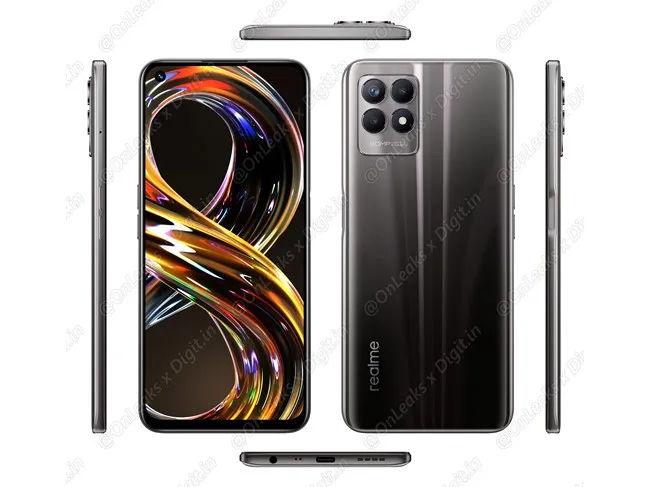 Here’s everything you need to know about Realme 8i India launch.

Realme 8i will come with a punch-hole cutout at the top-left corner with a triple camera system at the back inside a square module. The fingerprint sensor will be on the right side embedded within the power button, while the USB Type-C port, 3.5mm audio jack and speaker grille are at the bottom. Realme 8i will sport a 6.59-inch Full HD+ display offering 120Hz refresh rate, punch-hole cutout and slim bezels.

The phone is said to have a polycarbonate body. Realme 8i will be the first phone to be powered by the MediaTek Helio G96 with two Cortex-A76 cores clocked up to 2.05GHz and six Cortex-A55 cores paired with Mali-G57 MC2 GPU. Realme 8i will come with 4GB RAM and 128GB UFS 2.2 storage.

Realme 8i will boast a triple camera setup at the back featuring a 50MP primary sensor, a 8MP wide angle camera and a 2MP macro camera. Upfront, Realme 8i will come with a 16MP snapper. The upcoming Realme phone will be backed by a sizable 5,000mAh battery with at least 30W fast charging support, yet to be confirmed though.

Realme 8i Price In India, Realme 8i Flipkart: Realme 8i India Launch?

Realme 8S and Realme 8i India launch will happen by September, yet to be confirmed. Realme 8i price in India may start at around Rs 12,000 for the base model. The device will be available with upto 128GB storage. Realme India and Europe CEO Madhav Sheth already confirmed the upcoming Realme 8 series phones in the previous episode of ‘Ask Madhav’.

The company is yet to confirm the Realme 8i launch date in India, expected by September in the country. Realme 8i Flipkart availability is expected to be confirmed soon.