Caught in a sort of no-where-land between laptops and smartphones, tablet PCs, as a form factor, have not quite lived up to their hype. The answer may lie in the industry's possibly flawed perception of the 'sweet spot' in tablet size — around 7 inches. 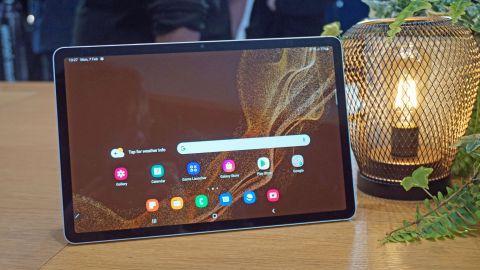 With phones getting bigger this year — most flagships are nudging 6.4 inches — buyers see no value in a device only slightly larger, and minus the superior cameras of a smartphone. Samsung has smaller tablets — but its new model, Galaxy Tab A, brushes aside all comparisons with a phone, with a jumbo 10.5 inch screen. In fact the mantra seems to be: big is beautiful. Hence a hefty 7300mAh battery that is good to go for some 14 hours, and four surround-sound speakers offering theatre-quality Dolby Atmos.

The cameras at 8MP rear and 5MP front are no competition for even middle-level phones, but that is a battle that has been lost some time back. I am somewhat surprised that Samsung has provided just 3GB of RAM and 32GB of on board storage expandable by microSD with another 400GB. Here is why: This tablet's USP if one can guess is its role as an entertainer: Indeed I checked out some YouTubes and they looked and sounded great: so a little extra storage would have been handy. The Kids Mode will be useful for parents who give children games-loaded tablets to keep them out of mischief. The screen is sub-HD, again a compromise I can’t quite understand. But the sturdy Samsung build, the latest Android Oreo and the 4G SIM will probably persuade buyers that the asking price, a whisker short of Rs 30,000, is decent value.

Next: How to Fix YouTube Picture-in-Picture (PiP) Not Working on Android