In-car touchscreen infotainment systems have become an essential commodity in vehicles these days. Vehicles these days are segregated with the “haves” and “have nots” when it comes to touchscreen displays on the centre of the dash. While nearly every modern car in the Indian market is offered with one, they are usually reserved for the higher trim levels. So if you just want a touchscreen AV receiver in your car, but don’t want to shell out the extra cash for a higher spec version, just for a touchscreen, thankfully the aftermarket industry has multiple solutions at various price points.

One of the most popular brands for audiovisual anything is Sony. Sony products are usually regarded as one of the most reliable tech products money can buy. But coming to the topic at hand, Sony also has a big range of products for in-car audio and head unit systems. So they sent us a test unit of one of their models, the Sony XAV-AX7000.

The aftermarket is littered with touchscreen infotainment systems that predominantly range between the price range of Rs 15,000 – Rs 35,000. These devices usually follow a trend of “the more you pay, the more features you get” philosophy. The AX7000, is a premium model in Sony’s lineup, and sits just a step below the top-spec AX8000, but not by much. At Rs 31,900 MRP, the AX7000 isn’t exactly cheap, but it has some tricks up its sleeve that make it a better option than spending a lot more on a fully specced out new car or also adding a little colour to an older vehicle.

The AX7000 offers a 6.95-inch capacitive anti-glare touchscreen. The screen takes up most of the front of the device for a somewhat bezel-less design. But it doesn’t miss out on buttons on the front for volume control, a voice command button and a few more for a seamless integrated design. Additionally, the front of the head-unit is a double-DIN but integrated into a compact single-DIN chassis. 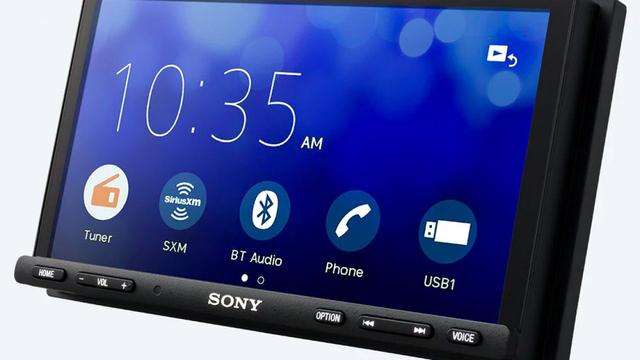 What features does the Sony XAV-AX7000 offers?

The AX7000 comes loaded with features like Apple CarPlay, Android Auto and Weblink. All of that is integrated into Sony’s native user interface. The system offers two USB ports, one that supports fast charging. If your vehicle has steering mounted controls, you can also wire them to the unit. Additionally, it offers voice command and the ability to pair with a reversing camera as well.

However, if you are an audiophile, the party piece of the AX7000 is that the head unit itself comes with an inbuilt Class D amplifier with 2.1 channel subwoofer direct mode. This removes the need for an external amplifier in the vehicle. The unit itself can power 4 speakers at 4ohm and 2ohm loads, sending 50W RMH to each. Digging through the menus, you can find that although there are preset EQ settings. The AX7000 also features a customisable 10-band equaliser and a lot more features for adjustments for sound. This helps make those fine adjustments to tailor the sound perfectly to your car. On top of that, if you like or even don’t like thumping noises of heavy bass, then there is also an Extra Bass mode with three settings — off, 1 and 2.

How does the Sony XAV-AX7000 perform?

While we only had a demo unit, we were not able to properly test out some of the features on the system as a whole. The sound quality is not something we can vouch for at the moment, but if other Sony systems are to go by, we can say that one won’t be disappointed. Same goes for the quality of the microphone which we were not able to test.

What we were able to put through its paces was the touchscreen and how well the system responds and feels. Firstly, the wake-up time of the system is actually quite fast. There are many OEM systems which take far longer to wake up. Once it is powered up, the boot time is almost immediate.

The screen has an optical filter which helps reduce glare. However, it does rob away some of the clarity and the crispness from the screen. Additionally, it seems like it also affects the touch response and feel from the screen which could be improved. Although, shouldn’t be a dealbreaker. The screen resolution is 800×480 meaning that the screen is not HD. While the world has moved to higher resolution formats in other applications, in-car infotainments seem to still be somewhat behind.

With the AX7000, Bluetooth is available for music and phone calls. But a USB connection is required to use Android Auto and Apple CarPlay, both of which work just as intended.

Weblink, on the other hand, is not something I would recommend buying the AX7000 for. It is incredibly slow and when using the video play feature it can be highly distracting while driving. Although there is a fail-safe parking brake lockout, it can be easily bypassed which can be a safety issue.

The AX7000 is a perfect allrounder. Although we didn’t test the sound quality inside a vehicle in an ideal set up, having a Class D amplifier built-in to the unit is pretty cool. This means that not having to buy an external amp thus keeping the weight of the vehicle lower. If that is what you’re looking for, the AX7000 is pretty much a no brainer. The screen itself can be slightly improved and also upgrade to support HD quality. If anyone is looking for the perfect balance of good sound and good user experience, the Sony XAV-AX7000 is the ideal choice.

Next: Week 9 in review: Nokia, Poco, Realme and Honor announcements