Even as the government is facing spending pressures, it is set to redeem, starting from this year, ₹1.30-lakh crore of UPA era oil bonds issued to public sector oil marketing companies in lieu of subsidy borne by them. A principal instalment of ₹10,000 crore will come up for repayment this fiscal year, the first since 2015.

A mechanism of the regulated era, the bonds were issued to the oil companies for not increasing retail prices of petrol and diesel to reflect rising crude oil prices. The ‘under-recoveries’ of the oil companies due to their bearing the subsidy burden was converted into oil bonds by the then government.

According to information available, the last principal payment was made in March 2015, of ₹3,500 crore. The total current outstanding is about ₹1.30-lakh crore, out of which ₹10,000-crore principal and an equal amount as interest is payable this year. 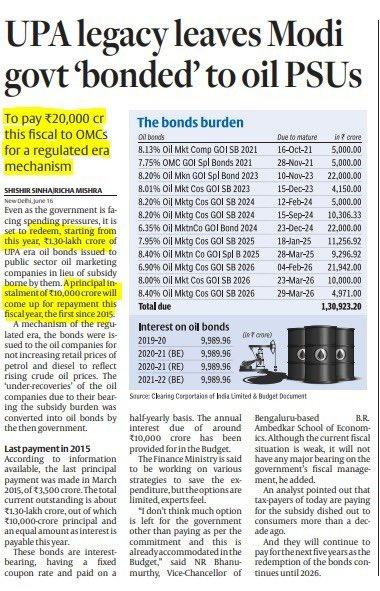 These bonds are interest-bearing, having a fixed coupon rate and paid on a half-yearly basis. The annual interest due of around ₹10,000 crore has been provided for in the Budget.

The Finance Ministry is said to be working on various strategies to save the expenditure, but the options are limited, experts feel.

“I don’t think much option is left for the government other than paying as per the commitment and this is already accommodated in the Budget,” said NR Bhanumurthy, Vice-Chancellor of Bengaluru-based B.R. Ambedkar School of Economics. Although the current fiscal situation is weak, it will not have any major bearing on the government’s fiscal management, he added.

An analyst pointed out that tax-payers of today are paying for the subsidy dished out to consumers more than a decade ago.

And they will continue to pay for the next five years as the redemption of the bonds continues until 2026.

Aditi Nayar, Chief Economist with ICRA, feels cutting excise duties on fuels will extend relief to consumers, while at the same time making the government forego a portion of its Budgeted revenues, which could otherwise be funnelled towards some additional spending to revive growth. “It is a choice between whether foregoing revenue will provide a bigger boost to sentiment and consumption, as compared to targeting higher expenditure towards reviving animal spirits,” she said.